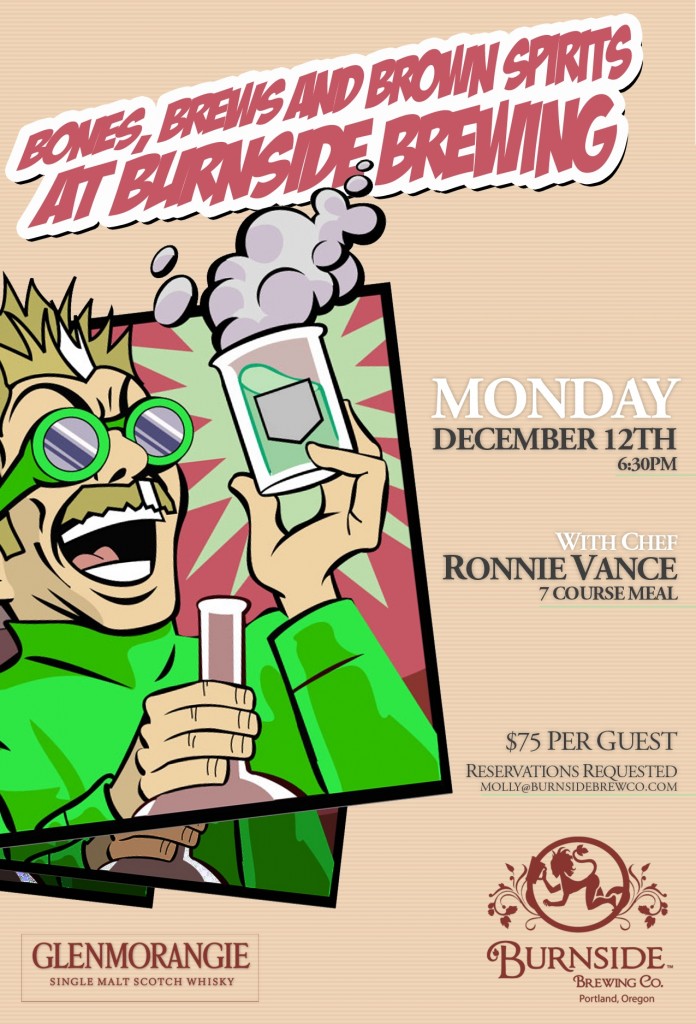 Burnside Brewing’s first ever in-house beer dinner bends the line that constitutes a typical pairing menu by adding spirits and the gastronomical experimentation that the brewpub is known for. Brewmaster Jason Mcadam and Chef Ronnie Vance already have a reputation for  “exciting combinations of food and beer that blur the boundaries” according to Mix Magazine and were picked as one of the top places in Draft Magazine for a beer and food experience.

The Bones, Brews and Brown Spirits dinner throws another loop into the continuously adventurous and playful ongoing food pairing experiments at the pub by using spirits like Glenmorangie scotch, Domaine Chandon bubbles and Grand Marnier along with Burnside Brewing’s house beers.

“The ideology behind the food is to bridge the gap between the Scotch and the beer. After tasting and pairing the beer and liquor based on, not necessarily shared qualities, but flavor and how well they tasted following each other and then emphasizing in tasting notes ,the profiles of each beverage and what contrasted and what “worked” and building foodstuff around those notes in hopes of creating cohesion.”

Such pairing is not easy and few are masters but Chef Ronnie Vance is up to the task and has created one of the more unique menu’s in recent memory. Based on his knowledge of volatile compounds and familiarity with the beers he has attempted to create a sort of DNA strand for each dish so that he may lead the palate over more subtle pairings to a more bold progression by picking an element from one dish to lead to the next.

“Not necessarily a predominant flavor but one that leads suggestively one course to the next. Kinda like sex I.e. foreplay to orgasm and afterglow (cigarette).”

“Serious work with the same tongue in cheek playfulness of what we try to achieve every day.”