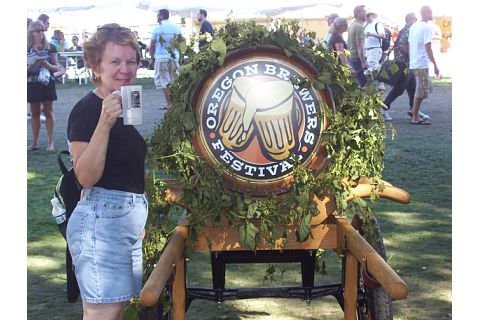 Twenty-three years ago, three local microbreweries – Portland Brewing Co., Widmer Brothers Brewing Co., and BridgePort Brewing Co. – conspired to put on a microbrew festival in the city of Portland. The goal was to bring beers from outside the local market for Portlanders to drink. Microbrews were still fairly new, with only 124 craft breweries across the nation. Festival organizers wanted Portlanders to be able to compare local microbrews with those from other regions, so they would see what was happening elsewhere in the nation.

Thirteen breweries participated in the first year, with a total of sixteen beers on tap. The anticipated attendance was 5,000. When it was all said and done, more than 15,000 poured through the gates. The festival was overwhelmed by the sheer number of people. The weather was hot, and so was the refrigeration, leading to a great quantity of foamy beer. It didn’t matter. People loved the Oregon Brewers Festival!

Fast-forward 23 years: today there are more than 1,400 craft breweries in the U.S., and the Oregon Brewers Festival has thrived, becoming one of the nation’s longest-running and best loved craft beer festivals. It is the premier summer event for anyone who loves craft beer, or is visiting Portland in July. Located on the west bank of the Willamette River, with towering Mt. Hood as a backdrop, the Oregon Brewers Festival is quintessentially Portland, and the ideal venue to relax with friends and sip some suds.

The Oregon Brewers Festival is a true reflection on the immense popularity of American craft brewing, and the fact that the festival continues to draw vast crowds 23 years after its inception is a strong testament to the public’s loyalty toward craft brews. More than 70,000 people will flock to Tom McCall Waterfront Park from all around the world this summer, generating an economic impact of approximately $1.5 million for the city of Portland. The purpose of the Oregon Brewers Festival has always been to provide an opportunity to sample and learn about craft beer. The number of breweries participating has more than quadrupled from that first year, now with 81 craft breweries from across the county showcasing a score of beer styles ranging from Amber to Wit.