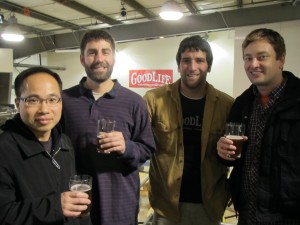 Last month we featured Oregon Brewed Belgian Style Beers. This month at Roscoe’s 3rd Annual Belgian Beer Summit we open the doors to Belgian Style Beers from breweries around the world.  We will also be raffling off a Methusalem of St. Bernardus Abt 12, and giving you a rare opportunity to try beers from Brouwerij Corsendonk on draft.
Some of the Breweries (and beers) to be featured on draft will include: Rodenbach (Grand Cru), Double Mountain (2011 Sacre Bleu), Corsendork (Apple White and others), Gigantic (The City Never Sleeps), Brouwerij Huyghe (2010 Delirium Tremens), Fort George (ABCD), Logsdon (Barrel Aged Seizoen Bretta), Boulder Brewing (Pinot Gris Barrel-Aged Saison), and many more (all on tap).  Beginning at 4pm and while supplies last we will also be pouring tasters of some bottled beers that you won’t want to miss.
Taster trays will be available.  We hope to see you there.