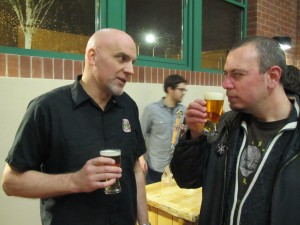 BREWVANA Brewery Tours is hosting a Connoisseur Tour for local craft beer enthusiasts.  The tour features Doug Rehberg,  Widmer Brother Brewery Manager, who will be leading the tour to four local breweries. Taking place Sunday, March 11th from 1-5pm, the tour is $69/ person and is all inclusive.

The tour begins with a beer sampling at Widmer Brewery and a tour of the facility. Doug will introduce himself talk about his history in the brewing industry, his job at Widmer Brewery and lead the beer tasting. The next stop is Burnside brewery lunch and beer will be served.  The Commons Brewery is the next stop, one of Portland’s newest breweries, formally known as Beetje where we will meet owner Mike Wright and sample their unique beers. The final stop will be Cascade Barrel House for a sour beer tasting and with a behind the scene’s tour with barrel- tender and blender, Preston Weesner.

Ticket’s for BREWVANA’s Connoisseur Tour with Doug Rehberg are $69 per person and are all inclusive, consisting of the tours, beer tastings, and lunch.  Register online @ http://www.experiencebrewvana.com/register/?regevent_action=register&event_id=201

Doug is from Walla Walla, Washington but made his beer career in Portland.  In his college days, Doug would sip on craft beers such as Red Hook, Widmer Hefeweizen, and Pyramid while he was getting his degree in Political Science at the University of Washington. “If I could get a hold of a craft beer, I’d try it,” he said, never knowing that he would one day be the brew master and senior manager of brewing operations at Widmer Brewing.

Each month, Brewvana’s Connoisseur Tour gives a different local brewer the opportunity to showcase the beers that they live to brew and create their own tour based on their favorite places around town. It is their chance to share their knowledge of beer with their community.

BREWVANA is the Ultimate Beer Tour Experience, committed to embracing the history and culture of the craft brewing industry in Portland, Oregon. Transportation is provided on a 14-passenger bus equipped with cup holders, a beer inspired mural and the Beeriodic Table for reference.