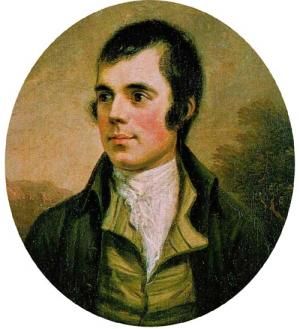 About Robert Burns:
January 25th Scots the world over hold Burns Suppers to toast the memory of Scotland’s National Poet, Robert Burns. Born on a small farm in Peebleshire, Burns learned traditional Scottish folksongs at his mother’s knee, and got a good education in Latin, Greek, and French from his father. Poverty nearly forced Burns to emigrate from Scotland to the West Indies as an indentured servant on tobacco plantations, but at the age of 27 Burns published his first volume of poetry and managed to stay in Scotland. Best known for love poems, and nature poems, Burns also wrote bawdy, rousing ballads, and biting satires of the upper classes. A great champion of beer and whisky in his poems, poverty forced Burns to work as an excise officer, one of the most despised jobs in the civil service (think of it as working for the OLCC). Throughout it all Burns kept his wit and humour, writing the ballad the “Devil’s Away with the Exciseman.”

About Burns Night @ The Hop & Vine
Traditional Burns nights include readings of Burns poems, traditional Scottish music and food, including that “great cheiftan of the puddin’ race,” haggis, “guid ale” and naturally, Scotch whisky. For the Hop and Vine’s Burns Night, we have put together an evening that includes all of those elements. Local beer-writer Abram Goldman-Armstrong, who studied English at Macalester College and Celtic Studies at University College Cork will read Burns poems, and interpret the Scots dialect in which Burns wrote for a modern audience. Music will be provided by the Rendezvous String Band and Pipe Major Tim Birr of the Tualatin Valley Fire and Rescue Pipe Band. The Hop and Vine’s own Yetta Vorobik will conduct a guided whisky tasting. The mighty haggis will be served and a special keg of Boundary Bay Scotch Ale has been procured to toast the bard. Kilts are strongly encouraged. As Burns says “Here’s a bottle and an honest friend! What wad ye wish for mair, man?”