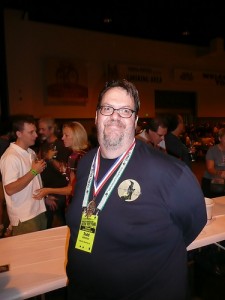 Another Eclipse is coming! But this time you can drink it. Fifty Fifty Brewing’s Eclipse series of Imperial Stouts are aged in select barrels for 225 days. The Bier Stein invites you to taste three of these deep, dark, rare, Bourbon barrel aged beers: Evan Williams, Four Roses, and Heaven Hill’s Rittenhouse Rye.

Brewer Todd Ashman, a pioneer of barrel aging in the U.S., uses 18 different malts and grains; honey; and German and G…erman-derived hops to brew Totality Imperial Stout. The Stout is fermented (25 Plato down to 5 Plato for 9.5%abv), then racked to carefully selected Bourbon barrels from varying distilleries and aged; each barrel is carefully monitored to prevent any souring agents from getting into the final blend. Each version of the stout has qualities unique to its brand of Bourbon, and pairs well with dark chocolate, sharp Cheddar, Rogue Blue, or over ice cream.

Previous iterations of this beer have won awards at beer festivals around the world, and are a prize item in many cellars. Taste these beers, pick your favorite, and take a bottle home ($24.95 for 22oz– yes, these are rare!). Three 4oz. tasters for $12, and the first ten people to buy a flight will get samples of dark chocolate to pair with the beers.

We look forward to sharing this beer experience with you!