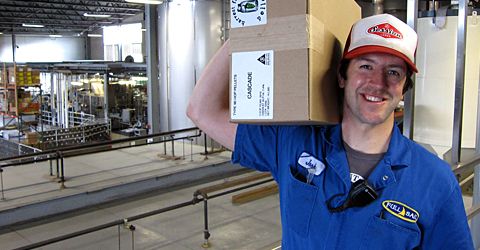 Spring has sprung in the Northwest as the time to revel over winter beers, deep powder lines, and warm fires transitions into time to plant seeds, play with the kids in the yard, bike, hike, and enjoy the rapidly lengthening days. One good way to celebrate the commencement of winter is to enjoy a new one-off beer from Full Sail Brewing.

To commemorate the coming of spring and Earth Month, Full Sail will release a new beer in their Brewer’s Share line up, called “Spring Has Sprung,” crafted by brewer Josh Pfriem. Josh’s brew is a Cascadian Blonde Ale that’s described as “springtime in a glass.” More on this brew from Full Sail:

With its refreshing citrus blast in the nose, silky light body, and crisp bitter finish, at 6.3% it will hold up well on cool, crisp spring evenings. Josh’s hope is that his beer inspires you to grow a garden, hike in the mountains and barbeque with friends and family in the sun!

Spring Has Sprung was brewed with regionally-grown organic Pilsner malt, Pale malt and was hopped with Cascade and Amarillo hops (ABV 6.3% IBU 50). “One of the great things about brewing beer in Oregon is our ingredients are close at hand. About 95% of what we use to brew our beer comes from local sources, and Josh’s beer is no exception; the hops and barley came from Pacific Northwest farms, the yeast was propagated right here in the Hood River Valley, and the water comes right from Mt. Hood. It’s a great place to live and make beer,” said Jamie Emmerson, Full Sail’s Executive Brewmaster.

With each Brewer’s Share series beer, Full Sail picks a local charity to receive a portion of the proceeds from the sale of the beer. Josh has chosen to support the Gorge Grown Food Network. Every keg of Spring Has Sprung benefits this network of citizens and farmers working to build a regional food system in the rural Columbia River Gorge region of Oregon and Washington. The network is devoted to connecting and supporting local farmers and ensuring access to good food for everyone.