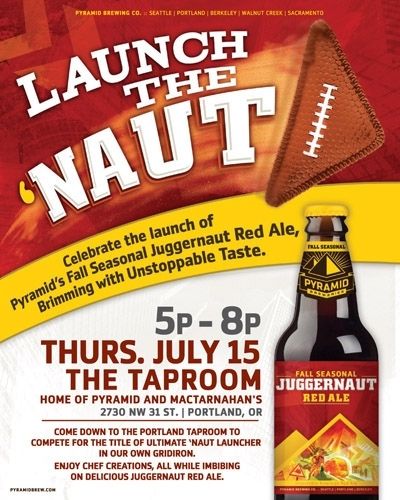 Brimming with unstoppable taste, Juggernaut Red Ale returns for its second year as Pyramid Breweries’ Fall seasonal offering.  The Red Ale crafted to fuel Fall festivities made its well-received debut in 2009 to the open arms and welcoming palates of Pyramid’s many consumers.

Juggernaut is an American Red Ale brimming with delectable caramel malts, delicious hops, and an unquenchable spirit.  Pouring a rich red hue, Juggernaut is balanced in body with subtle caramel flavors that shine through.  Simcoe and Cascade hops compliment the malty character, creating an inviting aroma and finish.  Juggernaut pairs incredibly well with a wide variety of food, including cheeses, red meat, poultry, and fish.
“The return of Juggernaut signals that Fall is approaching,” said Mike Brown, Commissioner of Inspiration and Aspiration for Pyramid Breweries.  “This beer is perfectly primed to compliment the season in which it’s poured – geared up for all the tailgating, warm days and cool nights, and seasonal festivities you can handle.”

Available from August – September, Juggernaut is big on taste but short on time.  The delicious Red Ale is available on draft, in 12oz and 22oz bottles, 6-packs, 12-packs, and as the seasonal star in the Fall Variety 12-pack – alongside of Haywire®  Hefeweizen , Apricot™ Ale, and ThunderHead® IPA.

To celebrate the return of Juggernaut Red Ale, Pyramid Breweries’ will be hosting launch parties in all five of its Alehouses, open to the public: July 15 in Portland, OR; July 16 in Seattle, WA; July 21 in Berkeley, CA; July 22 in Walnut Creek, CA; and, July 23 in Sacramento, CA.