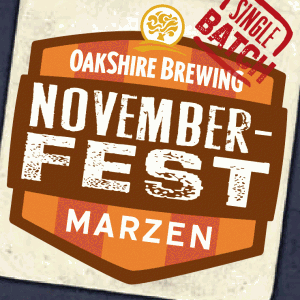 November 1st, we will roll out the next in our Single Batch Series of beers and the 2nd lager we have produced at Oakshire. Novemberfest is a marzen-style lager. With an Orange hue and a biscuity malt body, this lager is hearty, yet smooth. And at 5.8% abv, it is very accessible. You’ll need to be quick, though, our last Single Batch beer, Three Hearted, blew out of the brewery in a mere 8 days. Ring in the election week and get ready for the Holidays with a pint of Novemberfest Lager. As always, Single Batch Beers are draft only, available at the brewery during Dock Sale Hours and also available at select draft establishments who make a habit of rotating rare beer through some or all of their handles. Cheers! Matt