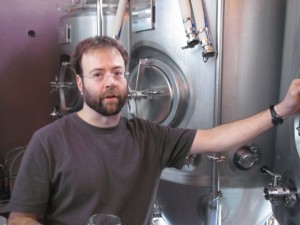 As you might of heard, just shortly after releasing our first run of beers at Old Town Brewing Company, I burned my brewery down. Though the fire was well contained and quickly extinguished, the restaurant and brewery were closed due to smoke and water damage.   The good news is the North Portland location is set to reopen shortly.
In an effort to put off the inevitable shortage in my dwindling inventory, I have reached out to my fellow brewers during this halt in production. Due to short notice and scheduling demands this was a lot to ask. Thankfully, old co workers Charlie Hutchins and B?lt Minister were able to make some magic happen.
From these ashes our collaborative phoenix has arisen: S.,T.E.A.M. (Skot, Together Everyone Achieves More).  Brewing this beer was something of a spirit journey for the three of us as we combined our skills, experience and collective whimsy to bridge the States of Jefferson and Oregon with this Cascadian Common.
S.,T.E.A.M. (Skot, Together Everyone Achieves More) started at 11.8* plato, finishing at 2*, and is a 5.2%abv lager fermented at ale temperatures. We used a blend of European malts and choice Noble hops to interact pleasantly with the soft lager esters. We will be pouring this beer at both locations with a tapping party first at Rock Bottom on Thursday April 12th. Then Charlie, B?lt and I will be at the Old Town Pizza Company’s Downtown location on the following Friday for a social release. We also are looking to acquire guest taps at a few beer bars around town but have yet to have anything confirmed.

Hope to see you there,