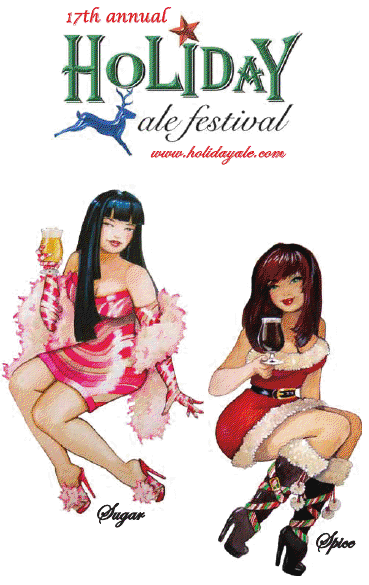 Let’s just cut to the chase. We all know that that the annual Holiday Ale Festival held in Portland, Oregon’s Pioneer Courthouse Square (701 SW Sixth Ave. on the MAX Light Rail line) is one badass beer festival with the biggest of beer lovers in mind. Reality check: It’s probably the best beer festival ever. If not, it is easily in the top five. So when this year’s festivities kick off on November 28 (through December 2) under the heated tents, you better be there!
Here’s all you need to know about this year’s festival including the full lineup of brews, including rare and limited scheduled tappings happening throughout the five day fiasco: 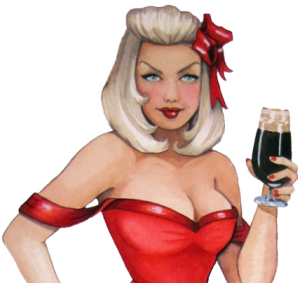 To enter and consume beer, the purchase of an entry package is required. The general admission package at the
door costs $30 and includes the 2012 tasting mug and 10 taster tickets. Advance general admission packages cost
$30 and include the tasting mug, 12 taster tickets and expedited entry all five days. Advance VIP packages are
available for $65 and include the tasting mug, 28 taster tickets, a bottle of water, access to VIP lines (including
special tappings) and express entry all five days. Express re-entry requires a wristband and the 2012 mug, and is
subject to the festival’s capacity. Previous year’s mugs will not be filled. Advance packages are available online at
www.holidayale.com.Once inside the festival, a full mug of beer costs four taster tickets, and a four-ounce taste costs one ticket. Certain
limited release and special tappings may not be available in full mug pours, or may cost double tickets. Additional
beer tickets can be purchased for $1 apiece.

Designated drivers in a party of two or more may purchase a designated driver wristband for $5, which includes
Crater Lake Root Beer or bottled water for the duration of the stay.

Other
The event is for ages 21 and over. 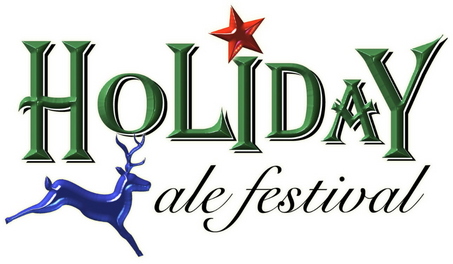 Olde Gnarly Wine Ale has been aging a couple years for your enjoyment. The first sip is for thirst, the second for pleasure. The third is for romance, and the fourth…some say is for pure madness.This favorite of the brewers has been absent for a while, as it was delayed by a brewhouse destroyed at sea.

This Belgian style red ale was brewed in October 2011 with the Belgian Ardennes yeast strain, then aged for a year in CabernetFranc barrels. The resulting beer has a malty and creamy body.

A treat for Santa or yourself, this smooth milk stout was brewed with chocolate black and roast malts for a nutty flavor that’s complemented by the addition of rum soaked raisins.

The brewers filled brandy and Bourbon barrels with a wheat bee brewed with g concentrate. They then added g puree to the barrels to kick up the fruitiness another notch. After six months, those barrels were blended with year-old barrel aged porter and a touch of fresh Imperial stout. Layers of fruit, brandy, caramel, cocoa and coffee make this an ideal beverage to enjoy on a cold winter’s night.

Ward o the winter cold with the warming malty cheer of this strong scotch ale. Very lightly hopped with a hint of smokiness from the peat smoked malt, this big beer is designed to showcase the wonders of the grain. The deep reddish hue and high alcohol content is like a cozy hearth fire.

This beer is golden in color with a smooth and complex mouthfeel. Brewed using Trappist yeast plus late additions of fresh ginger and Minneola orange zest, this beer delivers a smooth wave of citrus on the nose while providing spicy earth qualities on the palate. Feel the Rath exemplifies what monks have created for hundreds of years in Belgian tradition, coupled with a Migration twist that traditionalists can be proud of.

New Belgium Brewing Co • Fort Collins, CO • NewBelgium.com
Frambozen • Belgian-Style Brown Ale
OG 16 • FG 2.8 • 6.5% ABV • 16 IBU
This beer begins with the aroma of fresh red raspberries, followed by the ripe seductiveness of a fruity brown ale with depth and delicate malt notes. It is deep ruby in color, with flavors just as rich.Every year, New Belgium sends a delegate to the Pacific Northwest to oversee the process of turning freshly picked berries into a pure juice to be added in fermentation.
Ninkasi Brewing Co • Eugene, OR • NinkasiBrewing.com
Ancient Ale-ians • Strong Ale
OG 17 • FG 4.5 • 6.9% ABV • 60 IBU
This beer was made in honor of the end of the Mayan calendar and to celebrate the last beer festival of modern civilization. Deep mahogany hued and fermented with an Alt yeast strain, this beer has a clean,toasted malt profile that finishes with a bright citrus and oral hop presence. This beer was conditioned on 80 lbs of chocolate nibs from Theo Chocolates in Seattle, with the addition of Guatemalan coffee from Water Avenue Coffee in Portland to impart a rich flavor with perceived bitterness from the hops, chocolate and coffee.
Oakshire Brewing • Eugene, OR • OakBrew.com
Very Ill Tempered Gnome • American Strong Ale
OG 19.8 • FG 4 • 9% ABV • 80 IBU
Oakshire took its Ill Tempered Gnome and turned it up to 11! Well,9% at least. With more malt, more hops and more flavorful good-ness, you’ll want to seek out this rare and limited Imperial winter ale.VITG has a complex malt profile of caramel, light fruit and toasty nuts and is backed up by a warming alcohol presence and a bold citrus hop blast.
Rock Bottom Brewery • Portland, OR • RockBottom.com
Wenceslas • Bohemian Christmas Pilsner
OG 13.8 • FG 2 • 6.2% ABV • 45 IBU King Wenceslas is not only the patron saint of Czech brewers, he is also the subject of perhaps the most beloved Christmas carol of all time-even though, oddly enough, most people don’t know any of the words past the first line (in fact, for many years, they were lost all together).But if you look up the newly re-discovered lyrics, you’ll find that good King Wenceslas looked down (on the Feast of Stephen), saw a poor man gathering wood, and ordered his page to take the man a jug of a strong,pale lager. Thus was born the traditional Bohemian Christmas Pilsner.
Rogue Brewery • Newport, OR • Rogue.com
Brew 15,000 • Belgian Stout
OG 16 • FG 4.5 • 6.5% ABV • 44 IBU
Brew 15,000 is a very limited, strong, dark ale. It is John Maier’s15,000th brew, and Rogue originally brewed just 1,515 bottles, all of which were autographed by the Master Brewer himself. The brew pours a frothy, dark beige head which gives it a beautiful appearance. You may taste a lingering fruity ester from the Belgian yeast. It’s got a smoky, roasty avor, and a slight edge of mint.
Rusty Truck Brewing Co • Lincoln City, OR • RustyTruckBrewing.com
Cherry Chocoholic Baltic Porter • Baltic Porter
OG 17.5 • FG 4 • 7.2% ABV • 38 IBU
This classic Baltic-style porter was brewed with hulless black barley, dark caramel malt, honey malt and a touch of smoked malt.After a four-week lager fermentation, it was aged on 90 lbs of hand-pressed Willamette Valley cherries per 10-barrel batch, and flavored with natural chocolate avor. Expect big chocolate and cocoa aroma and flavor, balanced by a sweet cherry flavor and finish. It’s dark as night, full-bodied and hopped enough to balance the rich malt and chocolate-cherry profile.

Speakeasy opted for a twist on its perennial favorite, Payback Porter. The brewers took inspiration from the traditional Masala Chai tea, brewing the dark porter with a combination of vanilla bean, ginger, cardamom, clove and black pepper

Stone’s Imperial porter, a tribute to Danny Williams, pours an opaque dark brown with aromas of dark roasted malt, cocoa,vanilla, Bourbon and wood. The taste is much the same, with a woody finish and a Bourbon kick with each sip. The smoke comes out as the beer opens up, but it’s never too strong.

Festivale (pronounced, festive-ale) is one of Terminal Gravity’s most popular beers, annually available from late October through Christmas. 2008 was a particularly tasty year, with a lower terminal gravity and higher ABV than most years. The brewers held back several kegs with the Holiday Ale Festival in mind. It has aged very well, and is now a hoppy, dark copper, strong ale – the perfect pintin which to get lost.

Boysen is a dark, strong, malt forward Belgian ale with dark fruitsadded during maturation. Chocolate notes create a foundation for the boysenberries and yeast esters to ride on.

Bob Barley CDA gets its dark color from de-husked German malts that have been cold-mashed. This process produces a dark beer without the astringent flavor that can often accompany darker malts. 2-Row basemalt, Crystal 120°L, wheat and Caramel Vienne are used to add complexity to this holiday ale. Generous amounts of Magnum and Amarillo hops provide balanced bitterness and hop aroma. When youtaste this beer, you will want to shout “Ya Mon!”

This spiced CDA is Big Black Homo’s jolly little brother. It was brewed with jovial caramel and black malts to provide a jubilant malty character that mirthfully mingles with Summit and Centennial hops. But wait! The merrymaking doesn’t end there; a festive whack of cinnamon sticks were thrown into the kettle, and freshly cracked allspice berries were added during fermentation to further cheer this merry mutha up! JingleTHAT Santa!

Rich oak and vanilla aromas dominate this Imperial red IPA with hints of dark chocolate and caramel. The Bourbon flavors accentuate the subtle sweetness from the vanilla, giving this beer a deep complexity and balance. An earthy fullness makes this beer the perfect winter warmer.