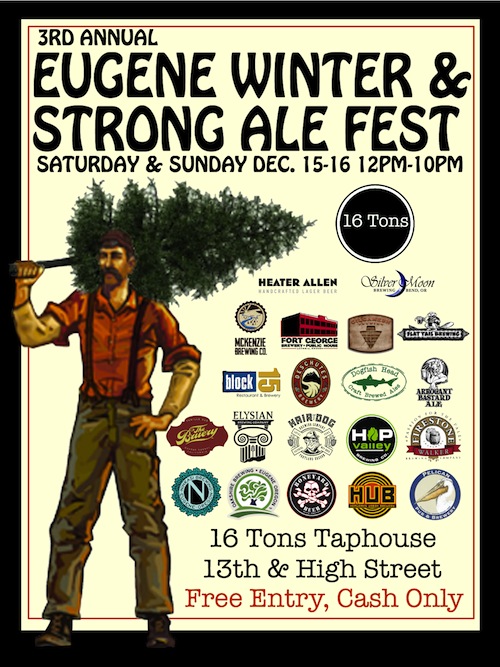 The Festival provides a unique opportunity to sample seasonal, one off, and rare beers from renowned brewers from Oregon and beyond. A few of the most coveted beers include Boneyard’s Suge Knite Imperial Stout (Bend, OR) and Block 15’s Barrel Aged Figgy Pudding (Corvallis, OR) which, like many of the beers, are extremely limited in release and very highly regarded. For the novice and the experienced beer enthusiast this event is an incredibly fun opportunity to sample and savor some of the most sought after beers in the world. Bring your friends and share some sips.

About 16 Tons: Offering Eugene’s largest selection of fresh draft beer to go in eco friendly reusable containers. 16 Tons has a combined 30 taps of rotating craft beers that are available to go or by the pint. 16 Tons Taphouse offers a constantly evolving and updated selection of 300+ craft beers and 250+ wines in bottles, Sake, Cider, and more. Taphouse located on the corner of 13th & High St and Cafe located in Woodfield Station at 2864 Willamette. Info: Mike Coplin (541) 953-2530, mike@sixteentons.biz