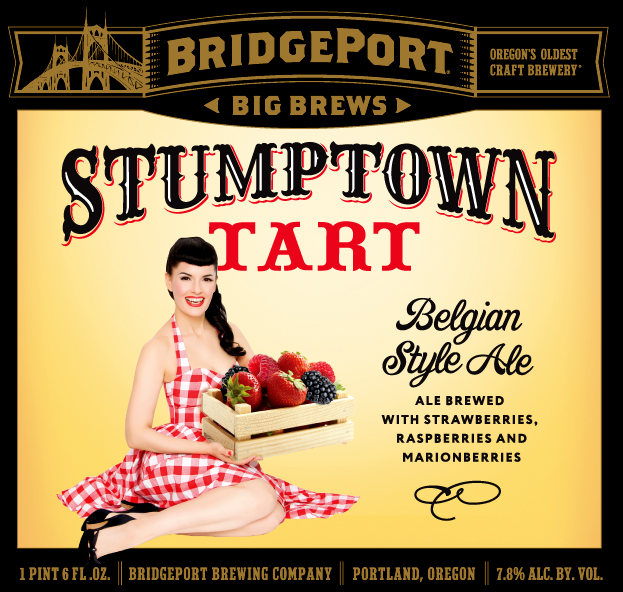 BridgePort Brewing has announced their fifth annual release of Stumptown Tart. Each year this fruit beer has featured a different single fruit variety. For 2012’s Stumptown Tart, the brewery, led by Brewmaster Jeff Edgerton, is employing the use of three different Oregon-sourced berries for the brew. Fermented with Ardennes Belgian yeast, this year’s rendition of Stumptown Tart appears it will be as complex as ever. Here’s the details from the brewery:

BridgePort Brewing Company, Oregon’s oldest craft brewery, is releasing its fifth generation Stumptown Tart on April 5 in Portland. This saucy vixen is back and adding a new twist by combining three of Oregon’s favorite berries – Marionberries, Raspberries and Strawberries – in this year’s Belgian style ale.

This year’s Stumptown Tart gathers 15-pounds of Oregon marionberries, raspberries and strawberries from local growers at Willamette Valley Fruit Company for each barrel of this tasty warm weather favorite. To give a different twist to the base beer, Brewmaster Jeff Edgerton used a new malt from Great Western Malt called “Superior Pilsen”.  The team is also using wheat malt for some mouthfeel, a slight permanent haze and a lighter color that should serve to accentuate any pinks and reds extracted from the berries. In addition, one-third of the base beer will be fermentedwith “Ardennes” Belgian yeast to give a light Belgian character and add to the complexity of the profile.

“The past couple of year’s Stumptown Tart varieties have been building off of the same base beer whereas this year’s ale is completely different,” commented Brewmaster Jeff Edgerton. “It is our first time working with Ardennes Belgian Yeast as well as the Superior Pilsen malt and the whole team here is excited to see the results and how it’s received by those that wait patiently every year for this beer

BridgePortwill host a Stumptown Tart release party Thursday, April 5 from 5:00 p.m. – 8:00 p.m. at Jimmy Mak’s Jazz Club in the Pearl. Free and open to the public, attendees can be among the first to try samples of the new brew while supplies last. Guests will also be given the opportunity to meet the Stumptown Tart herself, bottle model Bernie Dexter, as we celebrate another year of this tasty brew. It wouldn’t be a music club without a few tunes! Levi Dexter and The High Flyers rockabilly band will be bringing the hits for guests to enjoy throughout the night.