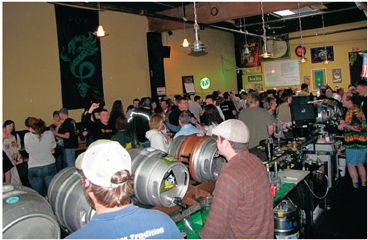 Rogue will host the 4th Annual Firkin Fest at 11:00 AM on Saturday, April 16th at the Green Dragon.
The Firkin Fest will feature unique beers from 30 of Oregon’s top breweries, including Columbia River, Calapooia, Full Sail, Brewer’s Union Local 180, Oakshire, Bridgeport, Hopworks, Laurelwood, Rogue, Bison, Ninkasi, Coalition, Seven Brides, Natian, Upright, Cascade, Burnside, Block 15, Beer Valley, Buckman Village, Deschutes, Fire Mountain, Vertigo, Migration, Issaquah, Alameda, Lucky Lab and North American Breweries. Each brewery will present a beer of its choice, prepared in the traditional English cask-style. Unlike most draft beers, Firkin beers are unpasteurized, unfiltered, naturally carbonated in the cask and served at cellar temperature of approximately 55 degrees.
In addition to showcasing these rare beers, the Green Dragon will provide artisan cheeses, chocolates and meats.
The event will be held in two, three hour sessions. The first will run from 11:00 AM to 2:00 PM. The second session will run from 3:00 PM to 6:00 PM. Tickets are $30 and include admission, eight 6 oz. pours and two food tickets. This is a charity event that benefits the Buckman Elementary School and is sponsored by Food Services of America.

The Green Dragon is located at 928 SE 9th Avenue, Portland, Oregon. Tickets may be purchased in advance starting March 1st at www.rogue.com or in person/by phone at the Green Dragon at (503) 517-0660.