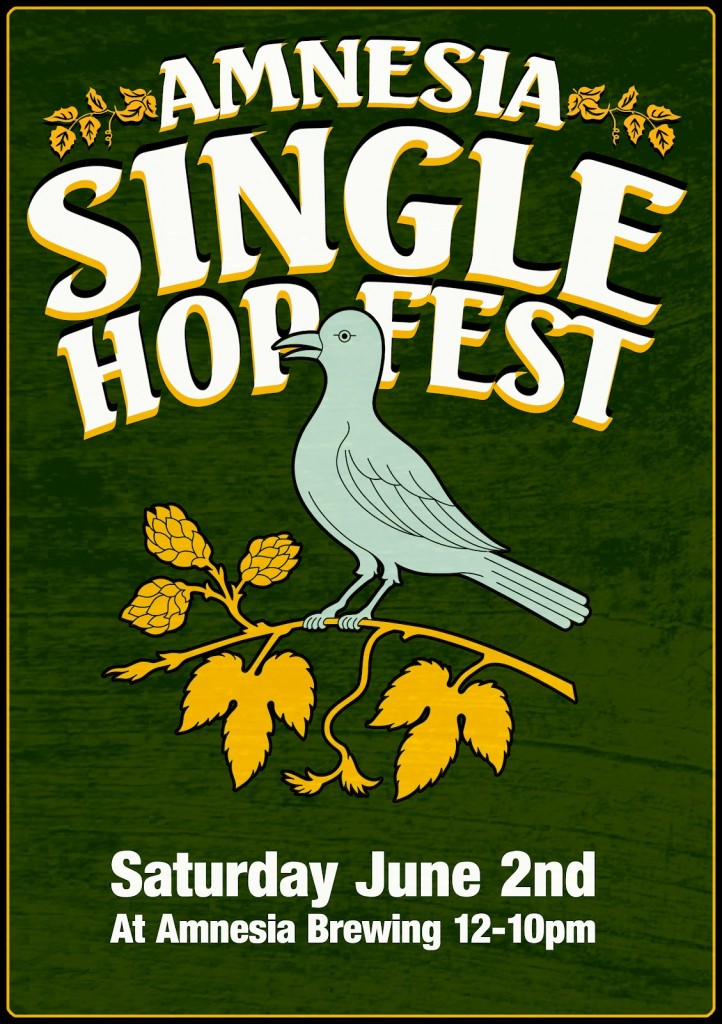 Here’s some details from Amnesia Brewing of Portland, OR about their second annual Single Hop Fest happening on June 2, 2012:

Last year our Single Hop Fest went about as well as it possibly could. It landed on the sunniest day of the year to that point and the crowd was amazing.  Join us again this year on June 2nd as we celebrate more great beers, from several local breweries, made with a single hop varietal. Each beer featured at the fest will represent its own hop variety showcasing the unique qualities of the breed.

Q: Why a Single Hop Fest?

A: A large percentage of the public, outside of brewers and beer nerds, don’t fully realize the impact different varieties of hops have on the characteristics of beer. Sure, most people get that an IPA is dramatically influenced by the amount and variety of hop used, however, hops have an incredible range of flavor, aroma and bittering properties that are imparted in a huge range of styles and each variety can give its own spin on a given style.
Most beers use a little of this and a little of that to take the properties of several varieties to achieve depth and a signature profile but a beer made with just one type of hop can showcase, subtly or not so subtly, the attributes of that varietal and its relationship to the style represented. Also, each beer will have a jar of whole leaf hops, of its particular variety, next to the tap along with a description of the varietal (crossbreeds, where its grown, specs., ect.).  Think of it as hops 101!

We are also proud to be working with Olympic Provisions to provide quality local franks during the festival along with our great brats from Old Country Sausage and our killer cheese burgers, of course.
The Olympic franks will have their serving station by the outside grill where they will be quick and easy to access with a condiment zone near by. All other food items will be orderd as ussual from the bar.
TAP LIST SO FAR: (brewery / hops)