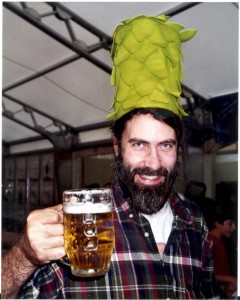 Glen Hay Falconer (1961-2002) was a man who did more than he probably imagined for craft beer in the Pacific Northwest. A young Falconer began his professional career began at Steelhead Brewing in Eugene in 1990. The brewer took his passion to the next level by completing the Siebel Concise Course in Brewing Technology four years later. Soon after, Falconer began working in Newport with Rogue’s John Maier, one of the nation’s most recognized brewmasters. In 1996, Falconer assumed the role of head brewer at the now defunct Wild Duck Brewery of Eugene. His untimely death,a decade ago at the age of 40, was a huge loss to the craft beer world. However, it is quite evident how much he is loved, as his spirit lives on through the Glen Hay Falconer Foundation, a not-for-profit organization with a mission to “contribute to the Northwest craft brewing community by providing opportunities for professional and aspiring brewers to further their knowledge and expertise. The Foundation is also committed to honoring Glen’s broader interests by working with the Northwest Legends Foundation to contribute directly to local Eugene-based organizations that represent his ideals and passions.”

Today the Falconer Foundation offers the opportunity of offering two educational scholarships to the World Academy of Brewing at the Siebel Institute and one to the American Brewer’s Guild. It was recently announced that the 2012 scholarships are now being accepted by the foundation. If you are a brewer or aspiring brewer located here in the Pacific Northwest, you are encouraged to apply. Here are the details:

With the generous co-sponsorship of the Siebel Institute of Technology, the Glen Hay Falconer Foundation is offering two full-tuition brewing education scholarships in 2012.

One scholarship is to the World Brewing Academy Web-based Concise Course in Brewing Technology from August to November 2012. The Concise Course in Brewing Technology is a two-week intensive program that covers every topic critical to successful brewery operations. The program is designed for brewers pursuing a wider knowledge of professional brewing standards and techniques in order to advance their brewing careers as well as individuals planning to enter the brewing industry.

The second scholarship allows candidates to apply for one of three two-week Web-based modules from the International Diploma in Brewing Technology Program.  This specialty brewing scholarship is intended for those brewers who seek an in-depth understanding of a specific brewing discipline.  Candidates must designate which module they wish to attend.

The Concise Course scholarship is open to individuals planning on entering the brewing industry and to professional brewers with no more than three years of brewery work experience.  The specialty brewing scholarship is open only to professional brewers.  Applicants must be from the states of Washington, Oregon, Idaho, Alaska, and Hawaii and California’s northern geographic region (San Francisco Bay/Monterey Bay areas and north).  The full application must be received no later than March 23, 2012. Complete details and scholarship applications are available at www.siebelinstitute.com.

The Glen Hay Falconer Foundation is a non-profit organization dedicated to providing educational opportunities for professional and aspiring craft brewers from the Pacific Northwest to further their knowledge and expertise.  For more information on the Foundation please visit www.glenfalconerfoundation.org.