After being graciously invited to visit Astoria, Oregon by Laura Herbert of Maxwell PR on behalf of the Astoria-Warrenton tourism board, I was contemplating deeply how to spend the 24 hours I would be there most effectively. I knew for certain that Fort George, Wet Dog (Astoria Brewing), and Rogue’s Pier 39 Public House would all be in the equation, but the rest was up in the air. Laura kindly made a reservation for us to stay at a bed and breakfast in town and also outlined a schedule for which to meet with Chris Nemlowill of Fort George and Bolt Minister of Astoria Brewing. Other than that, the possibilities were circling our heads and only a rough idea of what we’d be doing and when remained. 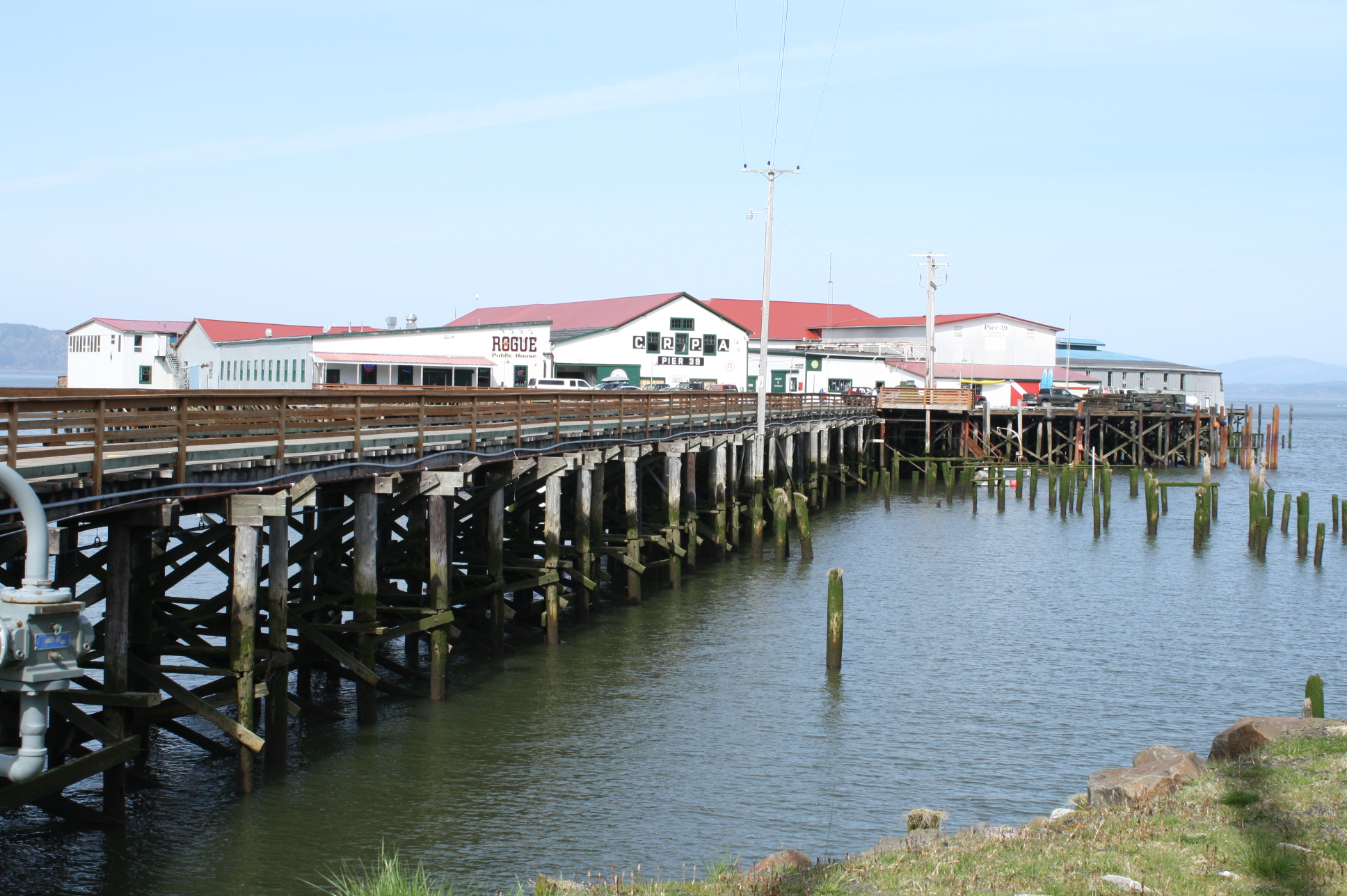 After reading some magnificent pieces in Jeff Alworth’s Beervana blog from his travels the weekend before, I became leary of my ability to generate an original perspective of the picturesque sea port city with a handful of craft beer hot spots. After contemplating what to cover during my 24 hours (some of which I would be asleep), I decided to let go, and let the story come to me. Still, upon meeting each pillar of the Astoria craft brew community and being questioned as to what my recap would entail, I was again reminded of my quest for a thesis and felt obligated to develop a unique angle. 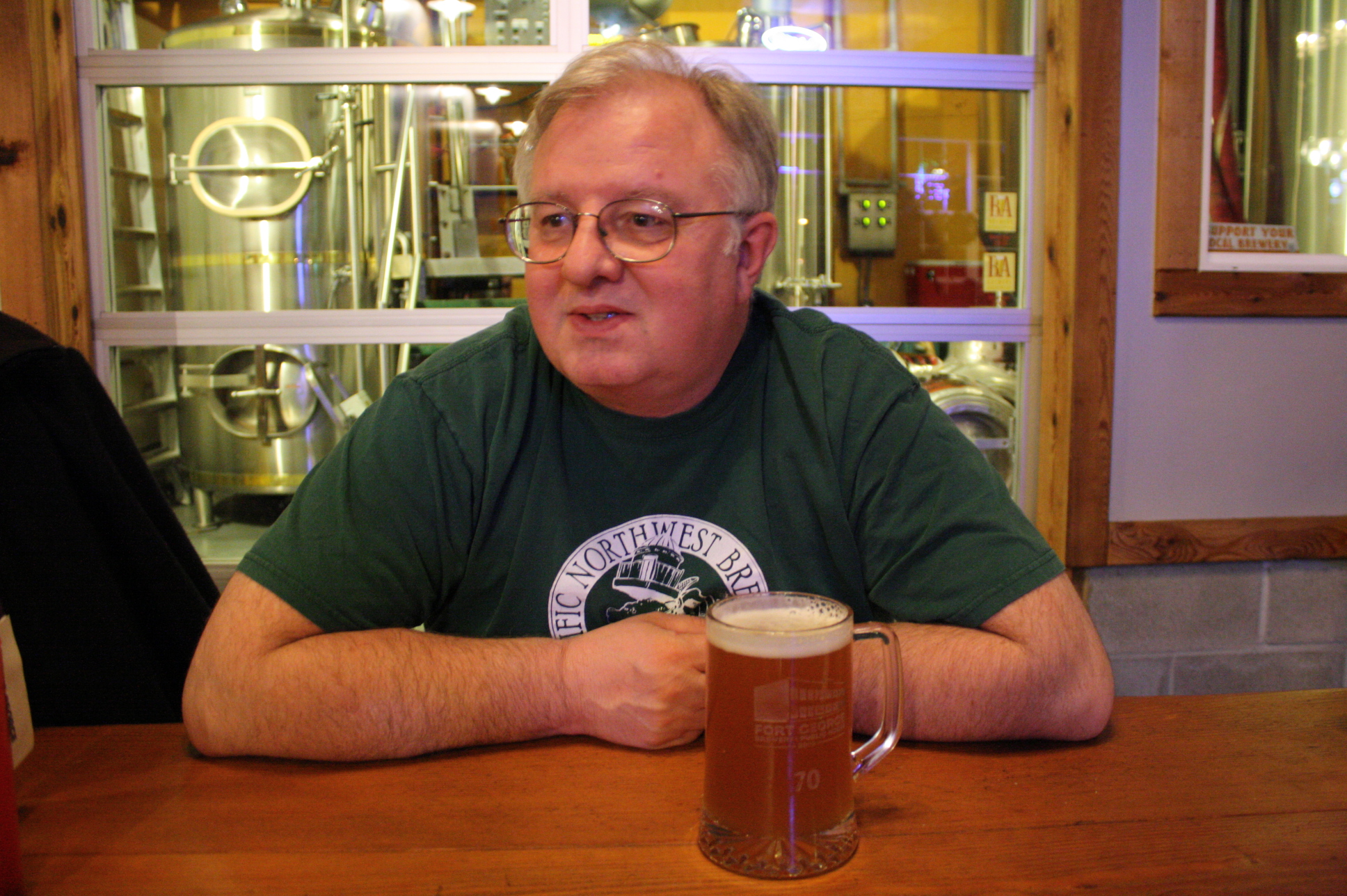 One of the surprises of the trip for me was meeting Dan Bartlett, who played a significant role in educating and entertaining us in many things relating to Astoria’s rich history and passion for craft beer. Dan drove us around Astoria and highlighted the architecture of buildings and even obliged our inquiries about some of our favorite cult movies growing up as kids including The Goonies and Kindergarten Cop. 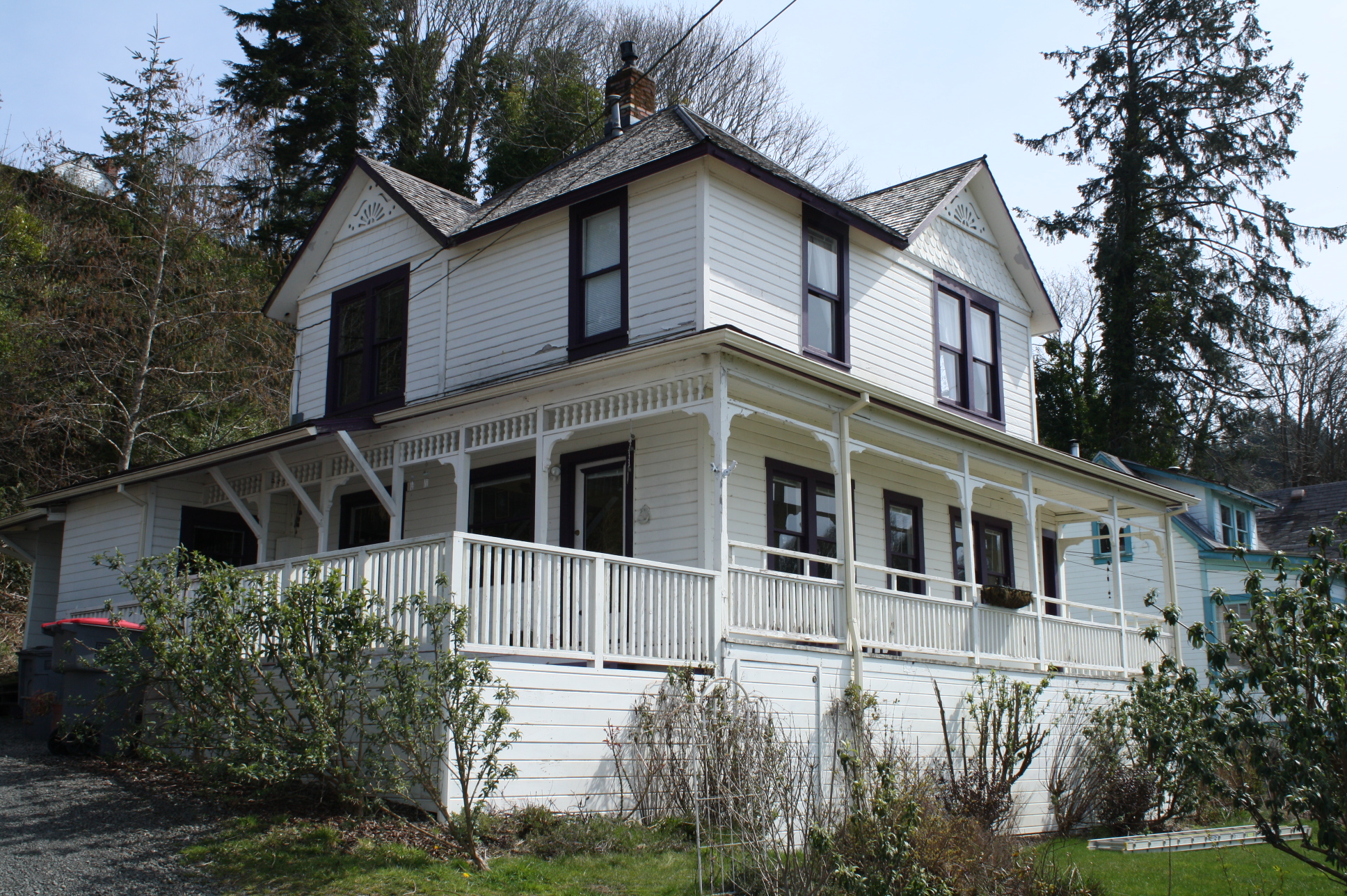 After visiting Fort George and Wet Dog, we headed up the hill south of downtown to our Bed & Breakfast. Now it 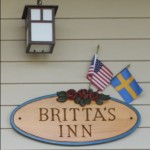 must be noted that I really don’t view myself as the B&B type. Give me a cot and a blanket and I am happy. Besides, I was nervous from a distant memory of when I was a kid and my parents took us to a B&B and the whole interface with strangers and sharing a common space. From an Americanized individualistic shell, I was initially a bit nervous.  But here we were so pleasantly surprised with the relaxed atmosphere of Britta’s Inn looming atop Kensington Avenue. Set in a historical landmark, the house built in 1914 featured a beautiful decor that was a mesh of rustic and contemporary styles. Run by husband and wife team Rona and Skip Davis, we were immediately impressed and relaxed by the open space and Rona, who greeted us.  Original hardwood floors exhibited cross-sectioned old growth slabs unseen in modern architectural design. A grand fireplace was the home’s hearth and giant bay windows allowed for magnificent natural illumination, even during this overcast late afternoon. 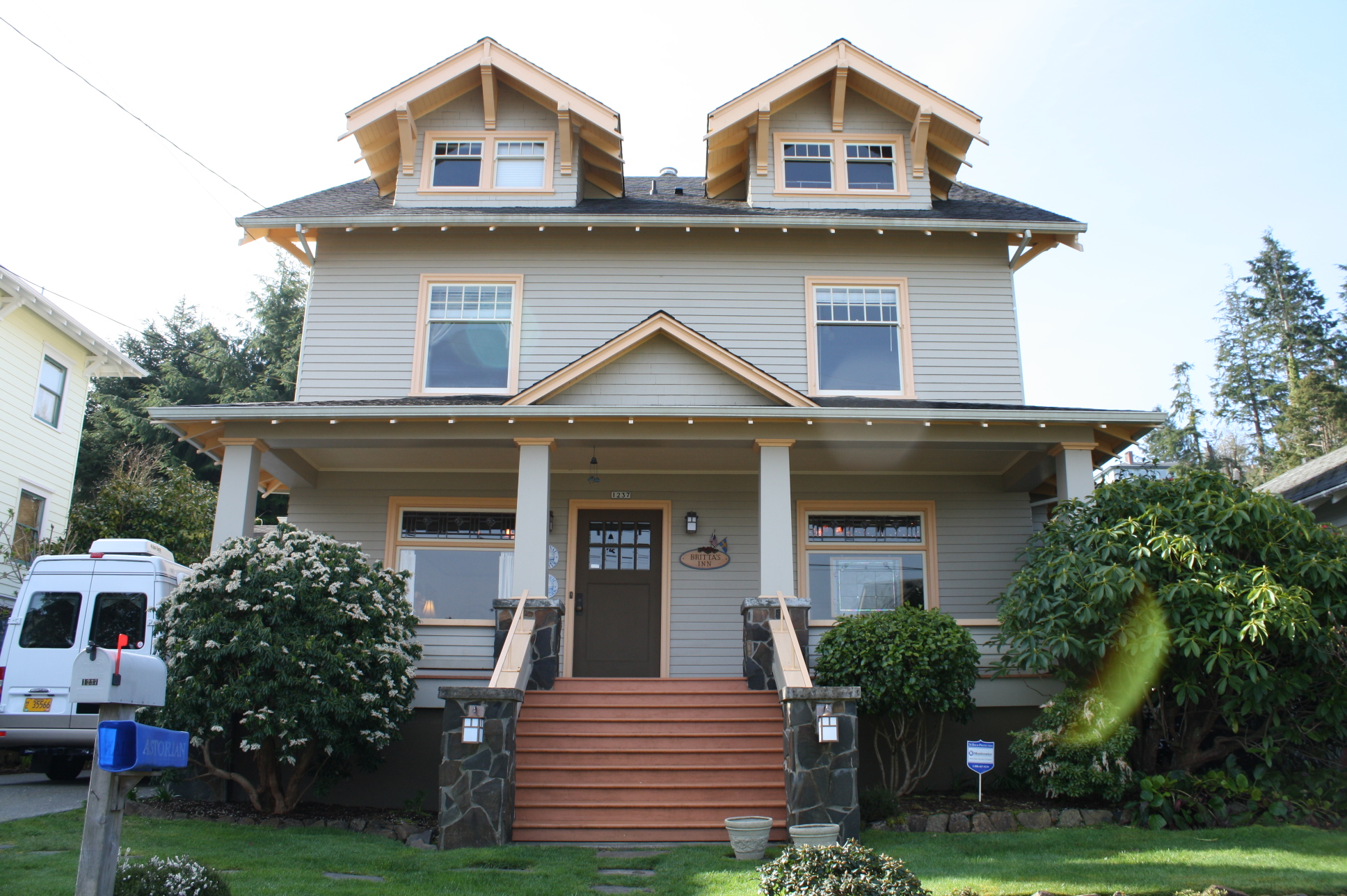 Rona kindly gave us a laundry list of things to do including live music, dining, and historical sites. Again, we were burdened by having too much fun at our fingertips and not enough time to experience it all. Our room was one of two suites on the second floor of the manor-the owners lodged above on the third floor. A northern exposure from our room and the adjacent commons area afforded a magnificent view over downtown and the widened entrance of the great Columbia River. In the adjacent room, a selection of DVDs features some of Astoria’s bests, including our beloved cult classics.  I was nearly overwhelmed with delight.

After our warm greeting by Rona, we reunited with Dan and met his wife Susan for a trip south down the 101. We passed McMenamin’s Sand Trap taproom located on a gorgeous piece of land in neighboring Gearhart. The view to the west of the setting sun indicated that a future trip would be needed to soak in this wonderful piece of paradise with a Terminator Stout or a Hammerhead IPA.

Our destination on this fine evening was Seaside’s Wine & Beer Haus, located off Roosevelt Avenue behind an 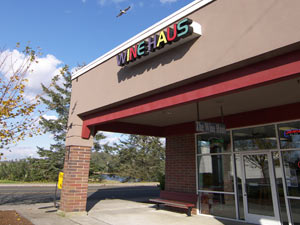 outlet mall. Inside a grand selection of bottled wine and beer greeted us as we walked in.  The man behind the counter, who I believe was named Mike, opened bottles for us and we gathered with other beer geeks. We were with our kind and all felt in balance once again. I enjoyed a Terminal Gravity ESG and a Dogfish Head Aprihop. Dan and Susan’s friends showed us pictures of filled yard glassed on a cellphone.  Before we returned to Astoria, Dan pointed out an official Dogfish Head hop randle that rested atop a beer cooler. I couldn’t exit without purchasing six bottles of beer to go. I’ve said it before, I am addicted to buying beer. 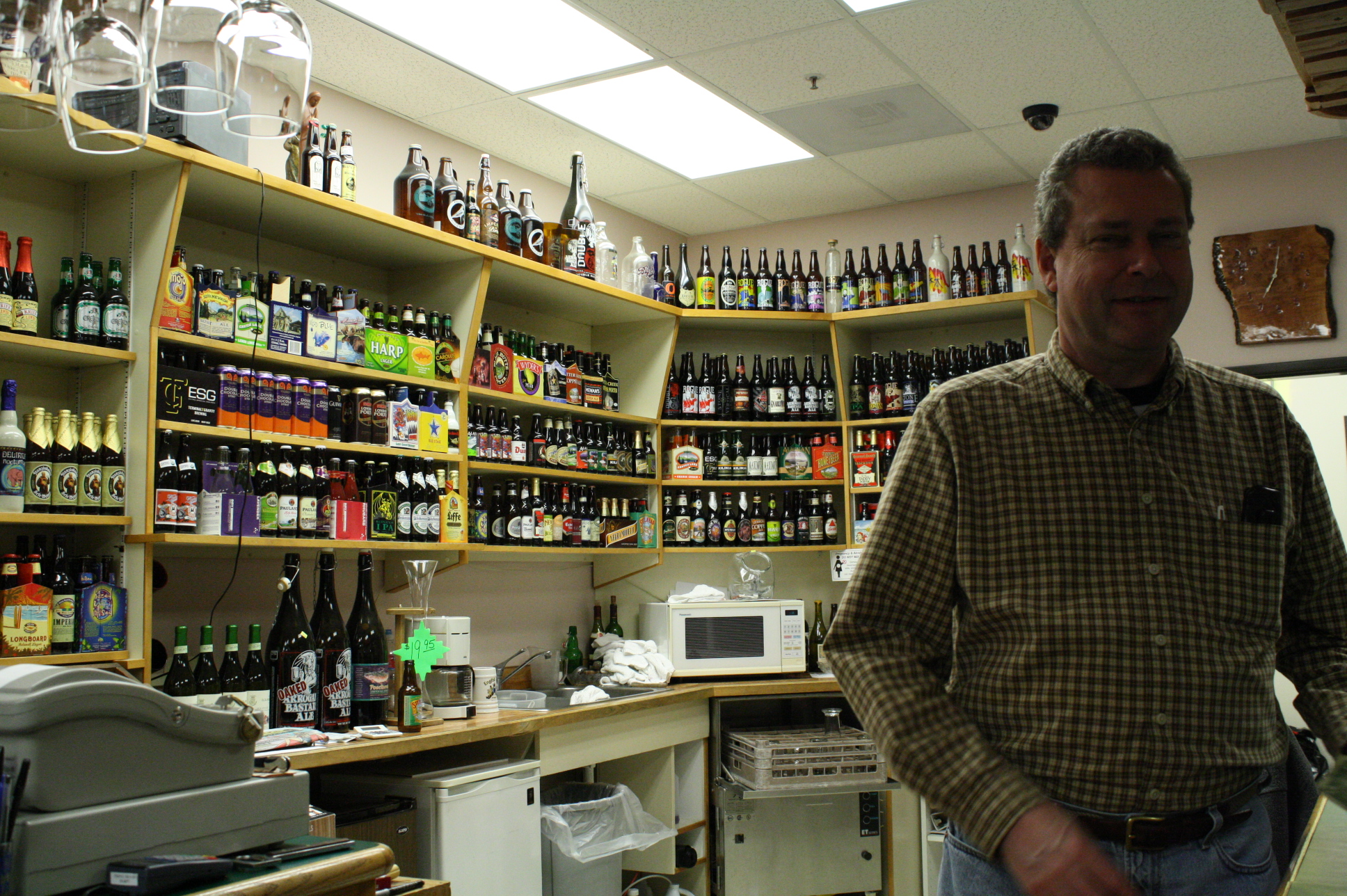 I really have to take my hat off to Dan for his time and sharing his town with us. He waited patently while we embarked upon brewery tours and experienced for the first what was familiar to him. He made us feel welcomed right from the get go. Dan, if you are reading this, the next time you come to Portland, I owe you a beer or two.

Before we called it a night we had to stop back by Fort George to share a beer with Chris who was concluding a double shift. A warming snifter of bourbon barrel-aged Cavatica stout was an appropriate night cap before heading up the hill to the B&B. Back in the room I popped Kindergarten Cop into our DVD player and drifted off to sleep with Arnold keeping “Ahstoreeuh” safe. 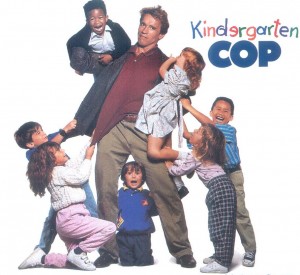