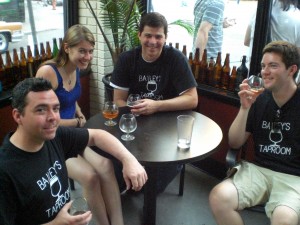 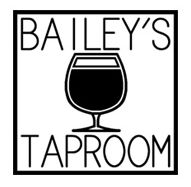 Bailey’s Taproom is unquestionably one of the best craft beer bars we’ve ever set foot inside, and, of course, our standards for beer are pretty high. Proprietor Geoff Phillips and his dedicated crew of beer geeks will be celebrating their third year on Saturday July 31, 2010 with a lineup of specialty barrel-aged brews, to the delight of area beer zealots and those traveling from afar to partake in one of the most anticipated beer events of the year in Portland, Oregon.

In a few recent posts on Bailey’s blog,our friend Geoff divulges some of the rare barrel-aged brews attendees can expect to try. We pulled the following info from Bailey’s site:

Oakshire Very Ill Tempered Gnome was first brewed for the Holiday Ale Fest. Oakshire then took this Strong Winter Ale and aged it in a Sokol Blosser Pinot Noir barrel for five months.

Rogue Juniper John John is a Juniper Pale Ale aged in Rogue’s Juniper Gin barrels. A hint of cucumber and a sprucey note in the aroma are followed by a Juniper bute mid palate finishing with a soft oakiness.

Upright Lambicus Six is the first batch of their Six (a dark Rye) that has been sitting in a Pinot barrel since May ‘09 with brettanomyses lambicus added to it. The result is a Flanders style red/bruin character.

Firestone Parabola has been on of the most popular beers at the past two anniversaries, this beer feattures bold bourbon and tobacco aromas and rich dark chocolate, charred oak flavor.

Fort George ‘09 Illuminator. We’ve been holding on to this one for a year. It is dark brown in appearance, with an intriguing hint of bourbon, rich, malty, and balanced with the dryness of hops and a tart finish. Aged in Heaven Hills bourbon barrels.

Lompoc ‘08 Bourbon LSD. Another beer that we served at our first anniversary and have been hanging on to. This beer was fantastic two years ago, we’ll see what another couple of years of aging did to it.

Jolly Pumpkin Oro de Calabaza is brewed in the Franco-Gelgian tradition of strong golden ales. It is Spicy and peppery with a gentle hop bouquet and the beguiling influence of wild yeast. Aged in Oak barrels. 8% ABV

Full Sail ‘09 Black Gold was initally brewed in Feburary 2008 and released as their Imperial Stout. Full Sail ages a portion in Bourbon casks and releases it a year later as Black Gold. We held on to this for an additonal year. Chocolate and caramel nuances blend with the hops for a smooth Imperial Stout. 10.5% ABV

Allagash ‘08 Curieux is their Belgian Tripel aged in Jim Beam barrels for eight weeks. The beer picks up soft coconut and vanilla characteristics…and also a hint of bourbon flavor. We had this at our first anniversary and then held on to an additional keg. 11% ABV

New Holland Dragon’s Milk has a soft, rich carmael-malt intermingled with deep vanilla tones; all dancing in an oak bath. New Holland brought this beer to OBF a couple years back, I’m guessing there are a couple of people who wouldn’t mind trying it again. 10%ABV

Deschutes Twilight is their summer seasonal that they aged in Pinot barrels.

Hopworks For Those About to Bock. The German brewers of yore knew they’d need a heavier, heartier lager to make it through the late winter months and into the spring. This beer follows that tradition. Brewed in the winter months, under the zodiac of Capricorn, (the sign of the goat), this amber-colored, bready and rich lager rings in at a clean, crisp 6.1% and is stalwart enough to carry any Portlander through til May. For those about to BOCK, We Salute You! Aged in Buffalo Trace barrels since January. 16 Plato 25 IBU 7.1% ABV.

Have a few more beers lined up, but waiting for them to arrive and a little more info about them. Expect one more write up with a beer from Hair of the Dog, Caldera, Lagunitas, Block 15, and Cascade.