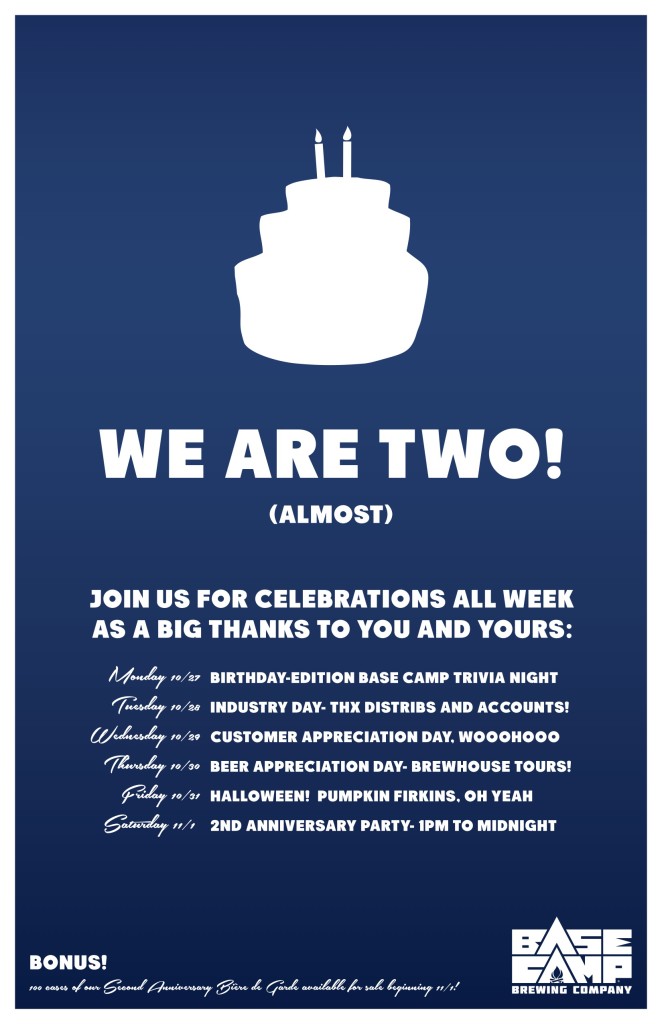 Base Camp Brewing is getting all set to celebrate their 2nd Anniversary with a full week of events beginning on Monday, October 27th and culminating with their anniversary party on Saturday, November 1st.

The week kicks off on Monday, October 28th with their Birthday Edition Base Camp Trivia Night. This is followed up by Industry Day on Tuesday and Customer Appreciation Day on Wednesday. Then on Thursday is when things kick into full gear to end the week with three strong events.

Base Camp’s 2nd Anniversary Brewhouse Tours
Thursday, October 30th
Base Camp Brewing Company is excited to celebrate craft beer with their fellow Portland beer geeks during their Second Anniversary. On October 30th, from 4pm – 7pm Base Camp will be offering 30 minute Beer 101 tours through their custom brewhouse. Join Base Camp’s crew on Thursday to learn about the beer you love!

Special Halloween-Edition Beer Releases
Friday, October 31st
In true Base Camp fashion, we are adding a twist to your Halloween festivities. Base Camp Brewing Company will be tapping special-edition Pumpkin Firkins on Friday, October 31st starting at 5 pm. Carved and ready for the spigot, our Pumpkin Firkins will be pouring S’more Stout and a one-off Pumpkin Ginger Doppelbock. Come in your best Halloween costume and enjoy some true pumpkin beers to celebrate!

Our Halloween special-brewed Pumpkin Ginger Doppelbock is brewed with pumpkin and Bohemian dark malt. Summit hops and a dollop of ginger complement its spicy aroma.  A light bitterness balances out this big lager’s fat maltiness and rich pumpkin taste.

Base Camp Brewing 2nd Anniversary Party
Saturday, November 1st
Base Camp Brewing Company is turning two and it’s time to celebrate! Base Camp’s Second Anniversary Bière de Garde will be released this Saturday at 1 pm. This strong amber, French farmhouse-inspired bière de garde features a subtle dose of Willamette Valley-grown hops and a hint of the floral, citrusy, pepper spice of Grains of Paradise.  We’ll have a limited amount of it available on draft, but the majority of this select brew is hand-bottled and ready for stocking your beer cellar.  As an added bonus, we’re kicking off our barrel program here at Base Camp with two whiskey barrels full of this great-aging beer, to be cellared over the next full year.

Base Camp looks forward to playing hammerschlagen, listening to live music by  Ryan Vandordrecht, and toasting another successful year spent doing what we love with you and yours on November 1st from noon to midnight!