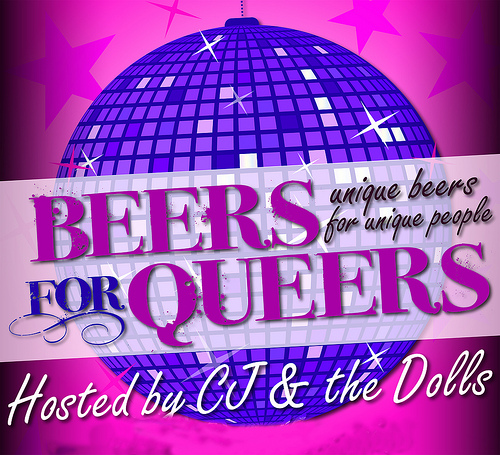 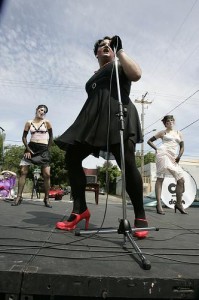 of beers curated by Saraveza’s Mickey Pollizatto.  Pollizatto is the creator and persona, Cabria Jones (CJ), a Tranny Pop Diva who has traveled the world entertaining crowds while sampling a variety of distinct beer styles.  Pollizatto will  be in character for this event and says event is about beer, but without the  music. Says Pollizatto: “I like to keep my act in the night clubs. But that will in no way take away from this party.”  It is also stressed that this event is not simply a beer night for the gay community. “Sarah (Pederson, owner of Saraveza) and I both have an interest in getting more unique people into good beer. The more interesting and diverse the better. (Beers For Queers) is a party to celebrate beer with Trans, Butch, Femmes, Sissy, Freaks, Geeks, their Allies and any other people who fall outside the Hetero, or even the newly established Homo-Normative profile.”

So what can people expect at this festive event?

Says Pollizatto “I have selected five west coast beers that I enjoy best. Spence (Lack, Saraveza’s head chef) has been given that list and will be preparing five courses of tavern treats to be passed during the party.” To make things more exciting, pub employees will be dressed up in and named as “Dolls” such as in CJ’s performance, to serve patrons for the evening. Pollizatto adds “One of my Dolls even put together a killer electro-retro playlist for the party. And just because, I will edit together some campy clips to play in the back ground while everyone mingles and chats about the brews.”

As for the beer line-up, f

ive one-of-a-kind West Coast favorites will be paired with five courses of housemade hors d’oeuvres. For the die hard queer beer geeks, Green Flash Brewing’s “Le Freak” will make it’s Oregon draft debut at this event. Pollizatto says “It seems the request to Green Flash from little old me sparked an interest in offering Le Freak in kegs in Oregon on a permanent basis.”  Sweet! There will also be a keg of 2008 Cascade Apricot Ale pouring.

Regarding the inaugural Oregon pour of the Green Flash beer, Pollizatto says “(It is) just another reason to associate the word ‘Freak’ with me. This is such a hot item though that I have had 60 year old straight men express an interest in coming just for that. I say if you can hang you’re invited.” As for the other beer styles,  Pollizatto says “if you want to know more about my picks you’ve got to come to the party!”

Tickets for Beers For Queers are available at Saraveza (1004 N. Killingsworth, Portland, Oregon), $45 in advance. $50 at the door!

More on Mickey Pollizatto’s history with and appreciation for beer:

“I have worked in restaurants my whole life. Of course I have been educated in wine more than I really will ever need to be. I’ve always preferred beer because I don’t like to drink much and, on the whole, beer is lower in alcohol and more filling. Also I just like the stuff. I’ve branch out and try new things but not until I started working at Saraveza have I really been given the opportunity to learn and discover more about beer as a beverage, a craft, a phenomena. In fact, every Tuesday at dance rehearsals for CJ and the Dolls, I have at least two or three beers for us to sip on and we chat about them. It’s nice and it’s become a big part of my life. I would never consider myself to be an intense Beer Geek, but I do like hanging around them.

“Usually I prefer German beers and I love whats coming out of Italy and Norway. CJ likes to tour through Europe and spends lots of time in Berlin so that usually gives a bias to my palette. Since I decided to pick only West Coast beers you’ll be surprised at what I picked to represent my favorite beer, Schwarz . I tried many different versions and almost gave up.  Sarah made a great suggestion about a beer I didn’t even think of and, well you’ll see…”

To find learn more about CJ and the Dolls, visit her website: http://cjandthedolls.com

Look for Beers For Queers to be a semi-regular event at Saraveza. For more info on Saraveza and their events, visit http://saraveza.com