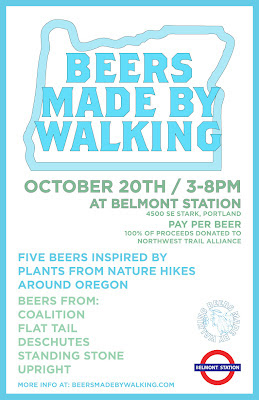 Our friend Eric Steen of the craft beer blog Focus on the Beer has been diligently working on a wonderfully inspirational series called Beers Made By Walking. 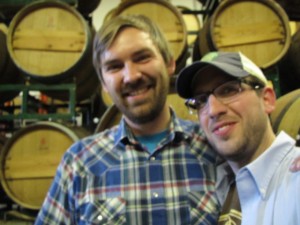 Steen, a Portland, OR transplant now living, working, and quaffing in Colorado Springs, CO where he curates art, nature, and botanicals, into his latest beer-art  series. Beers Made By Walking is “a program that invites brewers to make beer inspired by nature hikes and urban walks. Each walk is different, each beer is a portrait of that landscape. The program happens in multiple cities each year.” This series has become quite a hit for craft beer enthusiasts around the Rocky Mountains and even drummed up national recognition when it was featured in Draft Magazine (read here).

Now, the series makes a stop in Portland at Belmont Station and will showcase some of the Pacific Northwest’s most imaginative and creative breweries showcasing some mouthwateringly unique one-offs. These will include Standing Stone (Ashland, OR), Upright (Portland), Flat Tail (Corvallis, OR), Coalition (Portland), and Deschutes (Bend, OR). No tickets necessary for this event, just pay by the beer. 100% of the proceeds from these beers will benefit Northwest Trail Alliance.

Here’s the full scoop from Eric:

Beers Made By Walking is a program that invites brewers to make beer inspired by nature hikes and urban walks. Each walk is different, each beer is a portrait of that landscape. This summer we invited five breweries to go on nature walks. A botanist/herbalist on each hike identified edible and medicinal plants along the trail and these plants were then used to create innovative beers. We invited brewers in distinct parts of the state and the participating brewers are Coalition and Upright (Portland), Flat Tail (Corvallis), Standing Stone (Ashland), and Deschutes (Bend). The beers are experimental in nature

On October 20th, join us as we tap these five beers inspired by hiking trails in different parts of Oregon. The beers will be available together for one night only, from 3-8pm. From 3-5pm you will have the chance to meet the brewers from Coalition, Flat Tail, Deschutes, Standing Stone, and Upright. Visitors will pay per beer and 100% of the proceeds from this event will be donated to the Northwest Trail Alliance.

A description of the beers you try at Beers Made By Walking:
Coalition Brewing – Ale with Stinging Nettles and Salmonberry
Deschutes Brewery – IPA with Juniper and Sage
Flat Tail Brewing – Fresh Hop Cherry Saison with Corvallis Cherries and Yarrow
Standing Stone Brewery – Ale with Sweet Root, and Wild Ginger
Upright Brewing –  Saison with Yarrow and Rose