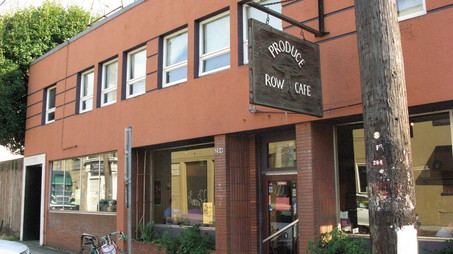 Portland, Oregon – Produce Row Cafe has always been a Portland classic: A place to grab a happy hour drink and a sandwich after work, a place for a night of local music, or a place to chill with a cold pint on the patio during a warm weekend afternoon.

Produce Row is the quintessential Portland pub: Unfussy food done right, an outstanding beer and spirits selection, and a place that is come as you are, anytime of the day or night.

Opened in 1974, Produce Row is named after Portland’s original produce district it inhabits, back when the Rose City was horse carts and carriages, not bicycle lanes and Priuses. Produce Row was also the first McMenamins pub, helping set the tone for Portland’s internationally recognized reputation as a craft brew “Beervana”.  After being sold in 1978, Produce Row continues to draw in regulars and visitors alike for what has been called by Fodor’s Travel Guide as “a huge beer list, a great beer garden, a down-to-earth flavor…”

Yet even classics need a little face lift now and again.

With new ownership in 2008, and new attitude, Produce Row is currently going through an extensive remodel, but keeping the elements that have always made it great. “Think of it as a refresh, not a radical departure,” says owner Alan Davis, “we want to honor history and keep everything our loyal customers love and expect, while bringing the design and menu a bit more forward in sophistication.”

This isn’t trendy fly-by-night décor. Expect a cozy atmosphere, much like you might find in a traditional pub, including antique velvet sofas and club chairs, low lights, as well as art and curiosities procured from around the globe.  Local craftsmen were used for many of the building and design efforts. All the booths are made by Think Designs located just blocks away in the Central Eastside Design District. The bar and extensive woodwork are mahogany wood and custom built by Axiom Designs in St. Johns. Grounding the space is a 15 foot solid butcher block community table that rests on old machine legs and seats 16. It acts as central gathering spot, while smaller tables and nooks provide more intimate seating. In keeping with the neighborhood’s historic vibe, reclaimed wood is featured throughout the interior.

The always popular patio remains, with a few improvements: what was once a raised multi-tiered wooden deck, a style popular in the 1980s, has been transformed into a single ground patio. The new patio maintains the private wooden fenced charm of the old space, but is enhanced by a more open layout, has more covered/heated space, and is designed to enable projection of movies on the adjoining 50 ft. tall concrete wall. A new environmentally friendly water infiltration planter is seamlessly integrated into the patio design using large reclaimed railroad trestles for its perimeters. New cedar siding is coupled with the reclaimed 25 year old siding from the old patio, keeping in the Produce Row spirit of marrying the best of the old with the new.

Beer is still the center of Produce Row’s drink menu, with a range of 24 draught beers and 20 bottles, including local artisan brews and several rare European varieties. Taps include a mixture of popular main-stays and revolving specials. Produce Row is so well loved in the northwest beer community that brewers from Double Mountain Brewery from Hood River, Oregon; Laurelwood Brewery in Portland; and Walking Man Brewing in Stevenson, Washington have partnered to create a special soon-to-be announced Produce Row beer. It will only be available at Produce Row. Details will be revealed when it becomes available on June 12th.

Whiskey is also a feature of Produce Row’s extensive bar offerings, including over 50 different types. The whiskey-beer pairing program launched last year with the assistance of one of the world’s leading whiskey experts, Stuart Ramsey (ramsaysdram.com), puts together the best in both classes to create an innovative pairing menu that’s a terrific way to sample the best in class of both beverages.

Hearty Northwest pub grub has always been a highlight of Produce Row Cafe. Don’t expect foams, infusions, or a menu that requires a dictionary. Do expect items like BBQ Pork Spare Ribs served with Dirty Rice & Bourbon Baked Beans. Sandwiches are the backbone of Produce Row’s menu, and are well loved by regulars. Produce Row’s New York deli style pastrami sandwich is made by well regarded Old World Provisions, from Albany, New York. This sandwich is as good as you’ll get in the best East Coast delis, and features a thick sandwich stuffed with tender meat, gruyere cheese, and pub mustard served on caraway rye bread.

Brunch, served on Saturdays and Sundays from 10 am until 2 pm, is sure to become a popular destination with Portland’s avid brunch crowds. The brunch menu features items like Bread Pudding French Toast topped with whipped cream and seasonal berries. Or, Eggs Benedict with crispy pulled pork in lieu of the traditional ham, served on toasted beer bread and served with an avocado salad and choice of side dish such as cast iron home fries, grits, or seasonal fruit.

In the Heart of the City

The Central Eastside Industrial area, where Produce Row is located has always been a bit off the beaten path. It’s not located on a fancy-schmancy northwest Portland dining row, it’s not in the alternative trendy retail districts like EastBurn, The Pearl District, or Alberta Street, nor is it located in the middle of a dense residential neighborhood. Yet, Produce Row is still in the heart of the city. Located near the Eastbank Esplanade, plenty of live/work artists’ lofts, and projects such as the soon-to-be Eastside streetcar, the Central Eastside is popping. In a city of rapid change, Produce Row is keeping it real.