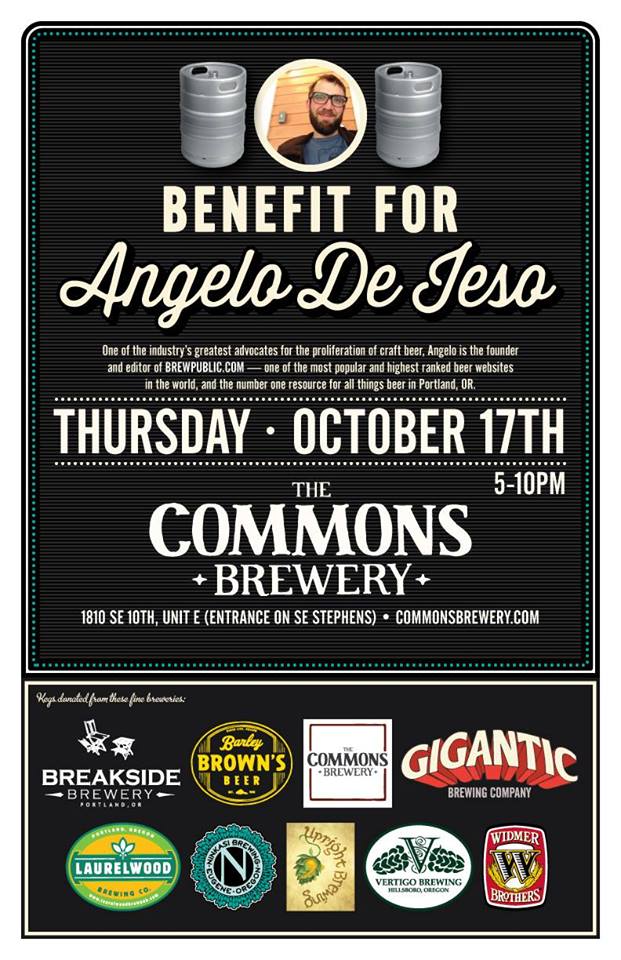 If you ask anyone in or that follows the beer industry in the Pacific Northwest if they know Angelo De Ieso, more than likely this person will have crossed paths with this ambassador of beer. When asked to describe Angelo, only positive adjectives will be used. You can even go farther out from our region. Angelo has followers from across the world. His Brewpublic twitter account has well over 13,500 followers. This is an amazing number. And if you know Angelo you know why he has this many followers, for better or for worse, this guy is glued to social media.

Last month while I was in Seattle I heard some horrific news that my friend and Brewpublic’s founder, Angelo De Ieso, suffered through some intense seizures and was in the hospital at PeaceHealth Sacred Heart Medical Center in Springfield, Oregon. I was able to track Angelo down through his wonderful and caring brother Mario just before Angelo went into brain surgery. The doctors needed to do this so they could do a biopsy on what they found to be a brain tumor. I remembered this call quite vividly as tears were brought to my eyes. How could Angelo be going into brain surgery I asked myself? I just spoke to him a few days prior finalizing some locations for his upcoming KillerBeerWeek. Everything seemed just fine.

Well then and there we knew he was in the doctors hands to find out what was causing these seizures and what lies ahead for him. Angelo’s mother flew out to be there with him in the hospital. Over that first weekend in the hospital some old friends, Shane and JP, from Portland came down to visit him. Even some of Angelo’s favorite brewers, Oakshire’s Matt Van Wyk and Ninkasi’s Jamie Floyd, stopped by to say hello and to lift his spirits. I sure made time to go visit him too. He was his usual joking self while there in his hospital room. Of course he had to tell me how great the Patriots are going to be this NFL season and that the Red Sox will be going to the World Series. I think the meds may have been working on those two statements. 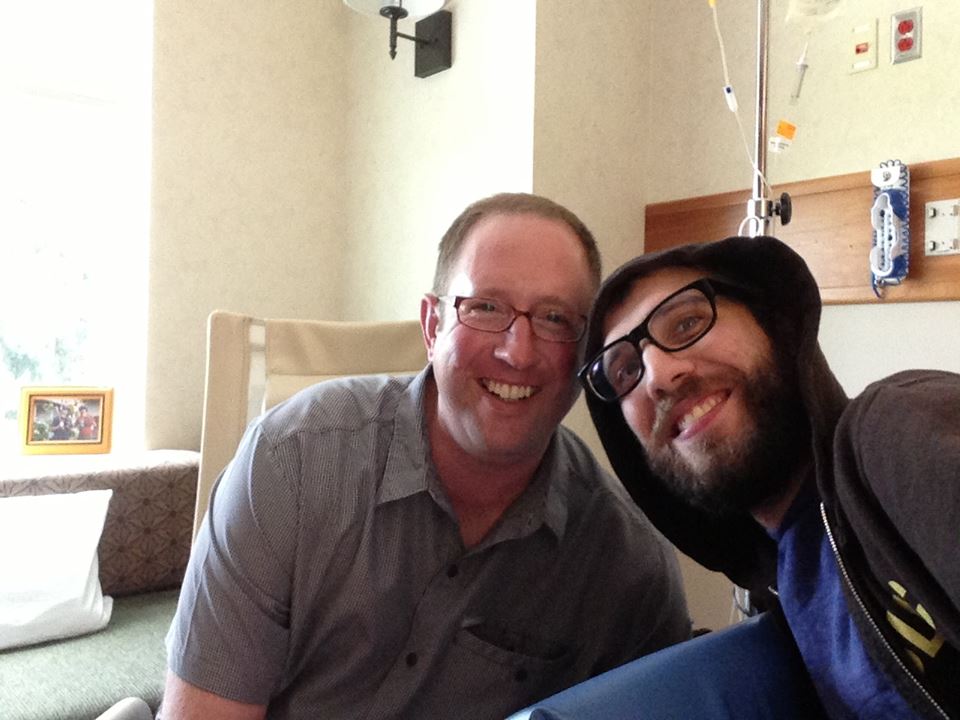 After almost 2 grueling weeks in the hospital Angelo was finally discharged still without any knowledge of the results of the biopsy on his brain tumor. Then the time came last week for him to travel back down to Springfield with his brother to meet with his team of doctors to discuss his biopsy results. Dr. Eller informed him of the great news that the brain tumor is benign. However, Angelo will still have a long road ahead of him since he may continue to suffer from future seizures. And with this comes more and more medical and pharmaceutical costs. 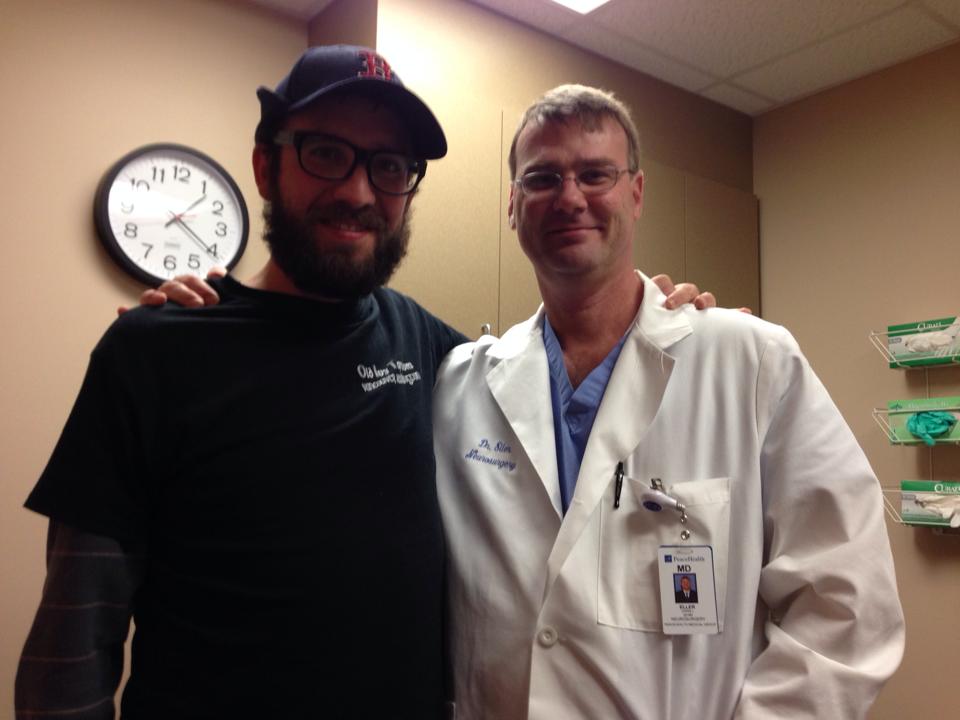 Being in the beer industry Angelo is one that does not have any medical insurance and now faces some astronomical medical bills along with additional medical bills further on down the road.

So this is where you, the avid reader of Brewpublic along with the brewing community can come in with some assistance. There are a few fundraisers that have happened, are happening and will be happening.

Dave and Arlene Nunez kicked things off with a fundraiser a few weeks back at their Old Ivy Taproom and By The Bottle. Then Belmont Station has a tap handle named “Angelo’s Tap” where all proceeds will be donated to Angelo’s medical bills. As of today the beer on tap is Elysian’s 50 Shades of Green Fresh Hop IPA.

The next fundraiser for Angelo will be taking place at The Commons Brewery on Thursday, October 17th from 5:00 – 10:00pm. This event will feature beers from The Commons, Breakside, Deschutes, Fort George, Gigantic, Laurelwood, Ninkasi, Occidental, Upright, Vertigo and Widmer.

“In September 2010, BREWPUBLIC hosted a Microhopic event at Bailey’s Taproom featuring Beetje. It was the first big event for this new start-up and the beginnings of a very strong friendship with one of the best craft beer advocates we know”, Mike Wright, owner of The Commons Brewery. 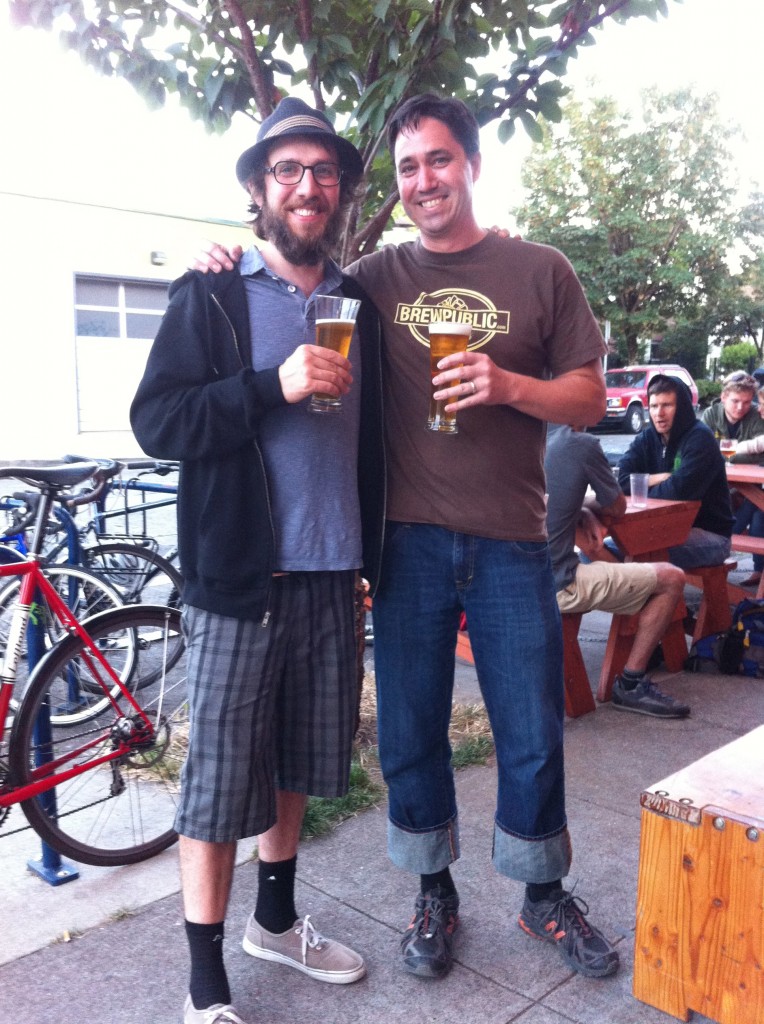 Mike Wright and his fellow brewers hope to return all of his generosity by donating all draft sales from this evening to Angelo’s medical fund. In addition to The Commons beer they will have beers generously donated from several other local breweries.

Please stop by The Commons Brewery on Thursday, October 17th and order a beer or two to toast Angelo. And if you’re really feeling generous you can donate online at Angelo’s Fundly site here. Hope to see the place packed!