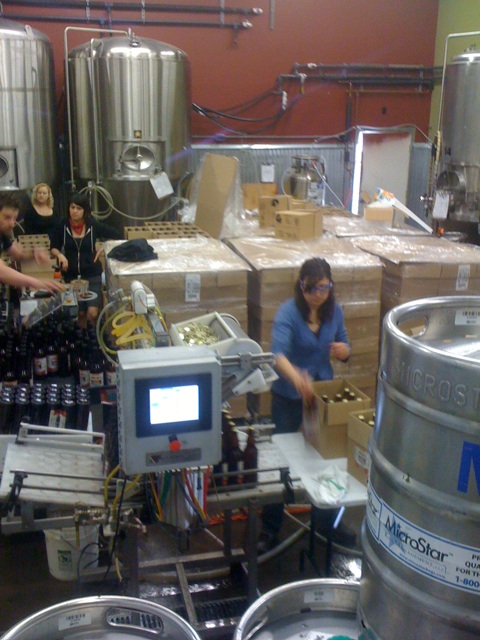 It’s a question brewers get asked quite often. In fact at Oakshire, it seems that every time we do a beer in our Single Batch Series, it is someone’s new favorite and they want it to be bottled. Well, this sparked me to give a little insight on what it takes to get a beer on the shelf at your local mart. Ezra, at The New School Beer Blog, has started a series on a similar idea from the artists perspective as he does much if not all of the artwork for Upright Brewing. Ezra is a great artist and makes outstanding label art. Fortunately for you the consumer of our beer, that is not my arena, but I can tell you about the process from before the beer is made up until the beer is purchased by you and also share some of the headaches involved. And hopefully you’ll see why Oakshire won’t be bottling a one-time only brew where a mere 24 kegs are produced (that’s only about 180 cases of 22 ounce bottles).

Let’s start from the beginning.

Step #1: The beer needs to be made.  Recipe formulated. Beer brewed and fermented.

Step #2: Make up a “creative, I’m a craft brewer”- type name for the beer. This can be done before, after, or in conjunction with step #1.

Step#3: Convey your idea for label art to someone who has much better skill in graphic arts than I do. If the brewer, or a brewers friend can do this, that is great. At Oakshire, we are fortunate to have the talents of Bryan Taylor at Treemen Design who created all the logos and beer labels that we do. Bryan is great to work with and does great graphics. Look for some possible diversions from our core branding in the not too distant future. Step #4: Spend some time going back and forth with that designer until the label looks as you had envisioned. This could involve color changes, wording, or the graphic themselves. I have zero background in consumer marketing, other than the fact that I am a consumer and I get marketed too, but I have learned quite a bit about how the slightest ideas, colors, lines,  and images can affect the purchasing decisions of a consumer. And the beer industry has a whole different market to sell to than other industries.  A lot of time can be spent thinking about what the person across the bar or counter top is going to spend their hard earned money on. We’d all like to believe that the beer is the only motivator, but a lot is conveyed by logos and packaging.  For more on that topic see Jeff Alworth‘s Beervana blog where he has been posting a series about branding in the beer industry. (BTW, Jeff-how about another post on that? I found it most interesting)

Bear with me, and don’t get bored. We’re getting there…..

Step # 5: Once the label is finalized, it is now the Governments turn to take a whack at it.  All beer labels (and wine and spirits too) must be sent to the Tax and Trade Bureau (TTB). This arm of the National government used to be called the Bureau of Alcohol, Tobacco, and Firearms (BATF). Many “old timers” in the craft beer industry still call it that. But since 9-11, the guns and ammo part of it have been separated and the TTB focuses on alcohol regulation. As far as I know, there is one person who approves all beer labels at the TTB. His name is Kent Battle Martin. Yep, and he goes by Battle! Pretty cool name, huh? Also as far as I know, he is a pretty cool guy. However, that doesn’t make it any easier to get things approved on the first shot.  Now, the TTB has made things quite a bit easier as the Certificate of Label Approval (COLA-that means you are good to print it and sell it) can be submitted on-line rather than snail mail. This speeds up the process by several days. Especially because when you make corrections, again on-line, I believe you move to the front of the line on your corrections.  It means you COULD receive label approval in 7-10 days. BUT, it’s not quite that simple.  The TTB has several requirements that must be met. Obviously, you don’t want to hear them all, but to highlight a few: The Government Warning MUST be a certain size font and on a contrasting background. No exceptions. You can’t use words like Strong or Extra Strength on the label even if it is a Strong Ale. You can’t use images of flags. Not even the United States. Rogue had to remove it from American Amber Ale. You even can’t add a pretend flag. Want to put a flag of Cascadia on your bottle?? Nope, can’t do it. Consumers will think it is from another country, EVEN THOUGH, you are required to put “brewed and bottled by XYZ brewery at ABC, Oregon.” Just saying.  And don’t even think about putting Santa Claus or other cartoon type images on the bottle. That would make kids want to buy it. Just sayin. You also are barred from adding a real person, even if they are dead with out their or their estates consent. Remember Killer Kowalski of old-time wrasslin’ fame? Well, don’t call your Baltic Porter that if you plan to bottle it. Just sayin’. There are several more and they can be found on-line at the TTB website. Have some time on your hands? Feel free to give it a read. I’m starting to get a little riled up, so let’s move on. So.. if you or your artist know all the regulations (and you will after a few label rejections), you are all set, right? Well, maybe. In the event your beer has anything in it BESIDES Malt, Water, Hops and Yeast, you have to fill out a Statement of Process (SOP). This, however, is a snail mail thing for both the original documentation and all your corrections. This could add a month or more to your beer release. For instance, a certain Eugene brewery has a summer seasonal with Northwest honey added. This beer needs an SOP first, and then the label needs approved. If you forget to get the SOP in early, you may not be able to get your beer out to the thirsty public until June 1st. ( I refuse to let you know who this fictitious example might be patterned after).
Now, one of the main reasons this hurdle is here, is because of our friends the flavored malt beverages (FMB) also known as malternatives.  If you have a beverage manufacturer who adds spirits to a malt beverage (yes, many of these are just light beers, filtered so tight the color is gone and then flavors and/or spirits are added in) and you want to be taxed as if it was a beer, the government has an issue with that. So, they look into all these things. Sadly, when a brewer throws 40 pounds of honey into a beer, they need to make sure you’re not “fortifying” things.  Even the fake fruit flavorings some people throw into wheat beers need to have an SOP (or shall I say “should” have an SOP-enforcement is a little behind regulation. Just sayin’.).  And  it’s not just ingredients, processes are also scrutinized as well. Want to age a beer in a bourbon or wine barrel? You’d better get an SOP. Whant to freeze your beer and make an Eisbock? Can’t. That would be removing water which is like distilling. And then when the formulation department (oh yes, this is a different department than the label approval department) clears you, you need to put a statement on the label that says something like “Ale with cherries” or “Barleywine-style ale aged on oak barrels”. Plus, your SOP approval has to be sent from YOU to the label approval department. I don’t think they have inter-office mail or something!  Confused yet?? Yeah, us too.  Now, a little plug for the TTB. They have been holding “training seminars” to teach people the ins and outs of navigating the process. I attended one in Illinois two years ago and it was very informative.  Just like Organic Certification organizations for instance, they WANT you to put out more (alcohol taxation brings in major $$), they just need each hoop jumped through, each i dotted and t crossed.

Step #6
So, you’ve come out of the Formulation department with an SOP and the Labeling department with a COLA and you need to get this beer out either PDQ or ASAP, or your boss is going to flip his lid.  So you send it to your graphic designer and the label printer. Oh yeah, you have to choose a printer and further choose paper stock, label shape, label winding position(it has to come off your labeler correctly), make sure the colors, bleeds, blends, plates, dies, blah, blah blah are all set how you want.  Thousands of dollars to a printer for a label that falls off, wrinkles, or is misaligned is a bad mistake.
Once you are on the printers calendar, they run them for you-as long as you told them how many. Buying in bulk obviously costs less, so think about how many you will sell. Year round? Seasonal? recurring seasonal? one-off?  How much $$ though?  Well that depends on number of plates, the type of printing and of course the quantity. You COULD be paying 4-6 cents per label, but that likely means you are a regional craft brewer and order A LOT. Likely though, you might be in the 9-10 cents per label.  But if you needed a one time label with a good amount of detail and a UV protective coating, you could be paying 70 cents a label for a run of 1000 (80-cases of 12/22oz roughly)-I’ve done that before, but you’re looking at a $15 dollar bottle, so those costs are transferred to the consumer in that example.  Bottom line, a lot of decisions are needed once you have a label approved. 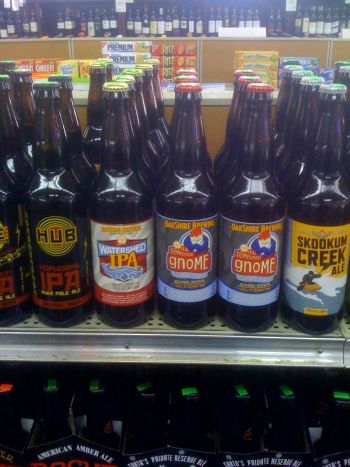 Step#7
Your printer met your deadline and they were delivered to your brewery via UPS, so now it’s time to bottle. You now have to get your beer you brewed ready for bottling on the right day, in the right brite tank with the proper carbonation and clarity. IF you are using mobile bottlers, like us, you have to coordinate that whole game.  If you have volunteers or just a packaging crew, you have to coordinate that. There’s more to do indeed. But now it is time to bottle that beer! Well folks, this is where I leave you as the explanation of getting carbonated and fragile beverages, where oxygen and light can ruin you,  into a 12 or 22 ounce warm glass bottle is a post in and of itself. Perhaps next time we’ll discuss the entire headache of bottling a beer. That may further answer the question of, “Hey, why doesn’t that brewery bottle their beer?”  Bottling….the worst thing you can do to your beer….. Peace out!