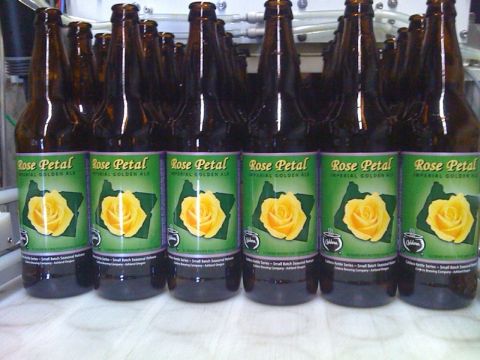 When Brewpublic celebrated our first year by throwing two big parties, we wanted to make certain that the beers being tapped were special. Naturally, we also wanted to go with one-offs and unique brews for our KillerBeerFest held at Bailey’s Taproom. Caldera Brewing of Ashland, one of our favorite breweries on the planet hooked us up with a keg of their Rose Petal Imperial Golden Ale. When we spoke with Caldera founder Jim Mills, he told us “I don’t know how it’s going to go over, but (the consumers) just want to try something new and crazy and different.” Well, it appears Mr. Mills was on to something. Since this statement in September of 2009, Caldera has not only increased the popularity of

there spectacular craft beers in a can (these regularly include their IPA, Pale Ale, and Ashland Amber so far), but they’ve initiated a special seasonal lineup of brews known as the Kettle Series. These 22-ounce bottles feature the likes of a refreshing Lawnmower Lager, spicy yet light Ginger Pale Ale, shockingly labeled, complex Vas Deferens, a lupulin smack in the face known as Hopportunity Knocks, and the gold medal winning Rauch Ur Bock.

Now, with the help of mobile bottlers Green Bottling, Caldera is soon to release the Rose Petal Imperial Golden Ale, proving that craft beer consumers are game for creative and imaginative styles. Made with 11 pounds of rose pedals and two liters of Bulgarian rose water, Mr. Mills says “this beers tastes like a party at Grandma’s house.” This smooth yet dangerously delicious beer should be available throughout the summer. Now you can make Caldera a part of your KillerBeerFest as you see fit. Prost!