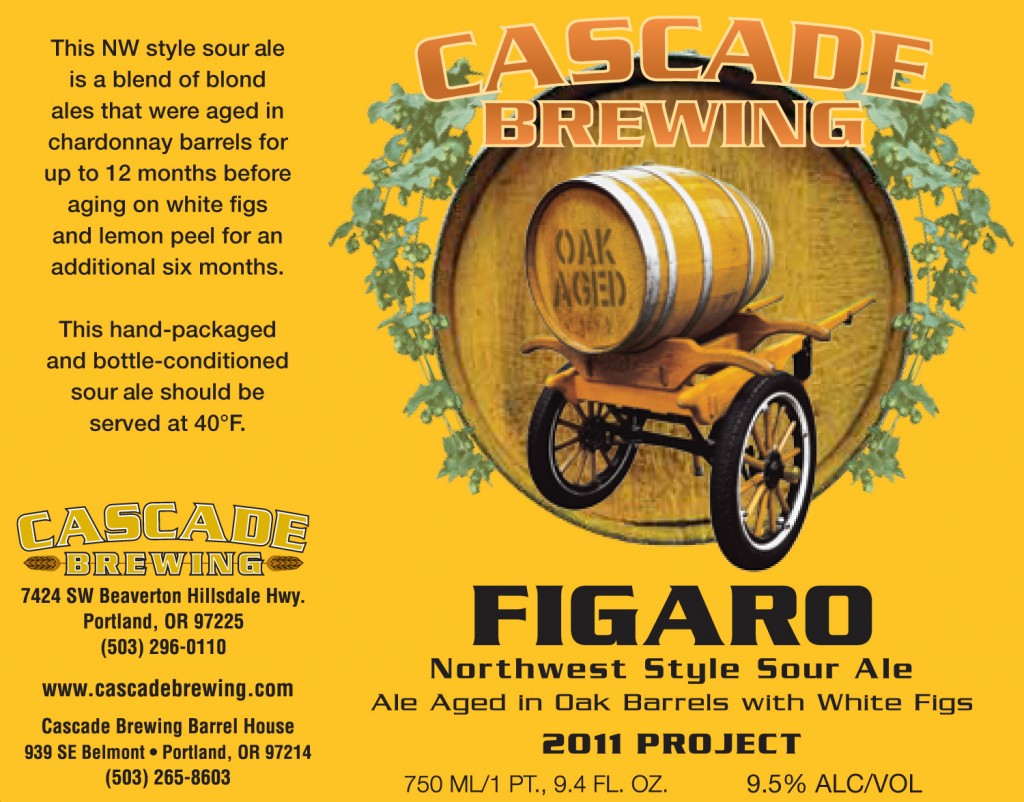 Cascade Brewing is at it again. Releasing another mouthwatering sour ale in super limited quantities. This time it’s Figaro, a Northwest-style sour strong blonde ale barrel aged in fresh Chardonnay barrels for three months then further aged with dried Adriatic white figs and Spanish lemon peel for an additional six month. You like? You want? Yes, so do we.

You can get your first taste of Figaro on Tuesday, August 14, 2012 at 6 p.m. when another weekly installment of Cascade Barrel House’s Tap It Tuesday ensues. According to a recent press release, this live from the barrel tapping features aromas of sweet malts, figs, golden raisins and citrus zest up front with hints of white wine grapes, lemon peel and sweet figs, leading to a crisp lemon sharpness in the finish with a lingering sweetness.
Prices: 9.5% ABV, $7.50 glass, $2.50 taster.

Here’s more on the release of the beer in bottles from the brewery:

And the next question is, obviously, “when will bottles be released?” The answer is… next week! Figaro was made in 2011 for the 5th anniversary of the City Beer Store, located in San Francisco. It’s been barrel aging since then, and trust us, it’s worth the wait! For those of you in Northern California, you will be able to purchase Figaro in bottles next Thursday, August 23 at City Beer Store, 1168 Folsom St, Ste 101, time TBA. For those who live in the Portland area, Figaro will be released at 5 pm on Friday, August 24 at the Cascade Brewing Barrel House and at the Raccoon Lodge. There is a limit of two bottles per person.

Figaro will only be available at the Barrel House, the Raccoon Lodge and City Beer Store in San Francisco. Sorry, but there will be NO online sales of this beer; the quantities are just too limited.