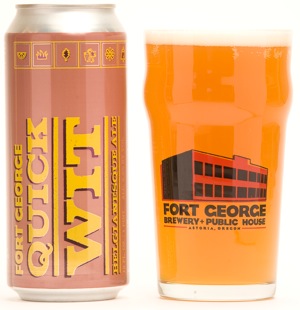 The brewers at Fort George have created a new canned beer called Quick Wit. It is a unique category of beer in the Northwest’s selection of packaged craft beer. The Belgian-style wit (white beer) is brewed with organic pale and wheat malts, coriander, organic lemongrass, and wild-crafted elderflower.

“It’s amazing summery ale—light, fluffy, floral—perfect for a warm day,” Fort George’s Chris Nemlowill said. Nemlowill recommends as you finish pouring the beer into a glass, to swirl it, incorporating the yeast that settles at the bottom of the can. The pale-colored beer packs a robust and cloudy body due to the heavy wheat content and it’s unfiltered.

The award-winning Portland design firm, Plazm, came up with the purple and yellow can that plays on the name, Quick Wit, by challenging your wit with puzzles and games. This brings the total lineup of Fort George brands in cans to five. It’s taken a year of canning to reach this point. Timed with summer, Fort George wanted to offer a wide selection of canned beers for campers, backpackers, hikers, and bikers. The cans are not only portable for the outdoors, but they also block light and oxygen from destroying beer, and the recycling rate is much higher for aluminum versus glass.

Right now the Fort George is working with distributors and retailers to carry all five brands, a wide spectrum of colors and flavors, including Quick Wit, 1811 Lager, Oatmeal Pale Ale, Vortex IPA, and Cavatica Stout. This Fort George Five lineup will be available on draught and in cans all summer, and then the brewery will determine whether to keep each beer as a year-round staple or a seasonal. Drinking beer is good for the economy, an idea Oregon Craft Beer month promotes each July. The more beer Fort George cans the more jobs are created. In five years, the business has grown from 6 to 50 employees. The Fort hopes to continue canning tried and true beers from their pub to complement the seasons, aiming for a special winter beer later in the year.