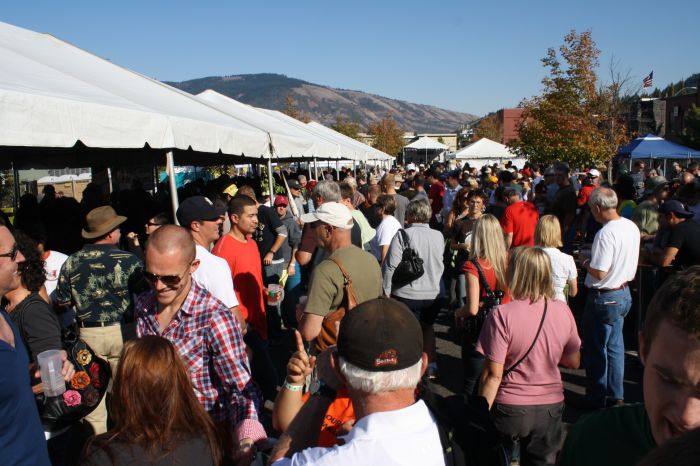 After a few years featuring some muculent, pluvial and literally wet hops fests, Hood River caught a break and was acquiesced a perfect early October day for soaking in the ever-anticipated lupulin harvest. Supplanting a notably cooler than usual summer, the region gave way to some magnificence in one of the most beautiful days of the year. And, on top of all this, the beers decidedly were choice.

We arrived at Hood River unrealistically hoping we would make both this might brew fest and that of Yakima (near where more than 3/4 of the nation’s hops grow and many breweries’ beer, unavailable in Oregon, pour). Upon arriving in the early afternoon to downtown Hood River, the backdrop of pastel colored hillsides across the expansive Columbia Gorge, highlighted by 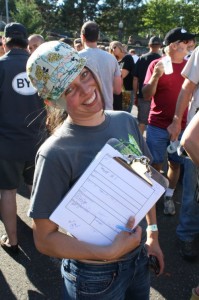 nearly cloudless blue skies, painted our day as welcomingly as possible. To top to this, the lively festival awaited in the partitioned parking lot space between 5th and 7th Streets and Cascade and Columbia Streets adjacent to the stalwart Full Sail Brewery & Taproom. Polka music emanated from the festival grounds as we approached and stepped into a line of people that extended southbound down the sidewalk more than a full block. The queue moved quickly and we found our way to the front where the typical ID check and wristband placement allowed us entry into a world on not just freshly hopped beer and music, but that of vendors and socially engaged community. After being given a mug and tokens by a kindly young lady named Tracy, we made a b-line for the back west side of the grounds to where the adults showing wristbands were allowed entry to the place we’d been anticipating all week. 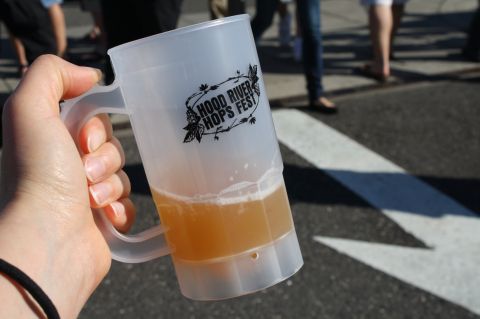 Beneath the first tent, it seemed fitting that the reverse alphabetized arrangement of the breweries led me first to Walking Man and their Hop-Along Fresh Hop IPA. We were really excited to try this beer since it was going to be one of the featured beers at this year’s KillerBeerFest. Brewers Jacob Leonard and Dan Munch really do a nice job accentuating the hops profile in beers and this orange-bodied India Pale was no exception. Leonard describes the beer as:

Hop-Along is a fresh hop IPA using Cascades from Roy Farms in Yakima. It’s ABV is 6.9% and we aren’t sure about the IBU but we are guessing around 60. It has a wonderful peachy aroma mixed with some pine and a nice chewy hop flavor. A light and crisp malt backbone let’s the hops be the showcase.

Spot on description and from talking to other beer geeks throughout the day, the Hop-Along was a strong contender for people’s choice, or buzz beer, of the event. 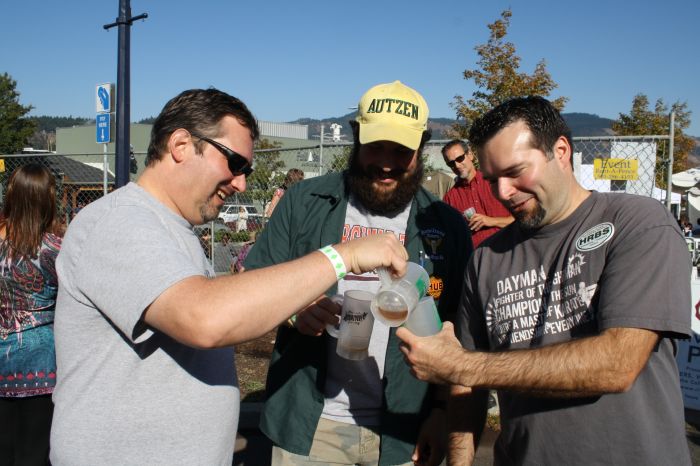 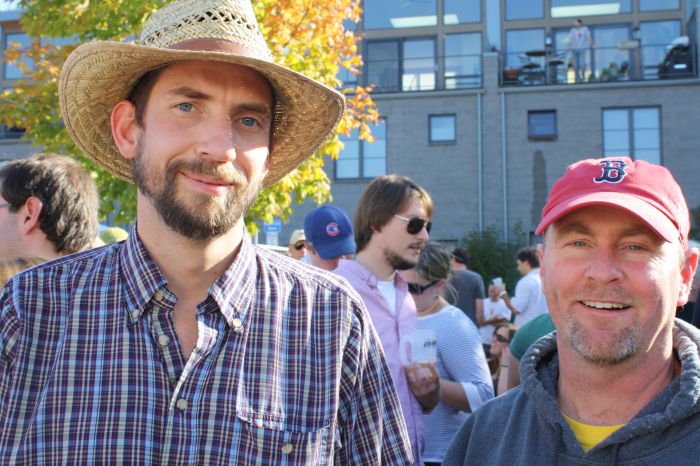 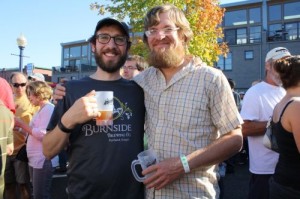 Other highlights of the day included hometown favorite Big Horse‘s highly respected Vernon the Rabbit Slayer Double IPA. This year’s high octane beast was utterly smooth to the palate for such a hopped-up and maltily emboldened brew. Fresh hopped with the relatively modern Simcoe hop from Yakima Valley in Washington, Vernon was preceded with long lines and easily lived up to the hype. Big Horse brewer Jason Kahler said of the beer:

This is the burliest batch of Vernon yet at 9.7% ABV, consume with caution as it drinks more like a 6% beer. It’s made with the freshest Simcoe hops from Carpenter Farms, this Double India Pale Ale has huge hop flavor and aroma all while being very balanced. Due to the popularity of this beer it will be rationed out (at the pub).

We witnessed a few of our dedicated beer loving friends  finishing their day off with a full four-token pour of Vernon for their final brew of the day. We, on the other hand, marched up the hill to the source at Horse Feathers pub and treated ourselves to full pints of the stuff before calling it a day. 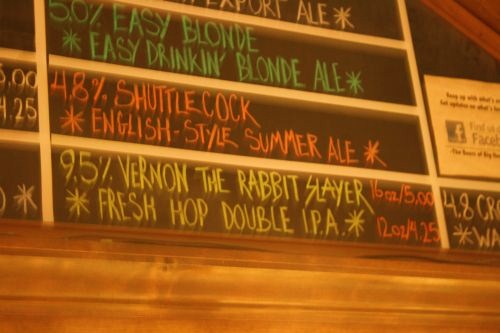 On these two beers, it appears John Foyston, writer for the Oregonian’s The Beer Here column agrees that these two were tops at the fest. All the beers that we tasted were quite good, and unfortunately we didn’t get to quaff them all. However, here’s a look at some other top hop picks from this year’s Hood River Hops Fest:

Ninkasi Total Crystalization: If not simply a winner for its great name, the beer was also a deep resinous golden-amber bodied rendition of the Eugene brewery’s beloved Total Domination IPA. Ninkasi‘s cult like following of hopheads is measured by beers such as this in which the focus is the fresh Crystal varietal added. 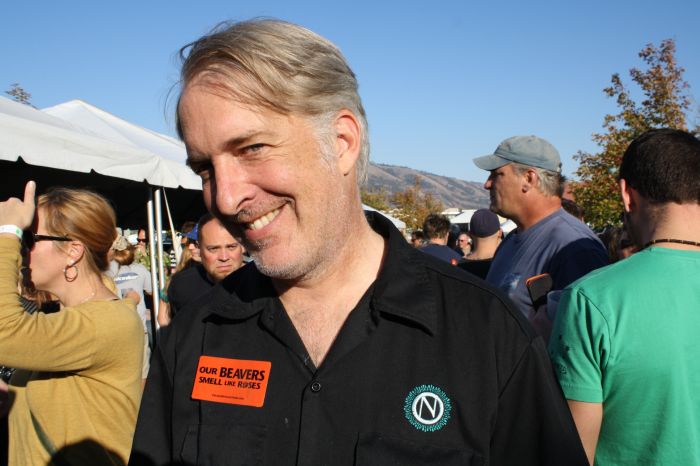 Double Mountain Killer Green: Is there something in the Hood River water that makes the breweries here put forth tremendously complex and flavorful hop-laden brew? It sure seems like it. Here’s another perennial fave or the heads. We’re delighted to know that the Double Mountaineers are saving a limited keg of this for our KillerBeerFest as well. Employing Brewer’s Gold hops from Sodbuster Farms in Hopmere, Oregon (same source as the delicious Full Sail Lupulin Fresh Hop Ale), Killer Green is justly named. Charlie Devereux of DM describes it best:

The base brew for Killer Green is a nice hefty IPA recipe, featuring a toffeeish malt character and enticingly earthy orange-hued color. The mouthfeel is rich and resinous, the flavors a complex mix of sweet, spicy, herbal and fruity; the finish is long and memorable, with a smooth yet powerful bitterness. In a word — Killer! 7.2% ABV, 83BU. 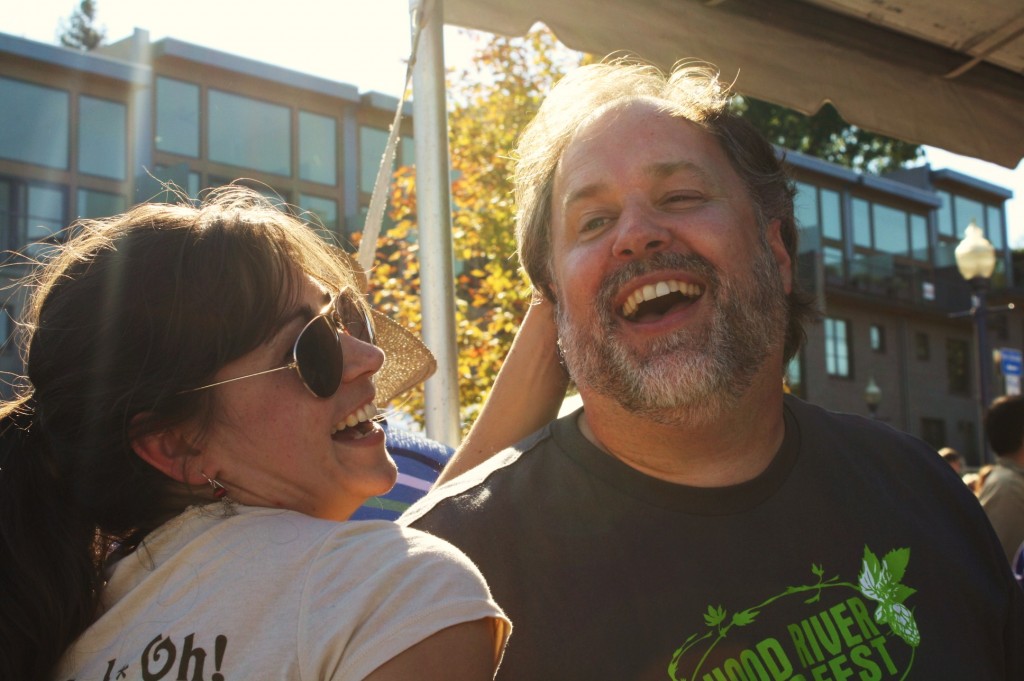 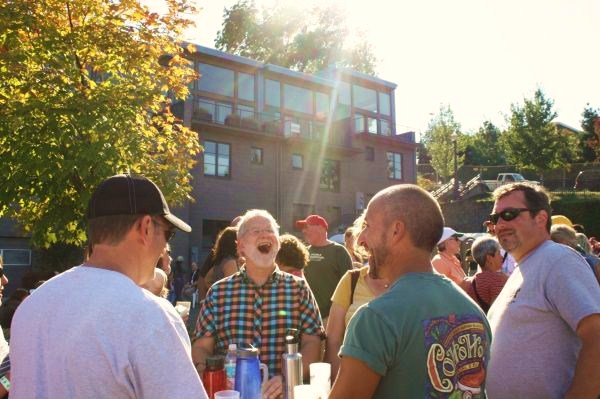 Laurelwood Hop Pickin’ Ale: This beer is the fresh hop beer we’d love on tap at our kegerator system at home. A breezy 4.9% ABV and spiced with fresh Cascades from Annen Brothers Farm in Mt Angel, Oregon, this was the last beer we tried at the fest, and so glad that was the case. There’s no question that Chad Kennedy and the Laurelwood brewers have really done some amazing things with hops over the past few years. This one was just a perfect pale ale for a perfect day, really.

We could have sated our fresh hop desires in Hood River without this wonderful fest (Full Sail, Double Mountain, and Big Horse were all among the best offered on this day), but the friendly faces, many of whom made the journey from Portland like us, and the spectacular weather, made it all more than just about the beer (though it was all about the beer).I think we’d be hard pressed to experience another fresh hop tastival this well organized and with such great weather. It was our favorite since the 2006 event at the NW Quimby Lucky Lab in Portland. Still, if you missed out, there’s more chances for you to taste many of these hoppilicious brews. 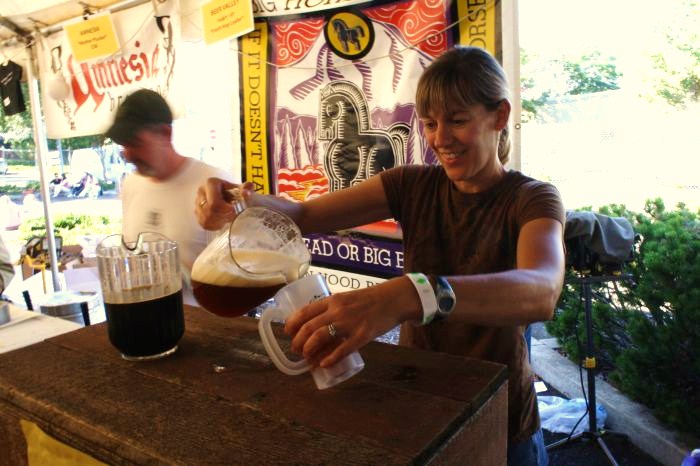 First off, we always recommend going to the source. Check out the brewpubs like Hopworks, Rock Bottom, BridgePort, Deschutes, Amnesia, Everybody’s Brewing, etc to get what’s left of their fresh hop offerings first hand.

Portland Fresh Hops Tastival. Portland’s biggest fresh hops extravaganza will once again be held at Oaks Amusement Park in Sellwood. You will find many of the same beers offered at the Hood River fest here. The Portland tastival of fresh hops takes place on Saturday October 9, 2010 starting at noon. To purchase tickets, go here. There will also be a Fresh Hop Beer Tastival Preview Party at the same location on October 8 from 5:30-8:30PM. Tickets, wristbands and glasses from this night can be used at the Saturday event.

Eugene Fresh Hop Tastival. Lane Events Center Auditorium will be the host of this year’s Eugene celebration of fresh hops. It’s all happening on Saturday October 16, 2010Noon-9PM. It’s your once-a-year chance to taste what Oregon’s finest brewmasters can do with just-picked hops. Sample more than 20-40 fresh hop beers from Oregon’s top craft brewers, and regional favorites like Oakshire, Ninkasi, Steelhead, and more.For more information on this event and the Portland Fresh Hop Tastival, go to http://oregonbeer.org/fhbt2010/

Killer Green Release Party. Going down October 5, 2010 at the Bye and Bye (1011 NE Alberta, Portland 5:30-8PM). Charlie and the Double Mountain crew will be giving out swag prizes (including the highly coveted KG t-shirts) and pouring dankalicious fresh hopped IPA. For more on the Killer Green, check out Double Mountain’s blog post.