Hood River, OR – Brewers know the best way to celebrate is to brew a special beer, so to honor American Craft Beer Week (May 17 – 23), Full Sail will release a new beer in their Brewer’s Share line up. This special beer, “Vendell Veizen” is a Weizen Bock and was developed by Assistant Packaging Supervisor, Wendell Bryant.

“It’s such an honor to brew a beer for American Craft Beer Week. I’m an avid home brewer and the best part about brewing is sharing what you’ve made with friends and family. I am excited to have a chance to brew one of my recipes on a larger scale because with more beer comes more friends to share it with. I enjoy German style biers, am a big bock fan and like malty beers, so I decided to make a Weizen Bock. Vendell Veizen is a bock style wheat bier, that is reddish amber in color and has tropical fruit flavors with a slight malt sweetness. It’s got a good amount of body and flavor,” said Bryant. ABV 7.2% IBU 21 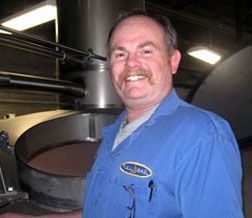 Full Sail has scheduled two “Meet the Brewer and the Beer” events to showcase this new beer. The first is at Full Sail at Riverplace in Portland, Monday, May 17th from 5:00 – 6:30PM and the second is at the Full Sail Tasting Room and Pub in Hood River, on Thursday, May 20th from 5:00 to 6:30PM. Join the Full Sail crew to celebrate American Craft Beer Week and toast a pint of this new brew with Wendell.

“Small brewers are small businesses and collectively we have provided so much to our local communities and have reshaped American beer culture that in 2006 congress ratified House Resolution 753 acknowledging our contributions. At Full Sail, our employee ownership has created a powerful set of stakeholders in our community. Because we employees share equity in the company we have a great sense of roots to where we live and work. We have a deep sense of responsibility to the beauty of the place and operate our brewery in a careful, sustainable way. We support hundreds of events and charities each year, with a focus on those in our local area. We understand the impact that a business can have in a smaller community and we strive to support local businesses, provide jobs with full benefits and support our employees who volunteer. There seems to be a great synergy between beer and raising money for good causes and we are very happy to be a part of that. Thank you for supporting American craft brewers and cheers to House Resolution 753,” added Irene Firmat, Full Sail’s Founder and CEO.