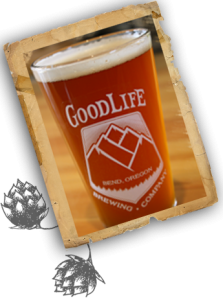 BEND, OR – Eighteen months after first mixing water, malt, and hops, GoodLife Brewing Company is increasing capacity by over 60% with the addition of new 30 BBL and 120 BBL fermenters.

The new fermentation tanks increase GoodLife’s monthly capacity from 480 barrels to 780 barrels, making their annual capacity 9,360 barrels.  Head Brewer, Curt Plants, said, “Exciting things are happening around here.  The new 120 BBL will be great for increasing our capacity, but I’m really excited about the new 30 BBL.  That tank will give us the freedom to brew new single batch beers as well as a few we have already done.”

GoodLife Brewing will now be able to increase the production of 22oz bottles of Descender IPA and Mountain Rescue Dry Hop Pale Ale.  Plants said, “We have seen such a high demand the last few months that we are increasing our packaging from 1,440 cases a month to 2,880 cases.”

There is still more room to expand in our facility and GoodLife is looking forward to a productive 2013.

As brewers of hand crafted ales, we are outdoor enthusiasts who look forward to sharing our craft beers that are most balanced and of the highest quality. GoodLife Brewing Company has been making award-winning beers for 18 months in its home of Bend, Oregon. GoodLife’s adventurous ales are Descender IPA, Mountain Rescue Dry Hop Pale Ale, Sweet As Pacific Ale and a selection of seasonal beers. In addition to making beer, GoodLife enjoys giving back to the community by supporting many local and national non-profit organizations. Play hard, live easy and enjoy GoodBeer for GoodLife! For more information, visit www.goodlifebrewing.com, or find us on Facebook and Twitter.