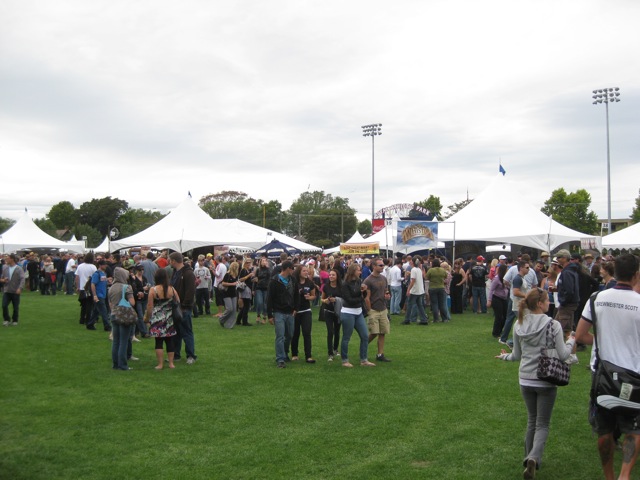 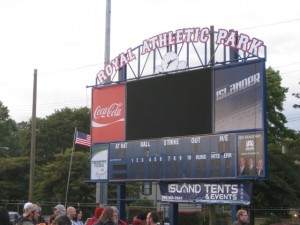 This past weekend’s plans took me to Victoria, British Columbia to take in the 18th Annual Great Canadian Beer Festival. This two-day festival is held each year at the Royal Athletic Field on the northern edge of downtown Victoria. This large sports complex gives ample space for the 7,000 plus attendees and 57 breweries representing over 180 beers from across Canada, Pacific Northwestern United States and Belgium. The Friday session ran from 3-8pm with an entrance fee of $30 and Saturday’s session was from Noon-6pm with a $35 fee. This fee is on top of drink tokens that cost another $1.25 each for on 4-ounce pour. Much different than how the Great American Beer Festival operates each year with their all inclusive ticket pricing. And from what I learned is that this year’s event sold out in record time, within eight minutes for the Saturday session and it only took three hours to sell out the Friday session. These Canucks like their beer! 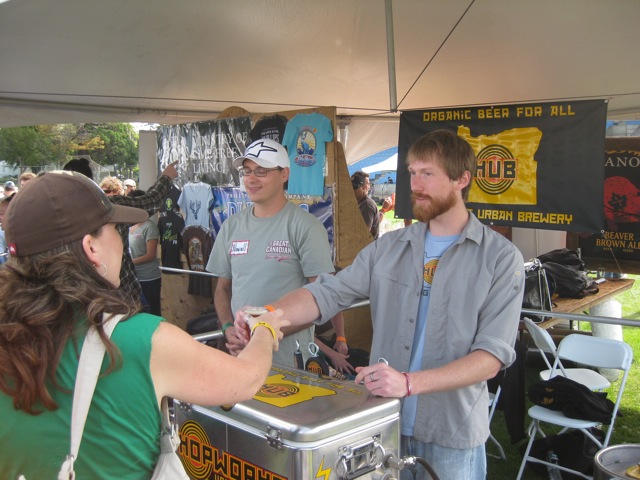 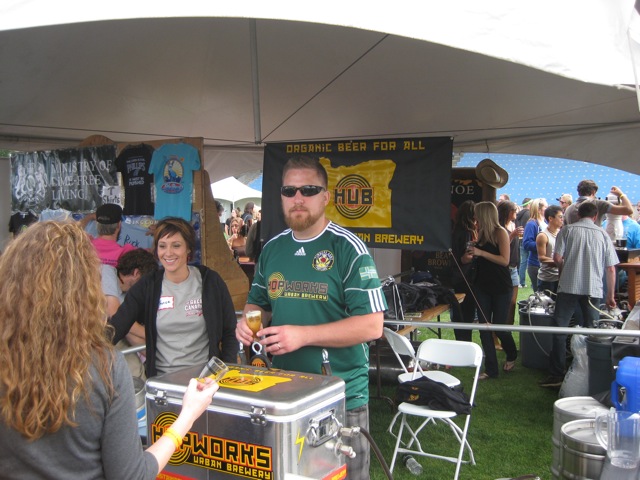 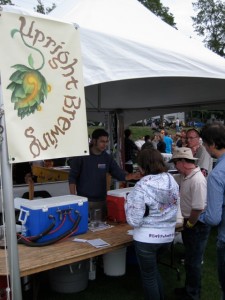 For those that have attended the Great American Beer Festival in Denver, this festival is similar in name only.  At the GABF, only beers produced here in the States are available. However the GCBF pours beer from across Canada but of those most are predominately from British Columbia, beers from the U.S. and a few bottle offerings from Belgium. It seems as if they the organizers took hold of the name and hoped for a more broader Canadian beer selection. Of the breweries from the Pacific Northwest in the United States, Oregon had five breweries represented including Hopworks Urban Brewery (with whom I helped out pouring beer for), Upright Brewing, Double Mountain Brewery, Rogue and Deschutes. 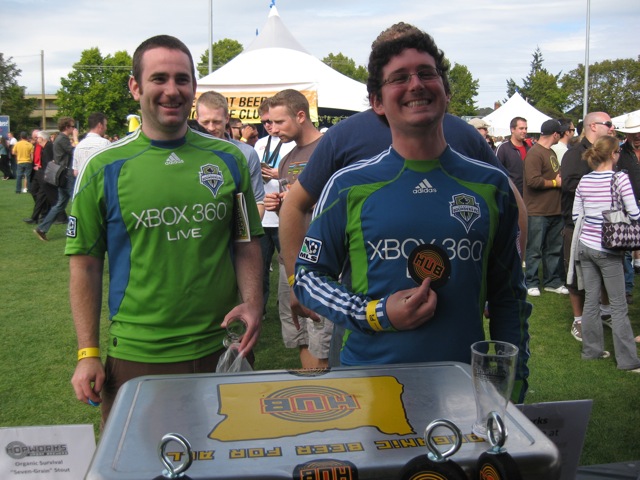 I arrived into Victoria via the Victoria Express passenger ferry from Port Angeles, WA. This ferry gets you across the Straight of Juan de Fuca in 55 minutes, 35 minutes faster than the better-known M.V. Coho Auto Ferry and is also a bit less expensive.  The ferry even slowed down so we could take in the views of two humped back whales swimming near us. From the ferry I cleared customs and preceded to take the 2.5km trek to the fest.

Upon entering the fest I received my 4-ounce Tasting Glass and GCBF Program that I flipped through to find out which beers looked intriguing to sample. They also throw in a free BC Transit ticket to get you back home safely. Fortunately for me I was assisting in pouring at the event so I was taken care of on my admission and tokens. (Thanks, Ben!) The layout of this festival had a very relaxed feel to it, probably most similar to the North American Organic Brewers Festival. There were 14 smaller sized tents that hosted four brewers each all spread out nicely over the entire baseball and soccer field. Then there were two larger tents that housed tables and chairs for patrons to relax or take cover if bad weather hit. Fortunately we had decent weather for both days, a bit cool on Friday but still manageable. Thankfully the rain held off until the end of the fest when we were loading up. 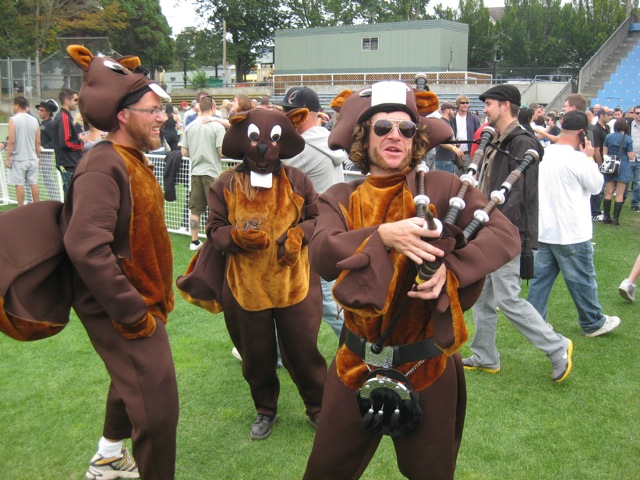 To feed the beer drinkers hunger there were five food vendors operating during festival hours. There were many tables available to sit down at and enjoy your beer tastings while grabbing a bite to eat. Also roaming throughout the grounds there were many carnival or circus type acts. This included a mermaid attempting to play an accordion, jugglers, marching band, and beaver costumed bagpipe players to make it a more festive atmosphere.

Now on to some of the beers that were sampled over the course of those two days: a few were exceptional, some mediocre and a few that were not so desirable. One B.C. brewery that turned out some fabulous tasting beers is Central City Brewing Co. from Surrey, BC. Earlier this year they won a Silver Medal for their Barley Wine Style Ale. Unfortunately for us drinkers this one was not available at the fest. However, their superb Red Racer Imperial IPA was there on cask clocking in at 9% ABV. Wow this was a big beer and solid at that. There was a strong hop presence in this over the top brew. I also sampled their Red Racer Belgian Tripel and this one was tasty as well with a strong but inviting dry finish. Another brewery offering some tasty brews was Driftwood Brewery from Victoria, BC with their Old Cellar Dweller 2009 on cask. This beer was only available on Friday and it was a mouth warmer for sure. 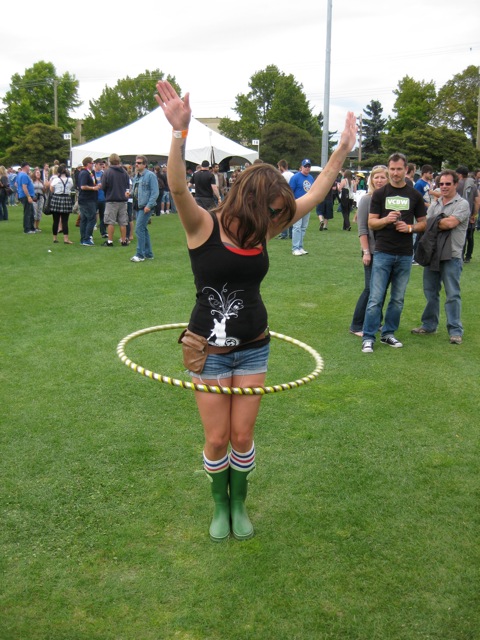 With the good comes the bad and over the course of the weekend I tasted some questionable B.C. beers. Unfortunately there were a handful of beers offering up off flavors such as diacetyl in their brews. I tasted a few back to back where I began to wonder if this is a preferred flavor profile in B.C. Some of these were newer breweries so hopefully with more brews under their belts they learn to correct this problem.

One of my personal delights of the festival was that Brooklyn Brewery was represented, the only U.S. brewery that was not from the Pacific Coast. I finally was able to try their Pennant Ale ‘55 that is a nice well-balanced pale ale that had a nice malt character to it. And to top it off they were pouring their Black Chocolate Stout, why oh why does Brooklyn not ship here to Oregon? This is such a great desert beer. This beer offers strong chocolate overtones that balance well with its heavily roasted malts to offer one bold, memorable taste. 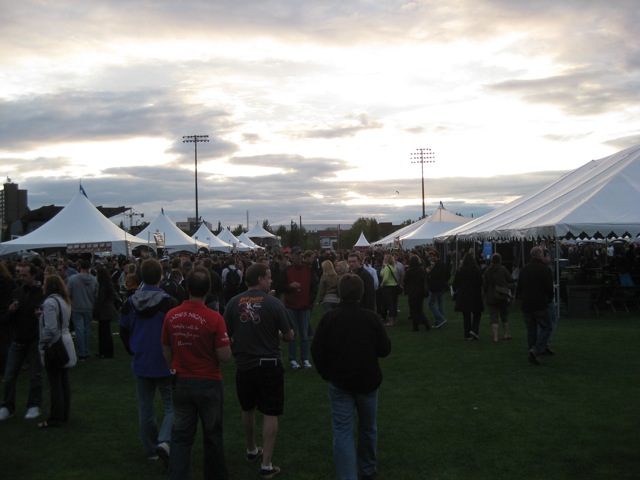 Overall the Great Canadian Beer Festival is one that any beer aficionado should attend at least one time in their life. This festival offers American beer drinkers’ beers not normally available here in the States and a decent amount of cask conditioned beers. Victoria is a nice city worth the visit with its strong British heritage and architecture. The GCBF always takes place the weekend after Labor Day in September each year. 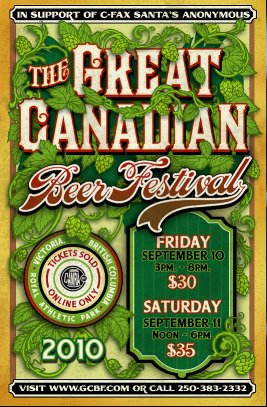