Portland, Oregon is unquestionably a top destination for foodies and beer enthusiasts. A short stroll down any main street in town reveals an assortment of ever emerging flavorsome landing places. In line with our city’s passion for artisan food and beverage comes a world of specialty products that cater to tastes of all sorts. Vegetarian and gluten-free products are more readily available to people in this region than in most others across the country. Many restaurants and grocery markets denote gluten-free products, and even a few breweries produce adjunct beers free of malted barley, rye, or wheat, a source of gluten. Gluten is a protein avoided by those with celiac disease, the related condition dermatitis herpetiformis,wheat allergies, or people who simply choose to abstain from it due to health and dietary reasons. Folks seeking out an alternate gluten-free beverage often resort to cider, saké, mead, various liquors, and gluten-free beer. Gluten-free beer often employs the use of sorghum and buckwheat as a replacement for barley, wheat, and rye. These beers are still considered to be greatly a niche market making it difficult for those in avoidance of non-gluten laden beer to find much variety. However, a new Southeast Portland brewery, Harvester Brewing (715 SE Lincoln St.), has dedicated themselves to putting forth exclusively gluten-free brews. Brewers James Neumeister and John Dugan recently bottled up their first batch Harvester Pale Ale for the public and to the delight of a gluten-free 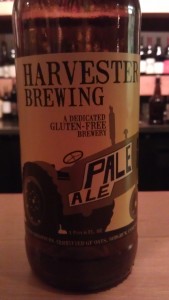 audience. Neumeister informs us that this innovative new brand “is handcrafted from chestnuts, sorghum, oats, and pure cane sugar, and generously hopped with Nugget, Cascade, and Meridian”, adding “The chestnuts are sourced directly from an Oregon farmer and hand-roasted at the brewery. The certified gluten-free oats come from a Montana company that grows them in an area isolated from gluten-containing grains. With its true craft beer flavor this 6.8% ABV brew has been highly anticipated by those whose diets are gluten-free.”

Available in 22-ounce bottles, Harvester Pale Ale is now on the shelf at Belmont Station (4500 SE Stark St.). Look for various other specialty shops to carry their brew as productivity increases.

“As capacity increases we expect distribution of Harvester beers to many more beer specialty stores and natural food supermarkets” says Neumeister. “We are excited to finally share the first craft beer created in our dedicated gluten-free facility. In the next year we will be adding more styles to our regular line-up.”

Read our original post about Harvest Brewing from November 2009.