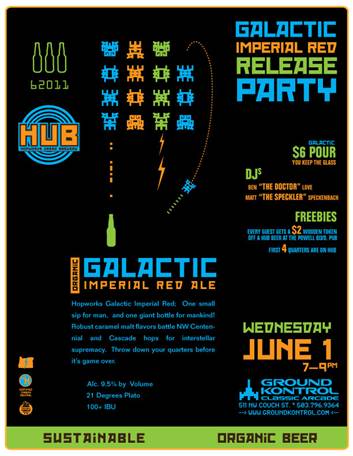 Hopworks Urban Brewery is pleased to announce the return of a seasonal favorite. Welcome back HUB’s Galactic Imperial Red Ale on June 1st, 2011, now available for the first time in 22-ounce bottles.

The brewery will celebrate the release of this big hoppy bold brew with a special throw down at Ground Kontrol, a classic video arcade and bar at the corner of NW 5th and Couch in downtown Portland, Oregon.

Join the brew crew from HUB in a special evening that includes live music spun by their brewer deejays Ben “The Doctor” Love and Matt “The Speckler” Speckenbach.