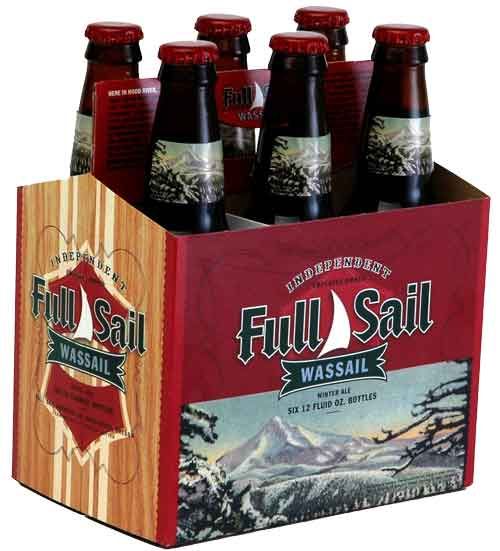 In Hood River, every year a few undeniable signs signal when winter is at the doorstep. The cool east winds begin to blow, Mt. Hood and Mt. Adams get a white blanket of fresh powder, and the snow report for the backcountry regains its trance-like hold. But most of all, we know it’s winter because the Wassail starts flowing once again.

“Brewing Wassail is an annual tradition here at Full Sail. We have brewed Wassail every holiday season since 1988 and it’s now as much a part of the festivities as sharing a roaring fire with our closest family and friends. It’s no wonder this multi-medal winner is one of our favorite beers to brew. Choosing our ingredients for Wassail is like taking time to choose the perfect gift. Each year we carefully select the best hops and malts to brew this special beer. This year’s Wassail is brewed with a range of caramel malts and dark chocolate malts giving it a deep mahogany color and a full malty body. We used a blend of Pacific Northwest hops for a pleasant hoppy aroma and finish creating a deliciously balanced beer that appeals to both hop and malt lovers alike. It’s like our own little Christmas miracle,” said Jamie Emmerson, Full Sail’s Executive Brewmaster.

The Wassail packaging features a vintage postcard of the scenic Hood River Valley dusted with snow. In the spirit of tradition, a snow-covered douglas-fir tree looms in the foreground and Mt. Hood rises majestically in the background. Wassail makes the ideal gift for the beer enthusiasts in your life, and is the perfect accompaniment to the desserts and flavorful dishes that the holidays bring. Look for Wassail six packs at your favorite store, or on draught at your local restaurant or pub. Wassail will be widely available October through December. ABV 7% IBU 56.