As you are probably aware (seeing as how you’re a beer geek reading this), there’s a lot going on craft beer-wise in Cascadia during the month of March. Really, there’s always a lot going on here. It seems the fun never ends. Here’s three can’t miss events that we recommend you attend for the love of great beer.

One of Hood River’s top three best breweries, Double Mountain, has been turning heads and captivating palates big time. Now just three years deep in the game, they’re throwing a blow out not to be skipped. Starting at noon on Saturday March 13 and lasting until 11PM, there will be lots of great DM beer, an array of great live music, and delicious food. All this under a heated tent outside of the brewpub. Read more at our earlier post here. We’ll see you there!

Another spectacular Oregon brewery, Fort George of Astoria, celebrated their third anno the very same weekend. Much like the Double Mountain blast, there will be great food, great music, and yes, great beer. Special musical guests Ma Barley will be performing later on in the evening and will have a special Fort George Jingle to share with the crowd. All of this while Fort George begins to beef-up their production with a newly acquired 30-barrel brewhouse. Check out more on this celebration at the Fort on their blog. 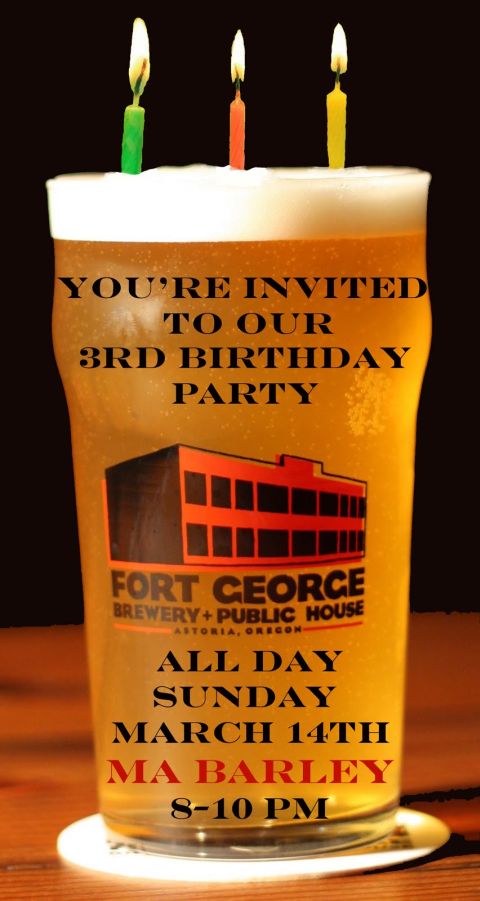 Okay, so we are tooting our own horn, but this event is really about the art of beer and the artists who brew them. Eight breweries will be providing beers and brewers for this one-of-a-kind event taking place at four of Division Street (Portland)’s finest craft beer pubs. From noon til 6PM (possibly later) eight all-star breweries including Fort George, Double Mountain, Hopworks, Beer Valley, Walking Man, Barley Brown’s, Full Sail, and New Old Lompoc will rock Division Street in SE Portland. For more information, visit out events page.