Lots of action going on in the local beer bottling scene. In case you haven’t noticed, Hopworks Urban Brewery has been selling select bombers (that’s 22-ouncers for those of who haven’t heard) of their IPA, Seven Grain Stout, DOA, and Crosstown Pale Ale. The brightly colored orange, yellow, and red bottles are hard to miss on the shelves of select craft beer dispensaries. On Monday night, Hopwork brewers were on hand at Belmont Station for a meet the brewer event to kickoff these snazzy/gaudy new eye catchers. Brewers Christian Ettinger and Ben Love served up tastes of their bottled beauts on draft as well as their Bourbon Barrel Aged Noggin’ Floggin’ Barleywine and a Cask Conditioned IPA. 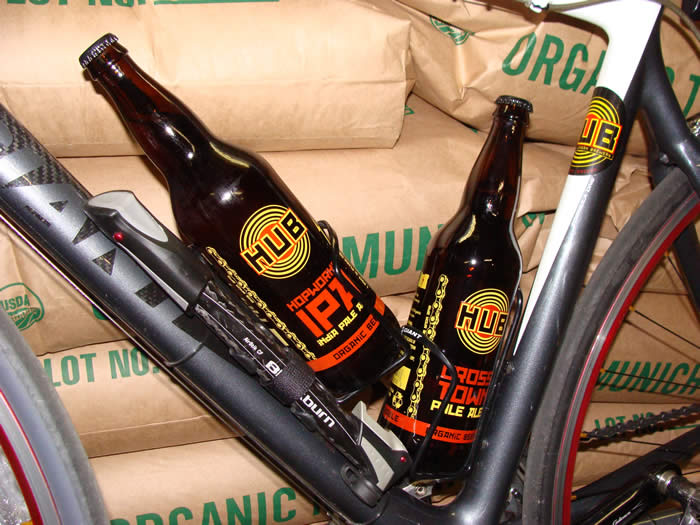 Mike Weksler of Green Bottling sent us some pictures of the latest mobile bottling project at Bend’s Silver Moon Brewing. Green Dragon co-founder and masterbrewer Lolo Lancaster was on hand alongside the Moon’s head brewer Tyler Reichert to bottle up more of their Hop KNOB IPA in addition to a seasonal High Plains Heffe. Look for the crisp Bavarian-style wheat beer in stores this week. 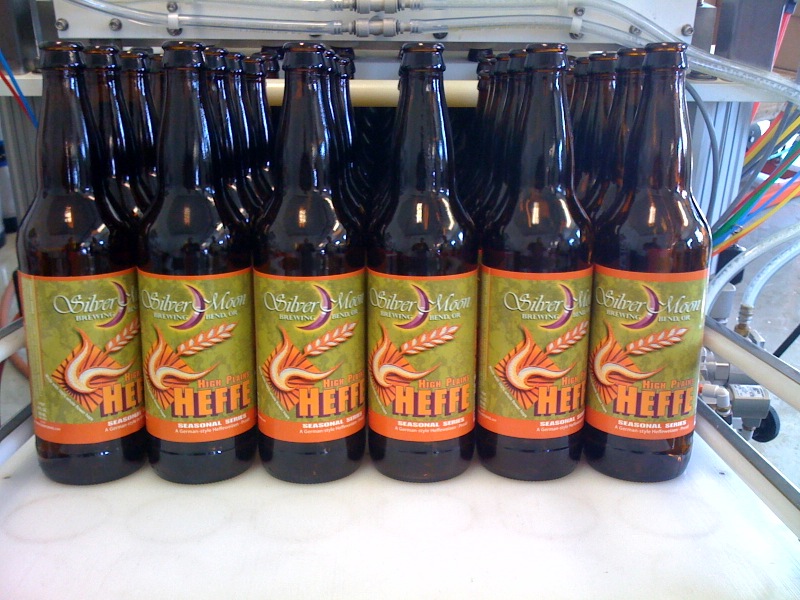 Green Bottling is also pleased to be the bottlers who put Bend Brewing’s Elk Lake IPA. Here’s what a press release from Bend says:

For the first time ever, lovers of Bend Brewing Co.’s Elk Lake IPA can take 22 ounce bottles of the extremely popular ale home.
The inaugural run of IPA in bottles will sell for only $5 per bottle and will be available only at the Bend Brewing Co. brewpub beginning May 28. First come, first served! Don’t miss the opportunity to send a bottle back home for Father’s Day, stash it in your cooler for a summer camping trip, or stockpile for the long winter to follow.
Elk Lake IPA is a true Northwest-style IPA. Its exceptional aroma is reminiscent of citrus and pine balanced with a distinct underlying bitterness. Specifications: IBUs 64 and ABV 6.15%.

Full Sail LTD 03 is released ifrom the Hood.  Hood River, that is. The season lager series will feature what the company says the Pilsner-style beer is “pale golden in color, features a spicy floral hop aroma, a malty medium body, and a smooth thirst-quenching finish.”  A press release from Full Sail’s Sandra Evens adds:

LTD 03 registers “Pale” on the “Malt-O-Meter” that is featured on the six packs. Beer aficionados, or t

he aspiring ones, will enjoy the bottom of the six-pack that features an easy-to-read chart of “Today’s Recipe,” including Sterling hops, 2 row pale malt, plato (14 degrees), I.B.U. (35), alcohol by volume (5.6) and any special ingredients. LTD 03 will be available in six-packs and draught and will be available June through September.

LTD 03 has just been bottled and will be out on shelves throughout the Pacific Northwest this month.

The weather outside is delightful and the Deschutes has just put their Twilight Ale to bottles for summer sessioning. The straw-colored light ale (5.0% ABV) with a nicely lil punch of hops aroma from the addition of whole flower Cascade, Amarillo and Tettnangs (35 I.B.U.) hit shelves on Memorial Day.

Deschutes brewer John Abraham has many beers and of this one he says, “The malts of Twilight Ale are at once offset and complemented by citrus and floral aromas that come from the whole flower hops. The overall result is a crisp, effervescent, highly drinkable ale. I consider it the perfect hot weather quencher.”

Suggested food pairings: The brewery team recommends pairing Twilight with picnic classics such as barbecued ribs, and salads with lemon and dill.

Have a new beer coming out and want us to try it?  Send a bottle, six pack, or case (this is preferred) to us today!