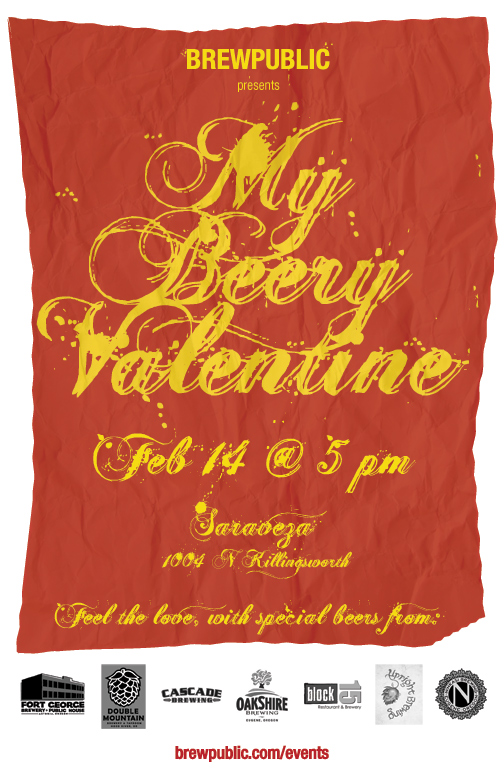 Celebrate Valentines Day with Decadent and Delectable Beer at Saraveza.

Brewpublic’s 2nd Annual My Beery Valentine offers a variety of unique, specialty, and one-off craft beers with sweethearts and sweettooths in mind. Many of these distinct brews feature fruit and/or chocolate.

Pouring on this night:

* Alameda My Bloody Valentine: Here is a deep red-hued Blood Orange Saison. This dry, citric, tart, and spritzy farmhouse ale is incredibly drinkable at 5.5% ABV. The orange aroma and a little of the flavor comes from the use of dried orange peels in the kettle, followed later by the addition of hand squeezed blood orange juice to the finished beer. Saaz hops complement the peppery aromatics from the saison yeast and the citrus flavor adding yet another dimension to an already interesting beer.

* Block 15 Love Potion #9: Brewed special for this occasion by the Corvallis brewers at Block 15. “A hint of earthiness just ahead of a hearty fruit flavor somewhere between … wait for it … blackberry & red raspberry. Nice roasty support & not too sweet” -Dave Selden 33Beers.com

* Cascade Chocolate Raspberry: Using the last keg of the past fall’s Fresh Hop Porter and a new version of Busta Nut Brown, the brewers and blenders at Cascade added some raspberry infused triple and straight Bourbonic. You will get raspberries and chocolate in the nose, and bitter chocolate, tart fruit and dark spices on the tongue. The Bourbonic finishes it up in a way that only Bourbonic can. 8% ABV.

* Double Mountain Bonne Idée Avec Kriek: This beer is one you may never be able to try again. This complex brew combines the regular Bonne Idee, developed originally for 2009?s Portland’s Cheers To Belgian Beers, blended 85/15 with Devil’s Kriek 2010, brewed over the summer. With cherries grown at Brewmaster Matt Swihart’s orchard in Hood River and the addition of Brettanomyces, the result is tart, sweet, and ever-changing specimen.

* Fort George Bourbon BBL Cavatica: “Our Cavatica Stout was left to sit and age in Wild Turkey barrels for two and a half months. The day before we transferred the stout into a serving tank we had one of the Wild Turkey barrels explode on us sending delicious stout all down Duane St. It never smelled so good on this block. What was once a very delicious bourbon stout has become a limited edition bourbon stout.” -Chris Nemlowill, co-founder of Fort George Brewery.

* Fort George Murky Pearl Oyster Stout: Many believe that oysters are an aphrodisiac.This brewed with three buckets Willapa Bay oysters run through wort. Then the brewers let the oysters sit in the wort until they popped open infusing the beer with the briny oyster juice. Although you cannot taste an immense amount of oyster in this stout, you can taste a hint of salty goodness that lingers in this beer. Chris say “Drinking this beer is truly like kissing the ocean.”

* Ninkasi Vanilla Oatis: A vanilla infused version of Ninkasi’s beloved Oatmeal Stout. “It is a pure confection, with the vanilla unexpectedly drawing out a long, intense chocolate note…tastes like a float, and I kept expecting to see a dollop of vanilla ice cream float up. The whole experience is accentuated by the creaminess of the stout, which is like silk.” -Jeff Alworth, Beervana Blog.

* Upright Blend Love: “A combination of the upcoming second batch of Four Play, the brewery’s annual sour cherry wheat beer with some barrel-aged Six using raspberry puree, yielding a complex and one of a kind fruit laden brew paying homage to one of our most beloved local brewers.” -Upright brewer/founder Alex Ganum

Saraveza will also feature special treats courtesy of Sugar Pimp to pair with these delicious brews.