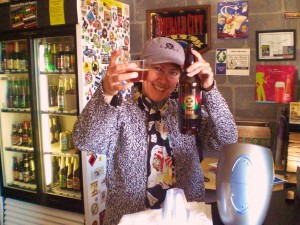 Be sure to mark your social calendars for some pretty cool events that By The Bottle has planned. Co-founder Arlene Nunez say “Each event promises to be a bountiful source of new beer flavors and provocative beer experiences. From an introductory home-brewing class, for ladies only, to sour ales, new beer explorations await you.”

A free “Cool-laborative” Beer Tasting with Oakshire Brewing (Eugene, OR) & Cascade Brewing (Portland, OR) Come-mingle with Matt Van Wyk with Oakshire and Curtis Bain with Cascade at the same tasting! Matt is the Brewmaster for Oakshire, and Curtis is Cascade’s Master Educator on their signature Sour Ales. Both will be pouring your samples while discussing their beers. The samples they will be providing are free. Larger taster flights of four, for $5 will be available. Glasses/pints, depending on the beer, will be sold on draft.

Cascade Brewing The Vine: This Northwest Style Sour Ale is a blend of soured Triple, Blonde Quad and Golden ales that have been refermented with the fresh pressed juice of white wine grapes. The beer spent more than six months of lactic fermentation and aging in small oak barrels. 9.2% ABV

Cascade Brewing Sang Rouge: Previously called ‘Mouton Rouge’… Sang Rouge is aged up to 30 months in oak barrels. This American Wild Ale is a blend of as many as nine lots of aged reds, resulting in a very deep, rich and complex sour. 8% ABV

Description: Have a say-so with Dave Flemming, Brewmaster of Lompoc while he pours you FREE samples of some of his magnificent ales. Larger taster flights of four, for $5 will be available, and all of the Lompoc featured beers will be available by the glass or pint, depending on the beer. Dave says if you buy a pint of any of his beers, he’ll let you keep the Lompoc pint glass for FREE.

A new bottle release of Lompoc’s Baltic Porter coincides with this event. There will be special bottle pricing during the event only, when all four featured beers are purchased in bottles.

In Dave’s own words, he says he was made in Japan, but born in Washington DC. He’s been brewing professionally for 14 years. For Lompoc, he’s been brewing for 1 year, 4 months, 17 days, 6 hours and 56 minutes, but who’s counting?

Description: Ladies wanted! Join Arlene at Bader Beer & Wine Supply for an all Fem-ALE entry-level beer making class designed to show the first time brewer the beer making process. A 5-gallon batch of beer will be made in the class. The discussion will include the use of specialty grains, hops, yeast, malt syrup, sanitation and fermentation. I hope they have some tasty homebrews for us to sample. We can’t be dry for three hours! I’ll work on it.

Have your friends meet you back in the Tap Room at By the Bottle. Your class fee includes a pint! (does not include a tip for the bartender)

Our friends at Bader were kind enough to do a special Saturday class on this day, but we will need twelve beer enthusiastic beer chicks for it to happen, so tell a girlfriend or two. Sorry, guys, we’ll do another one for you, next time.

Registration: Sign-up at By the Bottle, your fee will be required when you sign-up. I will take a phone call sign-up, but it will not reserve your space.

Class time: 1pm-4pm, then a pint afterward at BTB

Lots of other stuff is in the works…stay tuned, BEERDOS!