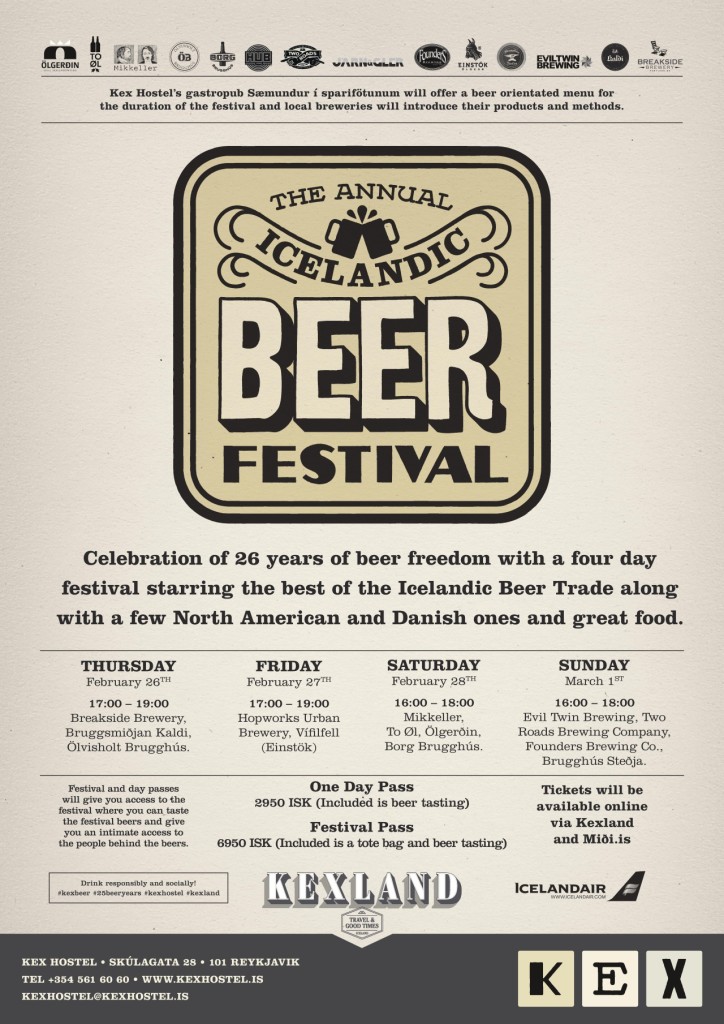 “Our focus has been on breweries from Oregon simply because we like the way people from Oregon think and how the craft beer movement has been developing in that particular state.” – Ólafur Ágústsson, restaurant manager at KEX

Portland, OR – Portland breweries are preparing to embark on an epic voyage to Reykjavik to spread the gospel of Oregon beer at the annual Icelandic Beer Festival, which will take place at KEX Hostel from Feb. 26 through March 1.

Breakside and Hopworks will showcase their beers as part of a contingent organized by Alex Briggs, who is part of a group working with Kurt Huffman of ChefStable to open The Loyal Legion, a new Portland beer hall that will soon offer 99 Oregon brews on tap in the old Portland Police Athletic Association building at Southeast Sixth Avenue and Alder Street.

It’s the fourth year KEX has hosted the Icelandic Beer Festival. While the lineup of U.S. breweries recently expanded to include beers from Connecticut (Two Roads) and Michigan (Founders), Oregon’s craft breweries have always been and will remain a focal point for the 2015 event.

“Our focus has been on breweries from Oregon simply because we like the way people from Oregon think and how the craft beer movement has been developing in that particular state,” said Ólafur Ágústsson, restaurant manager at KEX. “We feel that we can connect to people from Portland and all of Oregon. Reykjavik has a lot in common.”

The Icelandic Beer Festival celebrates March 1, 1989, the end of the prohibition on beer in the country.

“We feel like beer in Iceland needs its own festival so people can come together to celebrate this luxury beverage,” said Ágústsson, noting the festival not only celebrates beer but also offers a glimpse into the Icelandic music scene. “We want people to come and enjoy great beers, meet interesting people, eat good food and listen to music.”

Oregon’s breweries will be featured on Feb. 26 and 27 during the event.

Breakside will bring two beers to the festival: Breakside IPA and Salted Caramel Stout. Breakside IPA, a hoppy American-style IPA, is the company’s flagship beer and won the Gold Medal at last year’s Great American Beer Festival. Salted Caramel Stout is a seasonal brewed in collaboration with Salt & Straw Ice Cream in Portland and was named as one of Draft magazine’s Top 25 Beers of the Year in 2014.

“We think this is a fantastic opportunity to share some of our beers with a new audience, and we are excited to see what is happening in Iceland’s beer scene,” said Ben Edmunds, brewmaster at Breakside Brewery. “There is no doubt that some of the most innovative and fun beer in the world is coming out of Scandinavia right now, and this is a unique opportunity for us to see it firsthand and learn from our Icelandic counterparts.”

Hopworks will bring three beers to the event: Motherland Russian Imperial Stout, Rise Up IPA and Hopworks IPA. All three accentuate the Northwest flavor profile and predilection for hops and represent the company’s aim to champion organics and high-quality beer.

Hopworks’ Thomas Bleigh said he’d be interested to see how the Northwest beers are perceived in Iceland but also to learn more about the local beers in Reykjavik.

“Drinking for me is an extension of community and social interaction,” Bleigh said. “I’m looking forward to expanding the conversation with Iceland.”

Having an opportunity to see the northern lights at this time of year isn’t so bad either, he added: “I can’t wait to experience and see geothermal adventures and unusual landscapes.”

Other breweries participating in the Icelandic Beer Festival include three from Denmark: Mikkeller, To Öl and Evil Twin.

This year’s event comes around the same time Icelandair is scheduled to start offering direct flights from Portland to Reykjavik. Direct service is set to begin as soon as this spring.

For more information about KEX and its events, visit http://www.kexland.is.