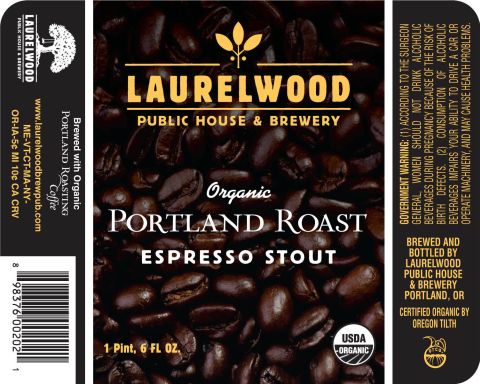 The brew is a collaboration between the brewery and Portland Roasting. It features a blend of Sumatran and Ethiopian coffees specially selected by Laurelwood head brewer Chad Kennedy. Laurelwood released a statement saying “These Organic and Farm Friendly Direct coffees blend nicely in our smooth and mellow Organic stout. This well-balanced creation has a nice coffee aroma and flavor that subtly compliments the roasted character of this dark ale.” 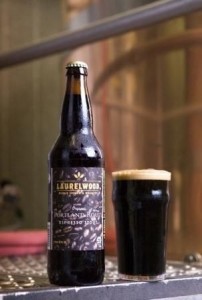 Sayeth Monsieur Kennedy: “On February 11th, we will be releasing Organic Portland Roast Espresso Stout in 22 oz bottles. This will be the second year we’ve brewed this beer and I thought I’d take a moment to share a little bit of the history of our Espresso Stout. We started brewing a coffee stout in 2005 using Stumptown Coffee. Then in 2007, our restaurants all switched to Portland Roasting coffee. I was impressed not only by the quality of their coffee but also their commitment to giving back to the communities where they source their coffee beans. I thought working with them on a new version of our coffee stout would be a great opportunity. I reached out to Mark Stell of Portland Roasting and asked them if they’d be interested in working together on the project.

In January of 2009, I met with Mark and the roasters and they walked me through a cupping of several of their roasts, trying to find a coffee that would work best in beer. After lots of sipping, sniffing and discussion, we decided that a blend would actually be best for the beer. We wanted to minimize bitterness, add depth of flavor to the stout and accentuate the already present coffee notes in the aroma. Their Organic Mocha Java blend achieved all this. Give the Organic Portland Roast Espresso Stout a taste and let me know what you think.“