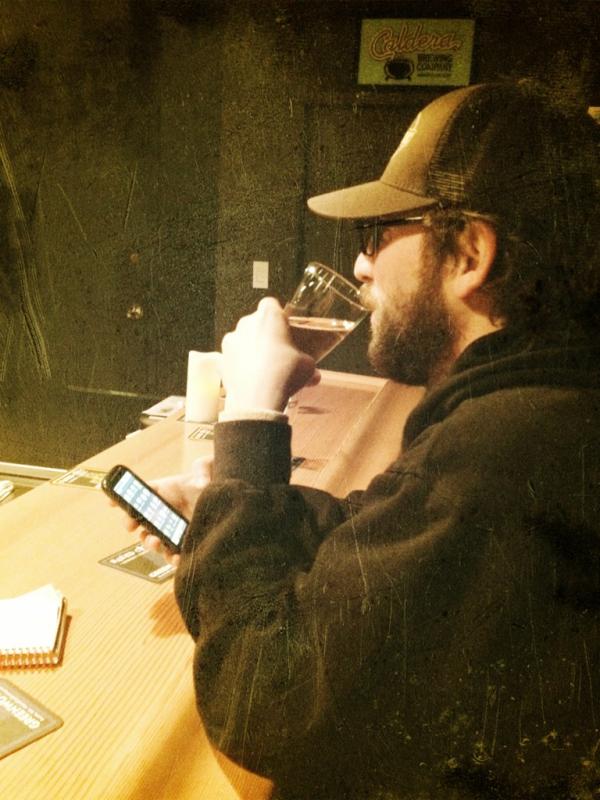 Over the past 14 years I have met so many wonderful people in and around Portland. These people have shaped my life in ways that I can’t even begin to explain. Many of these fabulous folks I have met through being a beer blogger and an advocate of craft brew. The talented souls who work in a myriad of capacities to grow the artisan beer segment of our top notch community here in the Pacific Northwest have served not only as tastemakers, but they’ve helped me to evolve and redefine much of who I am and what I see in the everchanging world around me.

I remember when my friend Alex Ganum who I used to work at Belmont Station with five years ago decided to open his own brewery featuring a French Farmhouse house yeast, there were many heads spinning. This was only a few years ago. Now when I look at Upright’s success and other friends who have followed in Alex’s footsteps like Mike Wright and Sean Burke at The Commons Brewery, and Dave Logsdon and Chuck Porter at Logsdon Organic Farmhouse Ales, it warms the cockles of my heart to know that here in Beervana, we have a real audience for pioneers of imagination. As further proof that these are not just local phenomenons, these three breweries all took home prestigious awards this month at the World Beer Cup in San Diego.

Folks like Ron Gansberg and the team of brewers at Cascade who, behind owner Art Larrance, took a big risk and opened a house of sour barrel-aged beers. When you look at craft beer on a national scope, it seems that all roads continually lead back to Portland. These days we’ve got a beer festival or three every single weekend. Festivals dedicated to sour, fruit, Belgian, Scottish, super hopped, strong, winter, session, and so many other beers. We’ve got new beer bloggers popping up on a weekly basis. We’ve got interest in a vast world of nuances that surround craft beer, wine, spirits, and all kinds of artforms here. The aforementioned artists and engineers are filling niches that seem unending. We’re seeing more organic beers like those that are the staple of the esteemed Hopworks Urban Brewery and Laurelwood Brewing. We’ re seeing more daring and adventurous breweries like Breakside Brewery creating some insanely imaginative food pairing. The list goes on and on. It’s even encouraging to see that large breweries like Widmer and Deschutes continuing to breakground a major expansion efforts, with the likes of Ninkasi, the fast growing brewery in our country’s history right there as well.

It’s an exciting world of craft beer with lots of changes happening, most which I see as beneficial. Bend, Oregon is a shining example of how a small mountain town can sustain so many breweries. With a population about the same size as Asheville, NC (who brags being Beer City USA on Dr. Papazian’s online Examiner polls), Bend, has more breweries, with more on the way.

And let’s not forget about Pelican Brewery in Pacific City, Oregon, who took home the coveted award of best large brewery at this year’s World Beer Cup. Face it, our region owns it. We welcome all and even enjoy traveling to other parts of the country for craft beer, but at the end of the day, if we’re really honest with ourselves, we can’t help but admit that there really is no place better (at least that I’ve been to, and I’ve been to all over) than the Pacific Northwest when it comes to great beer and beer culture.

So with this being said, I must divulge that I am leaving my home in Portland, OR and head south. Why you ask? Well, even more important than beer, and yes, beer is very important to me, is the love of my wife. When I met Ashley V. Routson last year, my life was changed forever (Read more about this intelligent, talented, loving, and beautiful woman here). So, this week, Ashley is coming to Portland from Berkeley, CA with Bison Organic Brewing founder and brewmaster Daniel Del Grande to scoop me up and take me away to start a life together. During their week-long stay in town, we’ve organized some fun tasting events showcasing Bison’s beer. Then on May 27, 2012, my last day in Portland, we will celebrate the first 3.5 years of Brewpublic with a KillerBeerFest at Bailey’s Taproom. I’ll get to those  events in an upcoming post, but for now, I just want you all to know that it’s been an honor living here and knowing all of you. I plan on returning again and will miss you all very much.