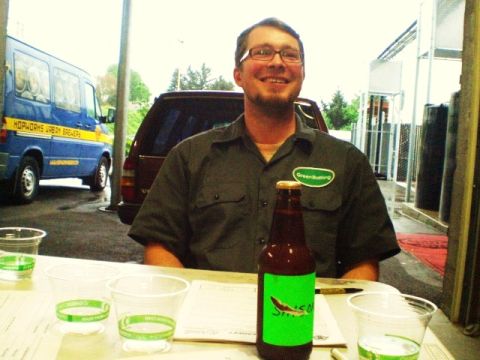 I’m honored that Angelo has asked me to be a contributor to Brewpublic, and I’m hoping to add another interesting perspective to this already awesome publication.  Currently, I find myself living in two beer worlds with a lot more gray area between them than most people would think:  I am an avid, experienced homebrewer, and also a beginning professional brewer.  I’m also new to Portland; I moved here in September to find brewing work.  This was the first time I had ever heard of an event like Portland’s Cheers to Belgian Beers (PCTBB).  I can’t think of any other festival that has a premise quite as enticing to me; I love the fact that both pro brewers and homebrewers participate, and the community involvement gives it a true “family” feel.

I was very impressed with many of the beers at the PCTBB festival, but it left me thinking, what about the 70+ homebrew entries that were submitted?  I entered 2, both of which I am happy with and which scored well, but neither of them placed.   So it was partly from greed (me wanting to taste some awesome beers) and partly to show the readers of Brewpublic that homebrewers can bring it strong, that I invited a group of PCTBB homebrewers over to my place last night for a “round table peer review tasting”. 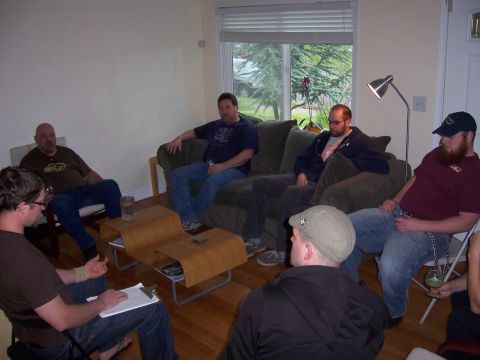 We sampled 12 beers in total, which were brewed by 14 homebrewers (some beers were collaborative).  Interestingly, all the beers used the Wyeast 3726 Farmhouse ale yeast exclusively.  None had any additional funk added, which made it a better tasting for getting a feel for the yeast strain.  Everyone was encouraged to provide feedback, descriptive commentary, and even constructive criticism.  Here’s what we came up with:

“Wittie The Poo” Belgian Wit (Specialty Ale) with rose water, orange blossom water, and lactic acid added at bottling. O.G. 1.060, F.G. 1.010, 6.7% ABV, 16 IBUs.  Fermented in the mid-70’s.  Nice esters and notable tartness in aroma, not much rose after 1 month in the bottle, but Josh said it was very perfumey early on.  Moderate sourness in the flavor, which was well integrated with the beer, not harsh, as I have heard can be the case with beers using straight lactic acid to sour.  Bready wheat quality and some clove.  One taster noted a “candy cigarettes” flavor.  It’s been a while since I’ve had those so I couldn’t really say… 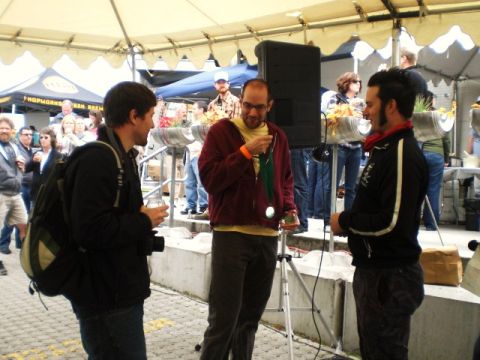 “Back in the Saddle Dubbel” – 2nd place in Belgian Strong Ale category – O.G. 1.075, F.G. 1.012, 8.4% ABV, 25 IBUs.  Brewed with homemade candi sugar in the boil and a few days into fermentation .  Fermented in the mid-70’s.  Apple esters (red apple as opposed to green apple-acetaldehyde), and noticeable caramel in the nose, as well as a complex ester/alcohol profile.  Flavors were peppery, somewhat malty, cherry tobacco notes were picked up by one taster.  Not as malty as aroma would have suggested, finish was dry and drinkable. 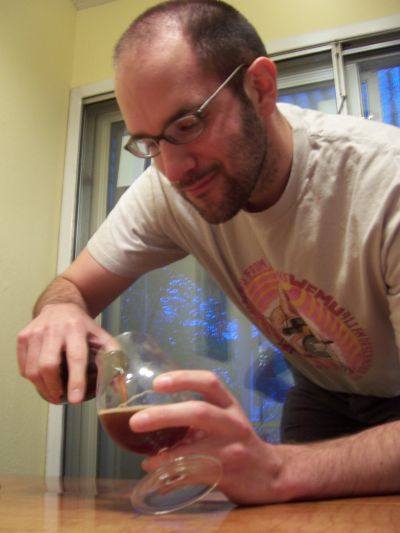 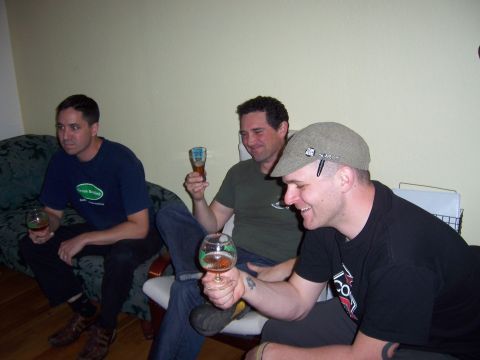 Saison – 1.065 O.G., 1.010 F.G., ABV 7.3%, 25 IBU.   No spices, fermentation started at 70 with an upward ramp to 85.  Light colored, vivacious, bubbly body.  Aromas of bubblegum, banana bread, strawberry.  Flavor was light in malt, somewhat hoppy and yeast character-forward.  Creamy mouthfeel with some bitterness in finish.  Duane brought his scoresheets from the competition with him, it turns out that Angelo and I judged his beer!  Luckily we didn’t rip him a new one…we gave it an average score of 39.  It was one of our 2 top beers in the flight of 9, and I’m pretty sure it went on to get 2nd or 3rd on the mini-BOS table (there were 27 saisons entered in the competition).

Belgian Pale Ale – 3rd place Belgian & French Ale – 1.055 O.G., 1.010 F.G., 5.8% ABV, 35 IBUs.  2-row pale and crystal 40 malts, all late-hopped with Magnum and Palisade.  Amber colored, some hops and light sulfur in the nose, nice ester profile.  Gentle, subtle and drinkable, with the crystal 40 providing a pleasant caramel sweetness to balance the hops.  Everyone agreed this was a very balanced, easy to drink beer, which is exactly what Belgian Pale Ale should be.

Saison – brewed with white peppercorn – no stats were provided, but that’s OK.  Orange in color, some noticeable acetone and “funk” in the aroma seemed to indicate a not-ideal fermentation.  The flavor had some caramelized notes and a distinguishable, and very well done white pepper flavor.  It was well balanced with the beer and left a pleasant warming sensation on the back of the tongue and throat that stuck around for a while, but was not overdone. 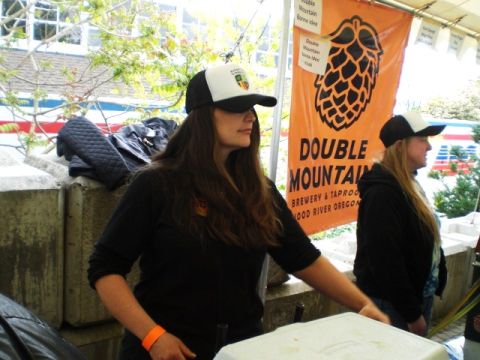 “Saison Ferme” Saison – brewed with Indian coriander, Seville orange zest, chamomile, and grains of paradise – 1.059 O.G., 1.002 F.G., 7.6% ABV, 25 IBUs.  Light colored ale with an enticing blend of spices in the aroma.  Some of the spice character led me to question whether there was brettanomyces in this beer, but I think it was just throwing some similar fruity/perfumey aromas.  A pleasant chamomile-tea aspect was noticeable in the flavor, as well as a zingy Seville orange twang.   The spice combination was very harmonious.  The consensus was that this should have probably been entered as a Belgian Specialty ale, as the spices were too up-front in the flavor for a saison. 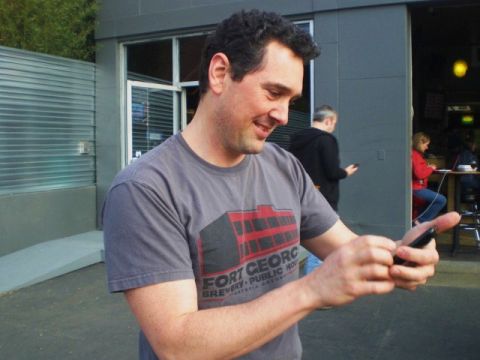 Saison – brewed with 1 kilo Mexican Pilloncillo sugar, first runnings were boiled down like a Scottish ale, and fermented on 2 lbs. used chardonnay grape skins. 1.070 O.G., 1.002 F.G., 9.1% ABV, 25 IBUs.  A ruby-red, clear beer, with some noticeable white-grape and tartness in the aroma.  There was a caramelized flavor to the wort, from the practice of purposefully scorching the first runnings.  Some tasters liked that caramelized flavor and others not so much, but it was agreed that with the strength and color of this beer, it would have done better as a Belgian Specialty ale than a saison.  I didn’t realize how strong this beer was until I plugged in the numbers on an ABV calculator, way to go on a very clean fermentation!

“Mercator” Belgian Dark Strong – mostly organic ingredients, caramunich, aromatic, pale chocolate malt, rapidura sugar – 1.083 O.G., 1.017 F.G., 8.8% ABV, 26 IBU.  Fermentation started at 80 with a ramp to 90+ degrees!  Really nice earthy, estery aroma with some caramel.  Some tasters picked up on a cigar or subtle smoky component in the aroma.  The flavor was smooth and fairly sweet to begin with, but dried really nicely at the finish, which was clean and not hot or cloying.  I’m really surprised how warm this beer was fermented, especially at the start of fermentation, and still produced a clean ferment, not fuselly or harsh at all.  Not many yeasts, even Belgian yeasts, could do that.

“Funky Delight”, Belgian Dark Strong Ale – 1st place in Belgian Strong Ales and BEST OF SHOW – O.G. 1.081, F.G. ?, ? ABV, 33 IBU.  Pale malt, Special B, Munich, and oat malts, also amber candi sugar.  Hopped with Sterling.  Fermented at 65 degrees, not getting hotter than 68.  Caramel-red apple aroma, some vanilla noted.  Very balanced and complex, reminiscent of St. Bernardus.  Clean alcohols, not hot at all.  The oats seemed to lend a very welcome creaminess to the beer too.  Way to go guys on your first Belgian beer!   BOS is not a bad place to start. 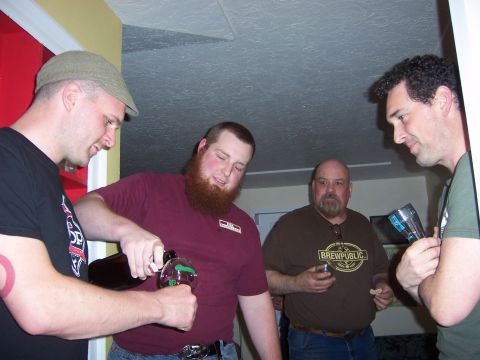 “Belgian Bitter dry hopped with Sterling” – Belgian Specialty Ale – 1.067 O.G, 1.010 F.G., 7.5% ABV, 60 IBUs.  Pilsner, pale, and a pinch of aromatic malt.  Bittered with Nelson Sauvin, finished with Perle, Hallertauer, Styrian Goldings, and dry-hopped with Sterling. Ferment at 68 with a ramp to 82 over 10 days.  This beer was kind of an homage to De Ranke XX Bitter, but it ended up tasting nothing like it!  Still, I am very pleased with the results.  I have to say I have some reservations about reviewing my own beers, but I’ll give it my best to base it off of the other tasters’ comments.  Hazy orange color with nice head & retention.  Orange, tangerine, and resin were all picked out in the aroma.  Tons of citrus in the flavor and also some resin and grassiness.  Moderate malt, some acidity from yeast strain, which some tasters thought clashed a little with the hops.  One taster said it reminded him of an “Arnold Palmer”, half lemonade and half tea.   This beer scored well in competition, but the criticism was that it was not “too malty, not bitter enough”.  I should have known better than to use that word!   Most everyone agreed it would have done better if I had called it a “dry-hopped super saison” or just a “dry hopped Belgian ale”.

“Cascadian Dark Saison” – Belgian Specialty Ale – 1.063 O.G., 1.008 F.G., 7.3% ABV, 55 IBUs.  Pilsner, Munich, caramunich, and carafa special III malts, bittered with Magnum, Crystal & Amarillo for flavor and aroma.  Started fermentation at 68 and ramped to 74 for a week, then finished out at 80.  If there were one beer that would properly pander to the Portland beer judges, you’d think this would be it!  Black, clear with ruby highlights and a long-standing tan head.  Aroma of subdued Belgian esters, cocoa, and white grapefruit.  Flavor was hoppy, with some light roastyness coming through but not astringent.  Very well received by the panel!  Some people were surprised that it even used the PCTBB yeast, because it was very clean. I thought it could maybe use less hop aroma and bitterness from the get-go, but some tasters said “add more hops!”.  Judge comments were very sparse on this one, but scores were very good, a 41 and a 42.  It will be interesting to see how this ages as the hops drop out and it becomes maltier. 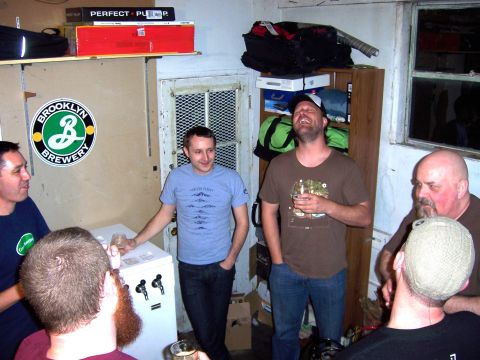 Once again, thank you to everyone who participated!  Maybe we can do more of these in the future.  Overall I think we learned some things about the Wyeast 3726 Farmhouse strain (which by the way I’m pretty sure is an isolate from the Blaugies brewery).  It is a great performer, producing a clean beer quickly, and can even be fermented fairly hot.  There is a common red apple aroma found in many beers brewed with this yeast, some tartness, and also some noticeable sulfur, at least when the beer is young.  It may take additional time to vent the sulfur, or racking through copper, as I know some pro brewers do to reduce sulfur.