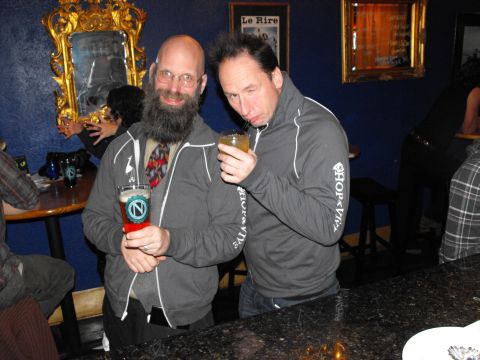 Here’s a press release we received today from publican Jim Parker. Can you believe it?!:

The pair finalized the deal with Hop & Vine founder Yetta Vorobik earlier this week and announced it during a Ninkasi Brewers Night at Bayou on Bay, the Bellingham bar where Parker currently works. The two joined for a successful fund-raiser “Jamie Floyd and Jim Parker Take Over The Hop & Vine,” in December of last year.

“I’m totally stoked,” Floyd said of the new partnership. “I’ve known Jim for more than 15 years and as far as I’m concerned there is no one who belongs behind bars more than him. As for me, this will give me a chance to get back to my roots and work in the kitchen.”

Floyd was a cook at Steelhead Brewery before joining the brew staff in 1994. He rose the position of head brewer at Steelhead before opening Ninkasi in 2006.

“For me, it was just time to make a change,” said Parker. “For the past year, I have been primarily making cocktails. I have really wanted to get back into the beer world.”

Parker is a former partner in such Portland beer bars as the Green Dragon, Oaks Bottom Public House and the Belgian Embassy. Prior to that he was executive director of the Oregon Brewers Guild and has also worked as a brewer, publican and director of the American Homebrewers Association in Colorado.

Vorobik opened The Hop & Vine in August of 2008 and recently expanded its bottleshop.

“I’m just tired,” she said. “This is not an easy business to run and it has worn me out. When Jamie and Jim did the fund-raiser last year, we joked about making it permanent. But a month ago we actually started a serious conversation.

Vorobik says her plans are to take a vacation in Spain and then decide what is next.

Floyd and Parker will officially take over The Hop & Vine on June 31, pending licensing approvals.