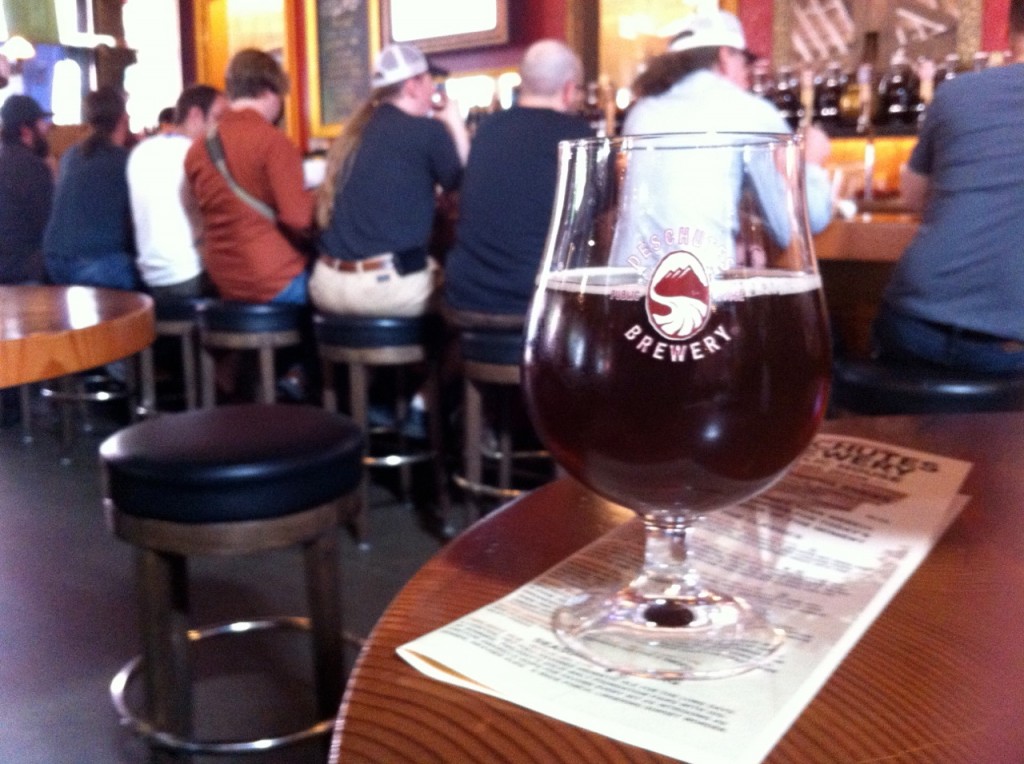 The day finally arrived for the much-anticipated collaborative beer, “Collage”, from two of Oregon’s most coveted breweries, Deschutes Brewery and Hair of the Dog Brewing Company. As was previously mentioned here on Brewpublic, the official bottle release is took place on May 15, 2012 at both the Bend and Portland Deschutes Brewpubs. After this initial release the bottled beer will be making its way through the Deschutes distribution system but availability will be extremely limited.

Two years in the making allowed this blend of four barrel aged beers to mature to a very complex sipper. Collage is comprised of Deschutes’ The Dissident and The Stoic and Hair of the Dog’s Fred and Adam. 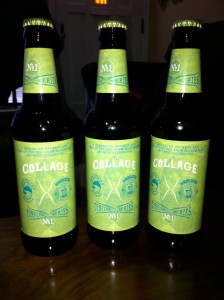 From these four barrels a blend was made to produce Collage, a beer that comes in at 45 IBU’s and 11.6% ABV. 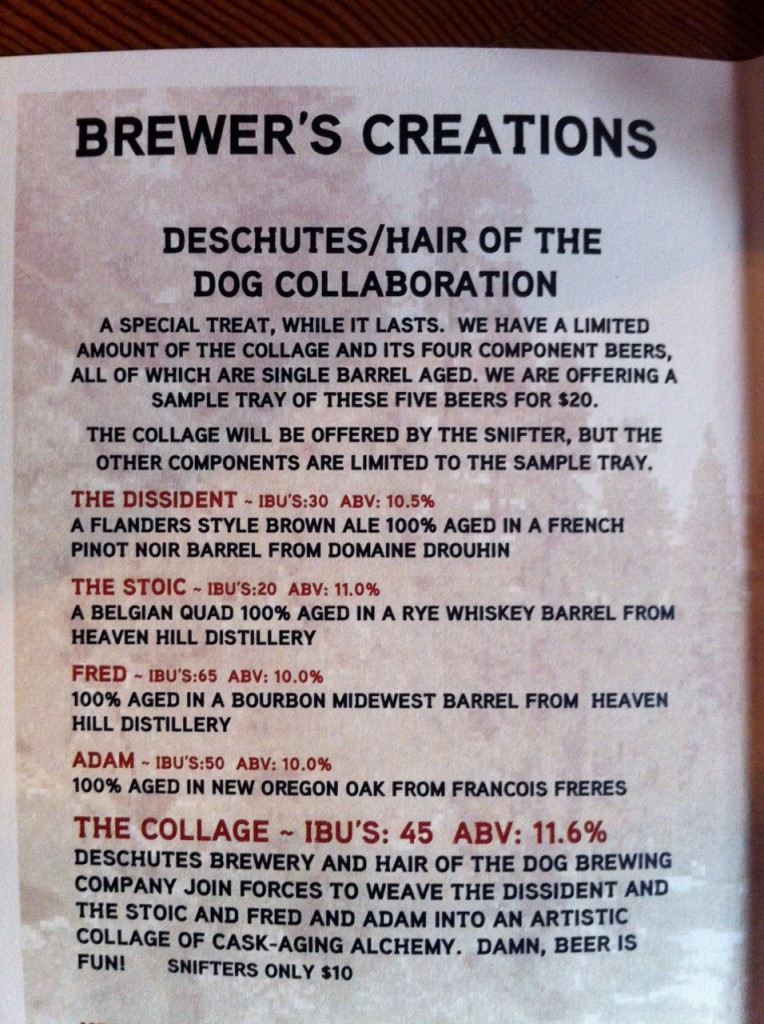 Since I was anticipating this collaborative beer I arrived at the Portland Deschutes Brewpub close to 11am opening to make sure I’d walk away with my 3-bottle limit, one for me and other two for some lucky friends of mine. I had heard that the line started to form before 10am and dissipated by 11:30 with the usual Portland diehards waiting patiently so they too can get their hands on their small allotment of the 75 cases being sold today. After scoping out the line I decided to bypass it in favor of going straight to the bar area and ordering my bottles to go after getting the opportunity to taste a snifter of Collage. There were quite a few patrons tasting the 5-beer taster tray (4 blend beers plus the final Collage). I opted on the more economical approach and just going head first into the larger portion pour of the Collage.

Once I received the snifter of Collage it seemed a bit cold to touch so I let it sit for a bit while reviewing the ever-evolving Deschutes Beer List for the day.  Well back to the beer, the appearance is of great beauty, an almost mahogany color with no noticeable carbonation. The aroma is of some tartness along with some faint whiskey notes.  The mouthfeel is very pleasant. At first the tartness of the Pinot Noir was very prevalent and as the beer warmed up the whiskey characteristics came forth. 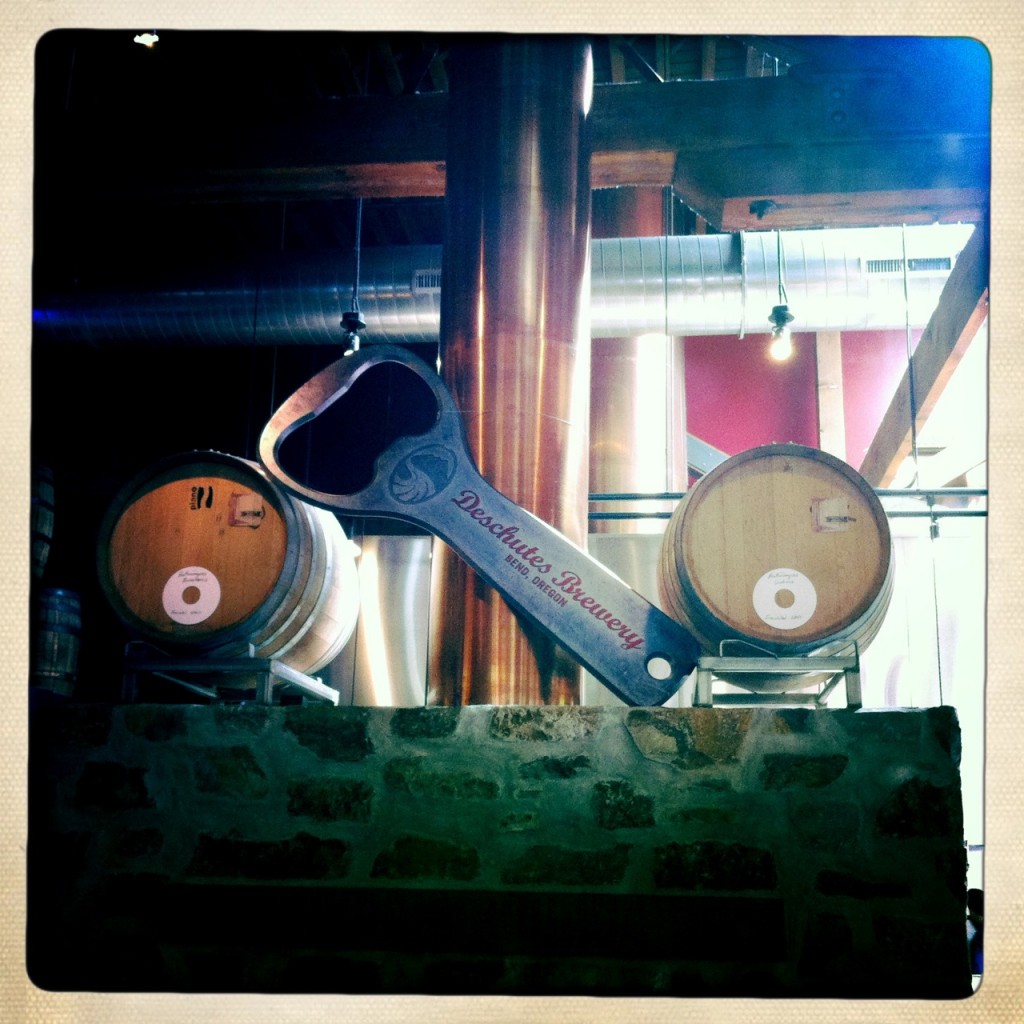 This blend has done well at disguising the higher ABV. An overall great drinking beer and one that is worthy of acquiring. I will be looking forward to pulling my bottle out in another year or two.

Collage is available today at Deschutes Brewpub for carry out in 12 ounce bottles at $12 each with a 3-bottle limit and on draft served in a snifter for $10 at Deschutes. They are also offering up a taster tray of the 4 blends and the final blend for $20.