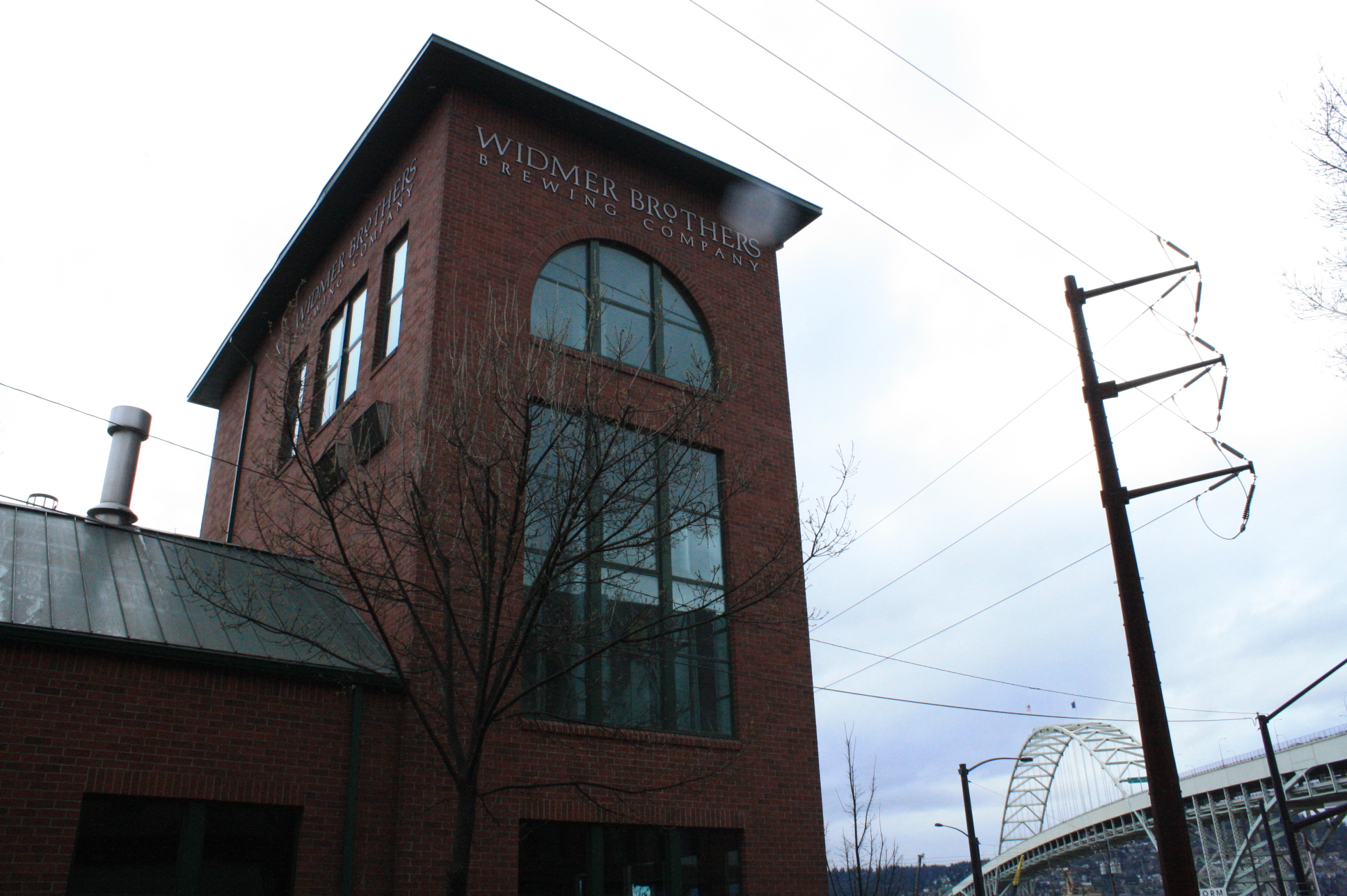 Last time, we left off with Rob talking about Widmer’s revolutionary American Hefeweizen.  Here, we continue with more Q & A with the Bros’ co-founder and learn about more of what has made Widmer tick over the past 25 years.  Where we pick up in this installment, we are still asking him about the history of the flagship Hefeweizen.

When you created the recipe for the Hefe, did you take a look at what Hart Brewing (now Pyramid) was doing with their Wheaten Ale, one that claims to be the first full-time wheat ale on tap in the Northwest?

Rob Widmer: We were certainly aware of that beer. It’s kind of funny.  Tom and Beth Hartwell were the original owners, and we all usd to buy truck loads of malt together. All of the local breweries did.  We ended up kind of being the house on that.  We’d arrange for shipping.  Everyone would pay us and then come and get their grain or sometimes we’d run it up to (them). So we kind of knew that Tom was working on a lot of that.  I think we rolling in at just about the same time.  They knew we were going to do it, and we knew they were going to do it.

Who came up with the idea of putting lemon in the Hefeweizen?

RW: Widmer Weizen predated (the Hefe).  When we started, we were doing a filtered version only. We did an Altbier, then we introduced Widmer Weizen. In the mid-80’s, and this probably sounds crazy to you guys because the market has changed so much, but for most people, there were two kinds of beer.  There was light beer, and there was dark beer. Light not meaning caloric light, but light meaning blond, filtered.  And then dark meaning Henry’s Dark, or something like that.  Most people didn’t want anything to do with the dark beer…You couldn’t even get them to try it. And, our Altbier, while by today’s standards isn’t much darker than (an IPA), fell into that dark category.  Widmer Weizen was clear, so you could see through it. It was deeper colored than a Bud, Miller, Coors, so people were a little skeptical, but they would try it.  When they’d try it, they tasted it and they liked it. From there, The Dublin Pub, which still exists, the owner Carl Simpson who passed away some years ago, he wanted us to do a third beer for him.  We had two fermenters.  We were doing the Alt and Weizen. We couldn’t afford a third fermenter.  But we knew the Germans offered their beers filtered or unfiltered, so we just skipped filtration, and sold it to Carl as Hefeweizen. It kind of blew people’s minds, because no one had seen a beer that looked like this. So, it got people’s attention, and it still works today when we are in new markets. If you can get people’s attention, that’s half the battle.  Then, if you can get them to try it, history shows that once they’ve tried it, they like it…or at least enough of them so that we can go for 25 years.

In the early years of Widmer, what was the temperament of the craft brewing community with brewers like BridgePort and a few others-a tightknit community versus how it has changed today?

RW: Like I said, we got together and shared loads of malt.  We were all pretty darn busy. One of the first things was all getting together and going down to visit the state legislature and lobbying, first off, to allow us to brew.  So there was cooperation there. There’s always been, certainly in Oregon, a good working relationship between the brewers.  The Oregon Brewers Guild is by far and away the best and most active and most supportive guild in the nation.  It’s a always been competitive, but a testament to us always getting along. When we started, we were on (NW) 14th and Lovejoy and had no idea that BridgePort was right there on 13th and Marshall. That was by total coincidence. The kind of cool thing is that Karl Ockert was one of the first brewer back there, and so is Matt Sage. We just had lunch with them, and have lunch with them every couple of months. It’s fun to get together and reflect on the way things were…and are. I remember a while back talking to some other brewers in another state and they were like “We can’t even be in the same room together or we’d be at each other’s throats.” 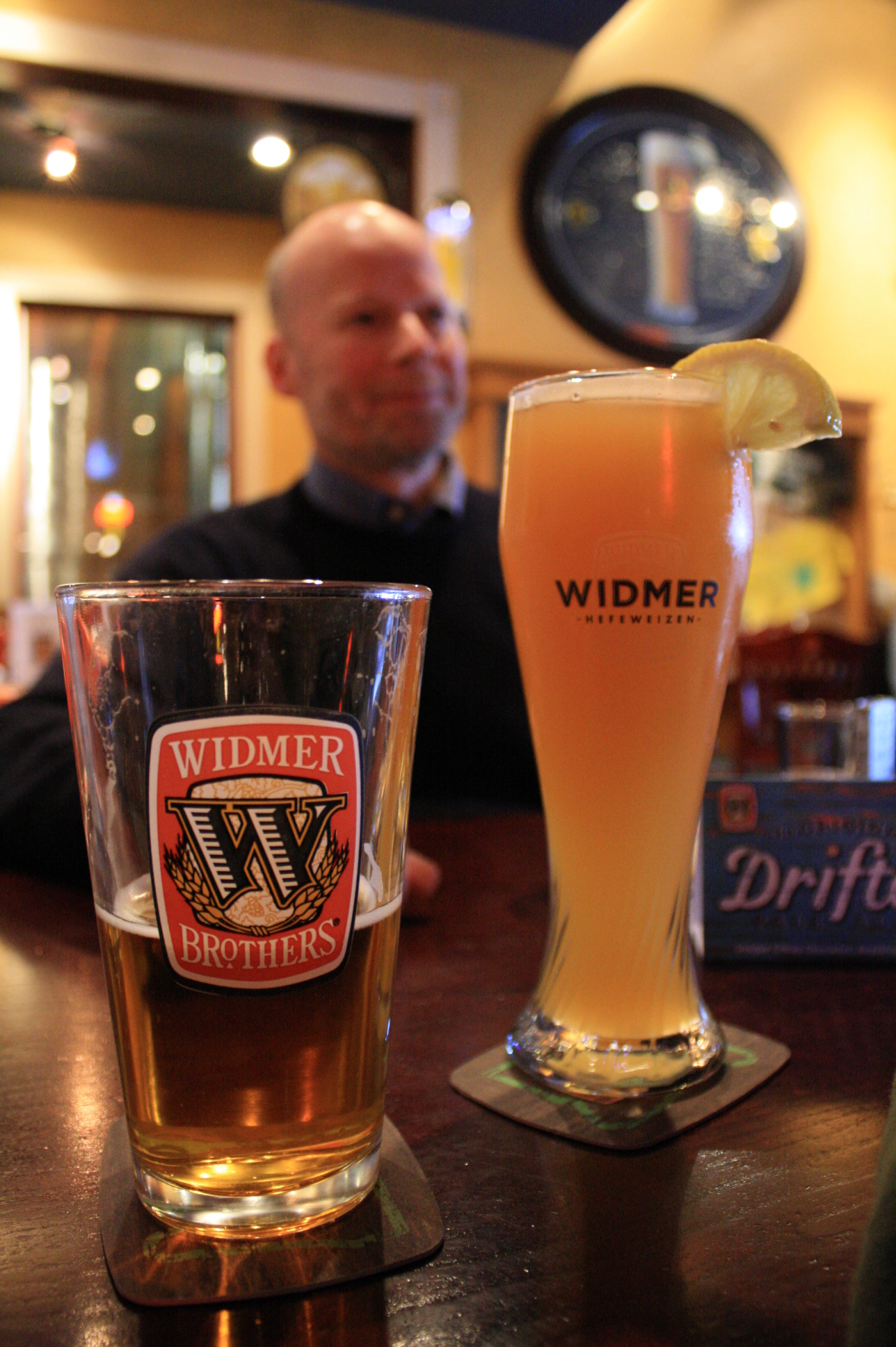 On a completely different topic, how do you feel green energy fits into the operation of a brewery? Is it cost effective? Does it make sense? Or do you think the idea just correlated to marketing?

RW: I think brewing is a really green indeavor. Most of our waste is food. And good brewing practice means capturing BTU’s where you can, reusing things, conserving on water…I was at a seminar a while back, and we use about 4.5 barrels of water per barrel of beer, which I hadn’t followed until then, but happens to be a really good rate. Brewing, in general, is very clean. For Widmer specifically, about 2/3 of our beer is sold in a returnable, reusable container, which is a keg. Other brewers are the reverse of that.  The major brewers only do a small fraction of their beer in kegs. It’s almost all in bottles. Our focus has always been draught. Our bottles are all hopefully recycled. I am a native Oregonian, a native Portlander and I ride my bike to work when I can. I drive a very small used car sparingly and live in a small house because I think that’s the right was to live. Not to get too far off track (laughs), but I think a lot of the problems we’re in right now, as a society, people have been living beyond our means. Ridiculously. People expect to live in gigantic homes and drive humongous cars, and that just wasn’t sustainable. The result is what you see going on around us. Sorry to get off track… But, (with Widmer) we’ve done lots of little things. With the Gasthaus, we were one of the first on board with the Portland Compost Project. Really the only thing that isn’t recycled is some of the plastics that can’t be. We’ve greatly reduced the amount of garbage. It’s a pretty cool process.  I don’t know exactly how they were able to do it. We looked at it years ago, and to make it work then, you had to separate proteins out. This meant that the servers had to scrape certain things, but now they can take napkins, bones, meat scraps, cheese, all that..Now the only thing the servers have to separate is the foil butter pack things. So,that’s a pretty cool thing.  I looked at solar power and the only way it worked…there were humongous tax credits…I really felt flabergasted. They might have been a little screwed up by this, but the amount of power generated by their proposal was so tiny compared to the cost. Even though in five years, it wouldn’t really cost us anything, as a company.  But it costs all of us as tax payers. Willamette Week touched on it, but I have been waiting for someone to say “Wait a minute. Time out. These companies are getting this for free on the backs of tax payers, these tremendous arrays of solar panels at the tax payer’s expense, and what are they getting out of it?” The only thing really, is that you would hopefully be supporting an industry that will continue with breakthroughs where the panels become much more efficient. I was concerned that we would do this and there would be a damning article that said all these companies were really taking advantage of tax payers. It’s interesting that in Germany, where they have a huge solar power industry, the average citizen knows that currently, unless it is heavily subsidized, it really doesn’t make sense. But the average citizen there is willing to pay extra to support it because they know that if it continues, there will be breakthoughs. But here, I don’t think people really know they are paying a premium to pay for these solar panels that these companies are getting. Take away those tax credits, I bet none of those companies would do that. For us, and this still sounds ridiculous, it was a $100,000 investment that the resulting power would light about ten six-foot flourescent light bulbs for a year. $100,000! It was very compelling, because after the first year, half of it was paid for, and by year five, it was free to us, through credits.  But I was thinking, “Wait a minute…ad Rob Widmer, tax payer, my tax dollars paid for that and I think I’ve been ripped off.

RW: We do, but not full-on. Because it is expensive.  These are lean times. But, yes, a portion of our power is through that. We’re Pacific Power, not PGE. They call it their Blue Sky Program.  It’s interesting that some of the practices we’ve done forever, we just haven’t made a big deal out of, and we are realizing that we do need to tell our story. Some of the big retailer like Wal-Mart and CostCo are asking us “Okay, before we buy from you, tell us what you are doing that’s sustainable.” So, we’re in the process, and my brother’s wife is taking this on as a project, of compiling all of the stuff that we do so when the media asks or when a customer asks…There’s now a spot on our web page, too. A lot of things have gone on, but one of the coolest things, we have a team of guys that handle our logistics, so when distributors order beer, it’s really like air traffic control. I’m not really sure how to describe it, but they make sure trucks are loaded and minimize on miles driven with empty space in the back of the truck. Through some software and just some bright people, it’s unbelievable.

Here is where the server stops by to take our order.  I opt for a Hefe. Rob was drinking one, so I figured why not. More to come…stay tuned…