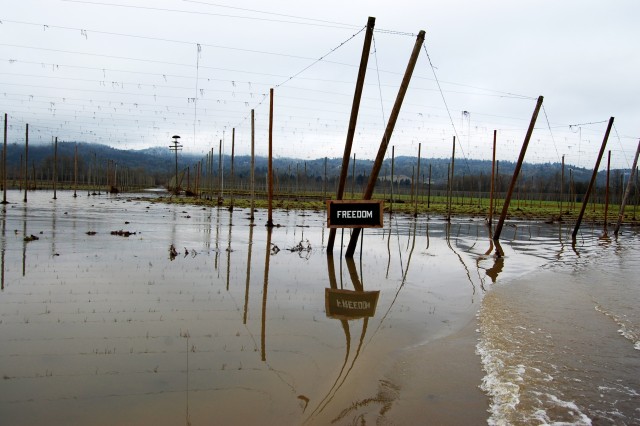 Bad news for the folks at Rogue came down with flooding at their Chatoe Rogue Hopyard in Independence, Oregon that stranding personnel working at the farm. Here’s the news directly from Rogue Ales themselves:

The Chatoe Rogue Hopyard has been declared a Disaster Area after widespread flooding.

The Chatoe Rogue Hopyard is located in Oregon’s Wigrich Appellation near the small, historic hop-growing town of Independence.

The Hopyard borders the Willamette River, which has slowly begun to recede since cresting over the banks early Saturday. Accompanied by heavy rainfall, melting snow and flooding creeks, the water has inundated the roads leading to the Farm, stranding Rogue Farmhand, Natascha Cronin, and Farmstead Brewer, Josh Cronin.

The Cronin’s continue to keep a tight watch on the Farm, which grows a variety of GYO Certified Hops, Rye, Pumpkins, Sweet Woodruff, Berries, Honey and Experimental Barley, as well as 23 Free-Range Chickens, Turkeys and two Pot-Bellied Piglets.

Farming and growing your own ingredients has its disadvantages – you are always at the mercy of Mother Nature.