Brewpublic was invited to visit Vertigo Brewing of Hillsboro, Oregon, a brewery who has just started to get its sea legs in the Northwest market. Founded by friends Mike Haines and Mike Kinion, the brewery is a

quaint one-barrel installation situated in an industrial park off Cornelius Pass Road in Hillsboro, not far from McMenamins Roadhouse Brewery. The two Mikes live in Hillsboro and met at their current day jobs at Intel where Haines has worked for the past 28 years and Kinion for the past 25. “This is what we love to do” said Kinion about brewing. He added: “We used to spend a lot of money at (Beaverton’s) U-Brew before deciding it would make more sense to do this on our own.” A few years and several homebrews later, the two had honed their skills and won an array of competitions for their work including a silver medal in the National Homebrewers Competition for their Altbier. In May of 2008 Vertigo leased their current home. It wasn’t until October of 2008 that they were granted a license to start selling their beer. 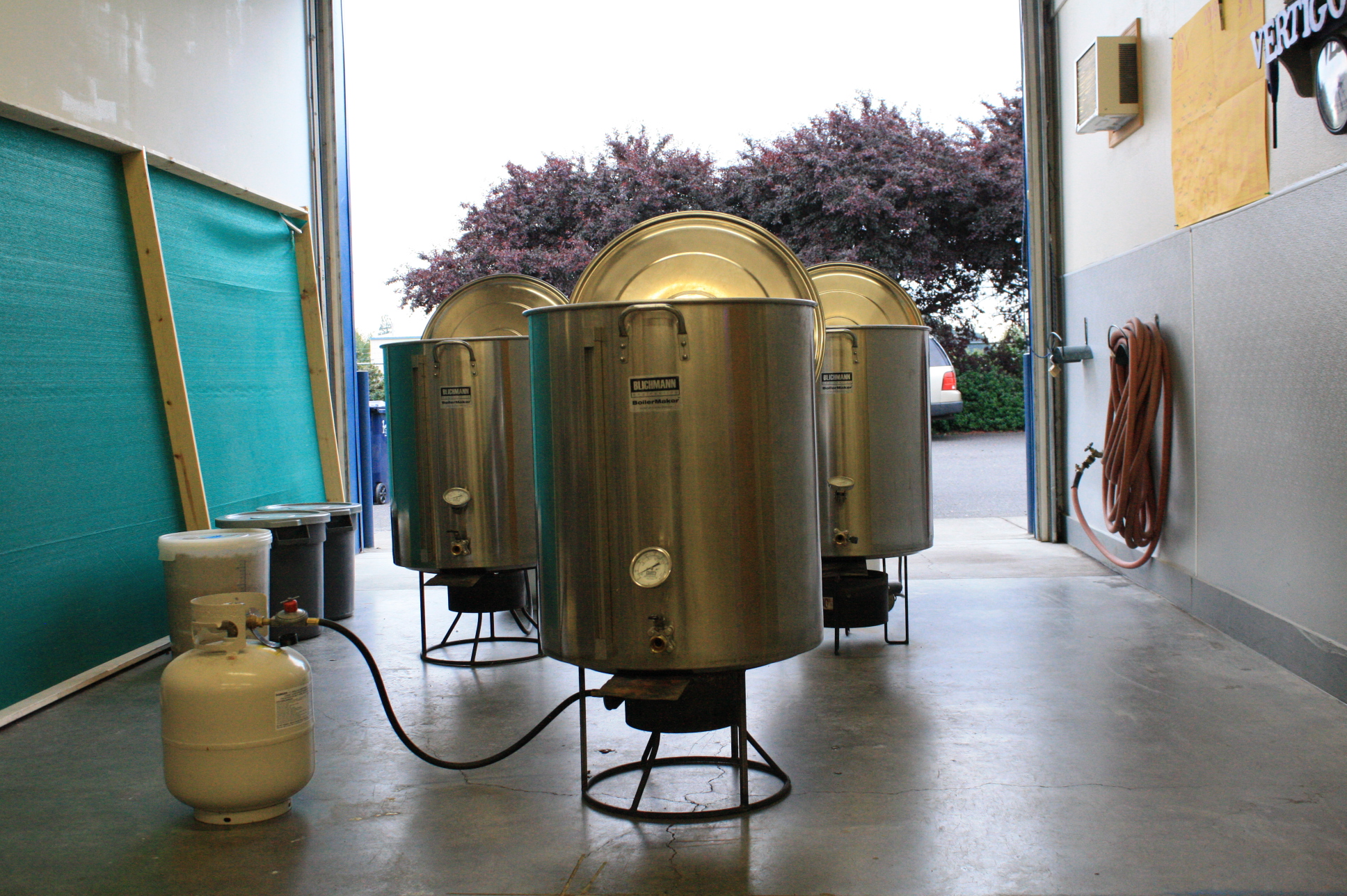 As for the name Vertigo, Mike Haines said “It’s just a name that came up one day and stuck.” Kinion added “When we started homebrewing at Mike (Haines)’s house early on we were on Clearbrook Street and submitted our beers to competitions as Clearbrook Brewing, but later discovered that there was a brewery in Canada that already had that name.”

Today, the two Mikes are getting their feet wet in the local market while trying to keep up with demand at a small brewhouse. They are currently brewing around the clock to produce about 10 to 12 barrels per month. Here’s a look at what’s pouring at Vertigo’s tasting room:

Cyclone Cream Ale: I loved this beer. A light crisp cream ale as God intended with the perfect balance of quaffability and flavor. I am definitely returning to Vertigo for a keg of this one. A light golden hue, this isn’t just another fizzy yellow beer, this is the perfect brew for hot summer days (if they ever return to Western Oregon). This beer features Pale and Crystal malts and is spices with Mt. Hood and Saaz hops.

Apricot Cream Ale: Made from the same base recipe as the scrumptious Cyclone, this beer is far tamer than the sweetly dosed Pyramid Audacious Apricot. No wheat in this beer, like many other apricot brews, the barley really compliments the fruit. A nice touch of creaminess, this beer retains its beer character while giving the casual domestic beer drinker something to enjoy.

Razz Wheat Ale: Produced with a healthy dose of whole raspberries, this is one of the more expensive beers for Vertigo to produce. When we met with the brewers, they had just brewed two barrels of this beer earlier in the day. “Our wives really like it” said Kinion. “Because of this beer, they let us brew in the garage.”

High Altitude Amber Ale: This beer is more aggressive with aromatic hoppiness than most of the others. Citrus Cascades tinge the malty belly with nice balance and complexity, yet, like most of their brews, it possesses a mild alcohol content (5.4% ABV). This beer has the distinct character of a Northwest amber ale. Mildly chewy with a balance of bitterness and aroma. “We had a beer writer come out here and love this beer and insisted we bring it to the Green Dragon for our meet the brewer night there” said Kinion. “She was right, because it was the first of our beers to run out.”

Schwindel Alt: A malty, lagered North German-styled beer with an almost candied bite to it. There’s even a hint of earthy, whiskey malt in there. It is easy to imagine drinking the hell out of this beer come fall when there’s a little nip in the air. Still, this beer is mild enough at 5.1% ABV to enjoy more than just one.

Friar Mike’s IPA: I’ve experienced this beer more than the others. It is often found on tap a O’Brien’s Pub in Hillsboro. A more Englishy India Pale Ale, Friar Mike’s is the alpha dog in the pack. Seasoned with Amarillos, Cascades, and Columbius hops, the bold lupulin levels are nicely balanced by the hardier (6.1% ABV) malt underpinning.

Look for Vertigo at their first beer fest, the Oregon Brewers Festival (July 23-26, 2009), where they will feature their Razz Wheat on tap. It took the brewers eight brew sessions to produce enough beer for this fest alone! You can also find Vertigo’s beers at places like Henry’s 12th Street Tavern, Bailey’s Taproom, East Burn, and O’Brien’s Pub. Future releases scheduled include a Rye Beer and a Vanilla Porter. 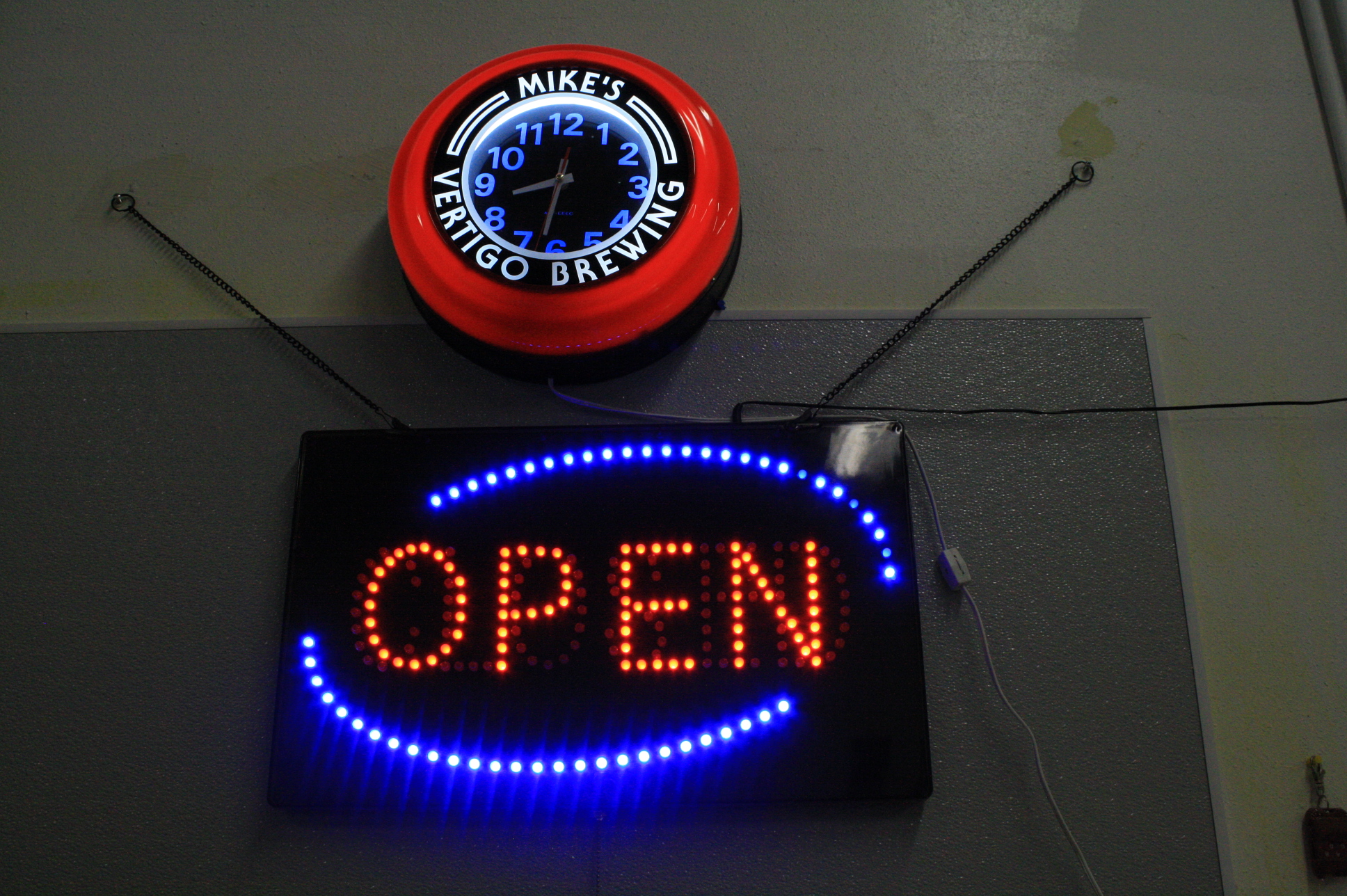 Mike and Mike are eager to expand their enterprise at Vertigo and hope to one day quit their day jobs to focus more on their undeniable love for brewing quality craft beer. While it might seem crazy to open yet another brewery in the seemingly over-saturated Portland metro market, these two fellows are respectfully following their hearts. I sincerely hope they continue to do what they are doing and that you support them by drinking their beer.

Check out a great feature on Vertigo by Matt of PortlandBeer.org.

Here’s a link to the Vertigo Meet the Brewer event at Green Dragon by Bill of It’s Pub Night.

More from the brewers at Vertigo at http://www.vertigobrew.com/.