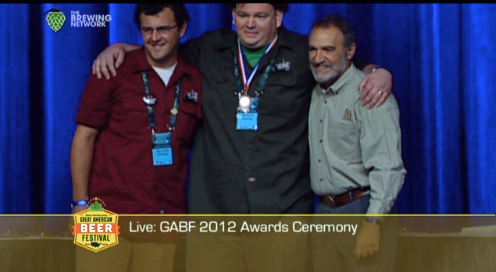 Harvester Brewing is excited to share the latest creation out of their dedicated gluten-free brewery, a Squash Ale made with 200 pounds of a dozen varieties of squash and toasted spices.

The squash was picked from the fields of our friends at Love Farm Organics (46125 NW Hillside Rd. Forest Grove, OR 97116) and cellared for peak flavor. The harvest was then sliced, diced, seeded and roasted in the high tech oven at Jensen’s Bread & Bakeries (3420 SE 21st Ave. Portland, OR 97202), a dedicated gluten-free bakery in our neighborhood. In addition to the flesh of a dozen squashes the roasted and crushed pumpkin seeds were added to the mash.

The Squash Ale was ‘Triple Squashed’ in it’s production with squash added in the mash tun, kettle, and then ‘wet squashed’ in the fermenter. The Squash Ale has been lightly spiced with cinnamon, nutmeg, and toasted coriander to complement the squash flavors and aromas without overpowering the beer.

The beer will be released today at the brewery at an event from 3:30 to 7pm including a very limited amount available on draft at the brewery only. Bottles will roll out to store shelves next week.

Harvester Brewing is a dedicated gluten-free craft brewery founded in 2011. Harvester Brewing’s facility is entirely gluten-free, no gluten is allowed on the premises. It is located at 715 SE Lincoln St. Portland, OR 97214 www.harvesterbrewing.com