The latest in BridgePort‘s Big Beer Series, Stumptown Tart, will be released on June 25, 2009. According to a press release from Molly GIlbert of the brewery’s promotion team, R-West, this year’s beer “This logo is different from last year’s Stumptown Tart because we are using 2,000 lbs. of Yamhill County cherries instead of the Marion berries that were used in the recipe last year.” 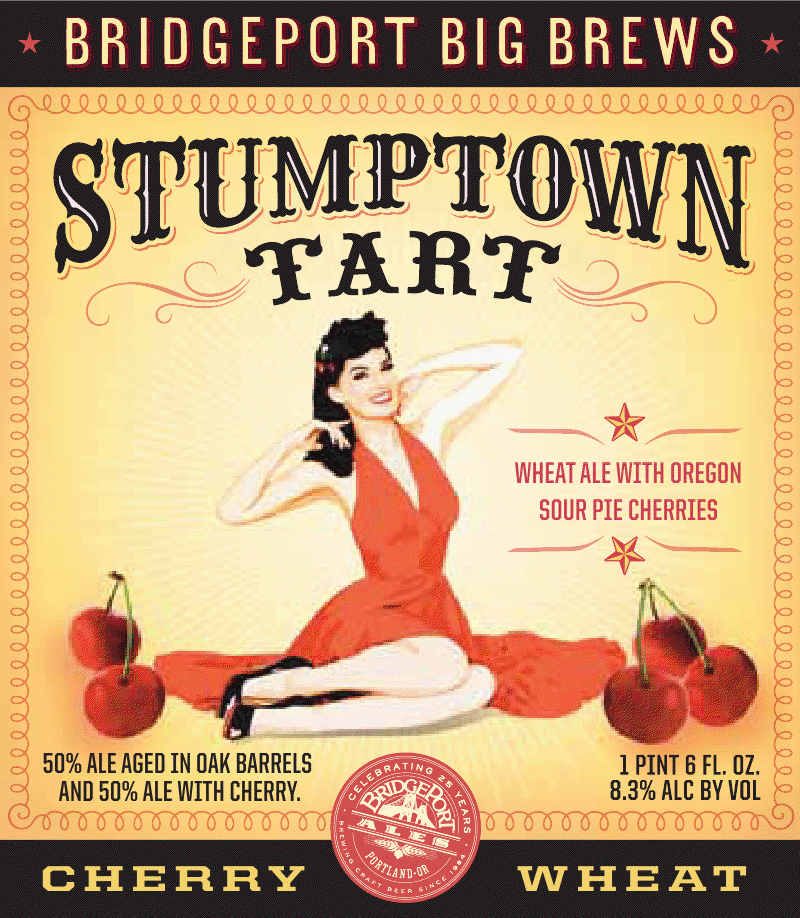 Here’s more on this beer brew from the source:

BridgePort will host a Stumptown Tart release party Thursday, June 25 from 5:30 p.m. – 8 p.m. at the BridgePort brewpub + bakery in the Pearl at 1313 NW Marshall St. Free and open to the public, attendees can be among the first to try free samples of the new brew while supplies last and purchase the limited-edition 22-ounce bottles of Stumptown Tart. Guests will also be given the opportunity to have their bottles signed by pin-up Bernie Dexter, the featured bottle model on the label who will be guest appearing at the event.

At 8.3 percent ABV, Stumptown Tart is a lightly hopped ale made with BridgePort’s Belgian Tripel, an ale aged since January in oak wine casks. This Sour Cherry Infused Belgian Style Ale created and brewed from German Hallertau hops is a perfect indication that summer has arrived in the Pacific Northwest. With 750 cases being brewed, BridgePort’s Stumptown Tart Ale will be sold at BridgePort brewpub + bakery, BridgePort Ale House and at select retail grocery stores throughout Oregon and Washington.

I certainly hope this beer packs a bit more tartness than the inaugural marion berry beer, which wasn’t very sour at all. Kudos to BridgePort for daring to try new and innovative beer styles.