The Commons Brewery has quickly emerged as one of Portland’s most intriguing and imaginative craft beer ventures. Lead by founder and brewmaster Mike Wright, the quaint Southeast Portland brewery has carved a niche for itself not only on the grounds of uniqueness, but also for its bold and unconventional enterprise. The Commons have announced their first bottle-conditioned release in their Beetje Series known as Brotherly Love, a Belgian-style dark strong ale aged in bourbon casks with tart cherries and cocoa nibs. Surely anyone who is seeking after a one-of-a-kind craft beer experience will be pleased to uncap one of these treasures. Here’s the details direct from The Commons: 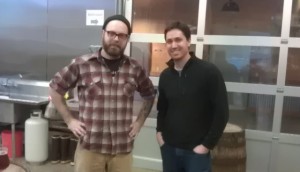 Our first first bottle-conditioned beer is finally ready! On March 24, at Noon, we’ll open our doors to sell the Beetje Series edition of Brotherly Love! Considering our history as a nano-brewery, it’s fitting that our first release is such a small amount.

A variation of our Little Brother Belgian dark strong ale, Brotherly Love is matured in Heaven Hill bourbon barrels with red tart cherries and roasted Peruvian cocoa nibs. Take your time with this rich, decadent beer – and share it with friends.

The Beetje Series is a celebration of The Commons Brewery’s nano roots. First brewed in 2010 on a one-barrel system housed in Mike Wright’s garage, these small-batch beers pay homage to the rustic brewery that continues to inspire our creativity and ingenuity.